“We are excited to say,/A new mystery flavor is on the way./New flavor, new clues,/We confirm the news,” Oreo’s rhyming flyer states. And you know what this means: After two long years of waiting, the time has finally come to tap into our inner sleuth to decipher Oreo’s oncoming clues, riddles and rhymes to guess their new mystery flavor, which could arrive on shelves later this summer.

A few days ago, Best Products confirmed rumors of a new Oreo mystery flavor. The rep told the publication: “For now, all we can share is a confirmation that a new mystery flavor is, in fact, coming.”

The rest of the flyer reads: “Get ready to free your inner detective, you’ll need those skills to be effective. The clues might be riddles, might be rhymes, guess the flavor, for a change to win big this time. There are many more surprises in store, keep an eye on the flip side of summer for more.” So, keep your eyes Oreo’s social media because more info is to come. 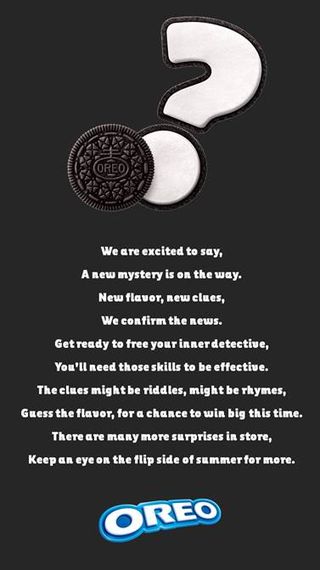 Oreo’s first mystery flavor promotion was in 2017, when many fans of the creme-filled cookie guessed the Fruity Pebbles flavor correctly. With a two-year gap, hopefully Oreo developed a wilder, more unexpected flavor.

Oreo’s mystery flavor news follows its announcement of five new and returning flavors this summer. They include s’mores, Marshmallow Moon, latte, mint chocolate chip and maple cream. But it’s Marshmallow Moon we’ve been eager to get our hands on. You might remember from past reports that Marshmallow Moon was created to help celebrate the 50th anniversary of the moon landing, and we should be seeing those hit shelves very soon; the date of the landing was July 20.

With all this Oreo news and new releases, they’re making it very difficult for us to keep sweets and calories at bay this summer — but we’re not mad at it.