In more than 38 countries for more than 39 years, Ben & Jerry’s have been a staple in the ice cream aisle. And for good reason: Nearly every pint is a creamy, decadent, irresistible 16 ounces of sweet perfection. As much as we hate to admit it, not all flavors are created equal.  With anywhere from 50 to 75 flavors available at any given time, it’s a seemingly impossible task to knock ’em all out of the park; that’s why we spent a lot of time putting in the backbreaking work (read: ate a lot of ice cream) to provide you with the top 11 Ben & Jerry’s flavors for you to try first.

To be fair, we also took into account Ben & Jerry’s reviews, Influenster reviews and Ben & Jerry’s yearly ranking to ensure you have the most accurate list.

Cheesecake fans flock to Ben & Jerry’s strawberry cheesecake pint that doesn’t skimp on the graham crackers. “The sweetness of the cheesecake ice cream, the huge strawberries, and the crunchiness of that HEAVENLY Graham cracker swirl will always be a winner for me,” one reviewer writes. And we agree. 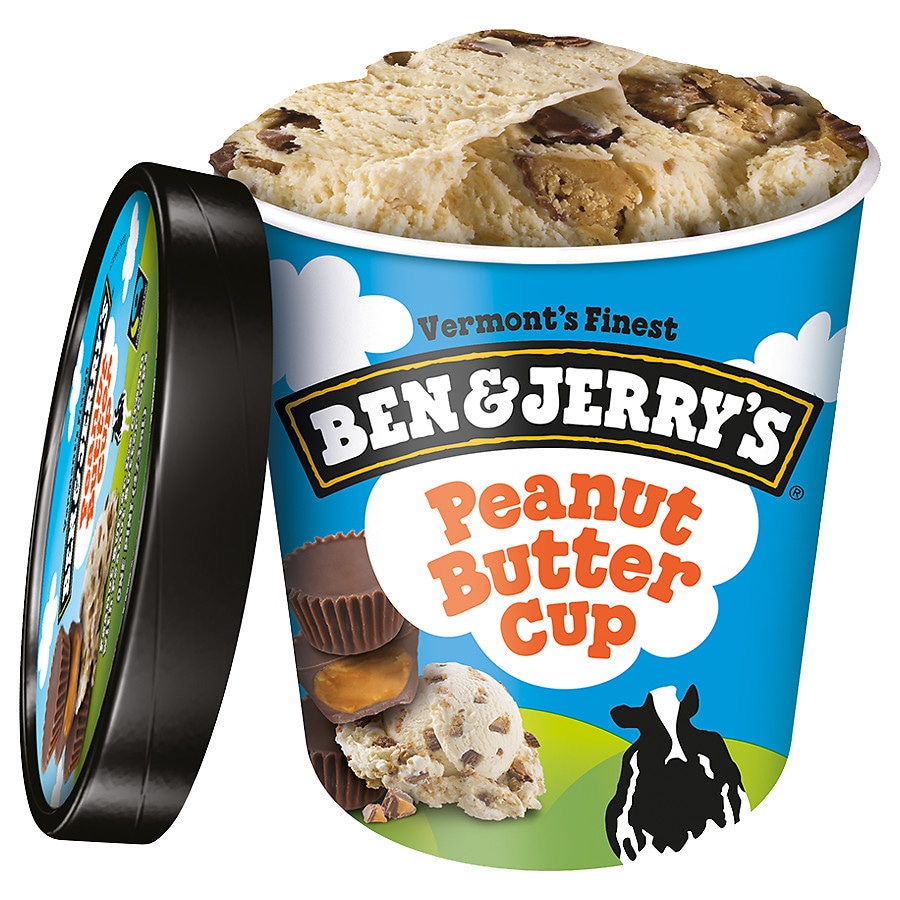 Peanut butter cup is an always-reliable option, though it took some time for the flavor to make its way into Ben & Jerry’s top flavors list. Currently, it sits in the No. 10 position — a first since 2014.

Bourbon and burnt caramel-infused ice cream with almonds and fudge? Count us in. And we’re not alone in diggin’ this flavor; Urban Bourbon has a 4.6 rating on Influenster with one reviewer raving: “It is AMAZING. There are like little tiny almonds all through it so every single bite you’re getting some crunch and you can really smell and taste the bourbon which I love.” 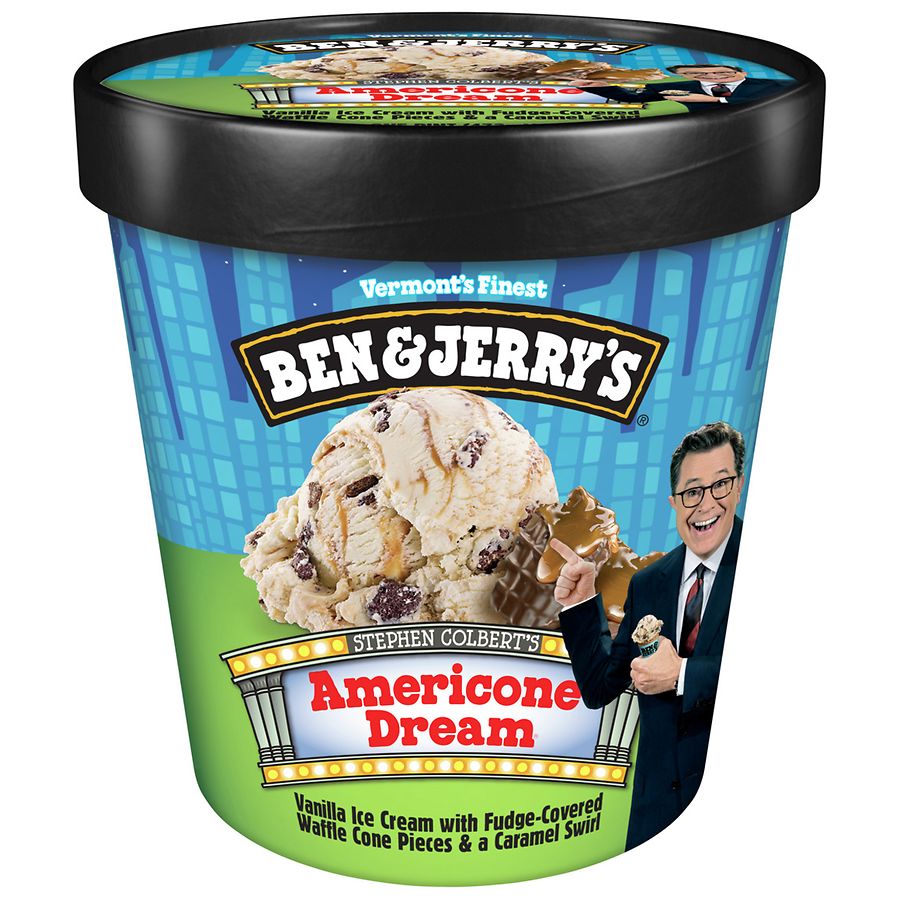 AmeriCone Dream is just that: a dream. This vanilla ice cream, created by The Late Show host, Stephen Colbert, is loaded with fudge-covered waffle cone pieces and accented with a heavy caramel swirl. The best part is this pint supports charities through the Stephen Colbert AmeriCone Dream Fund. So far, it’s raised over over $2 million since 2007. 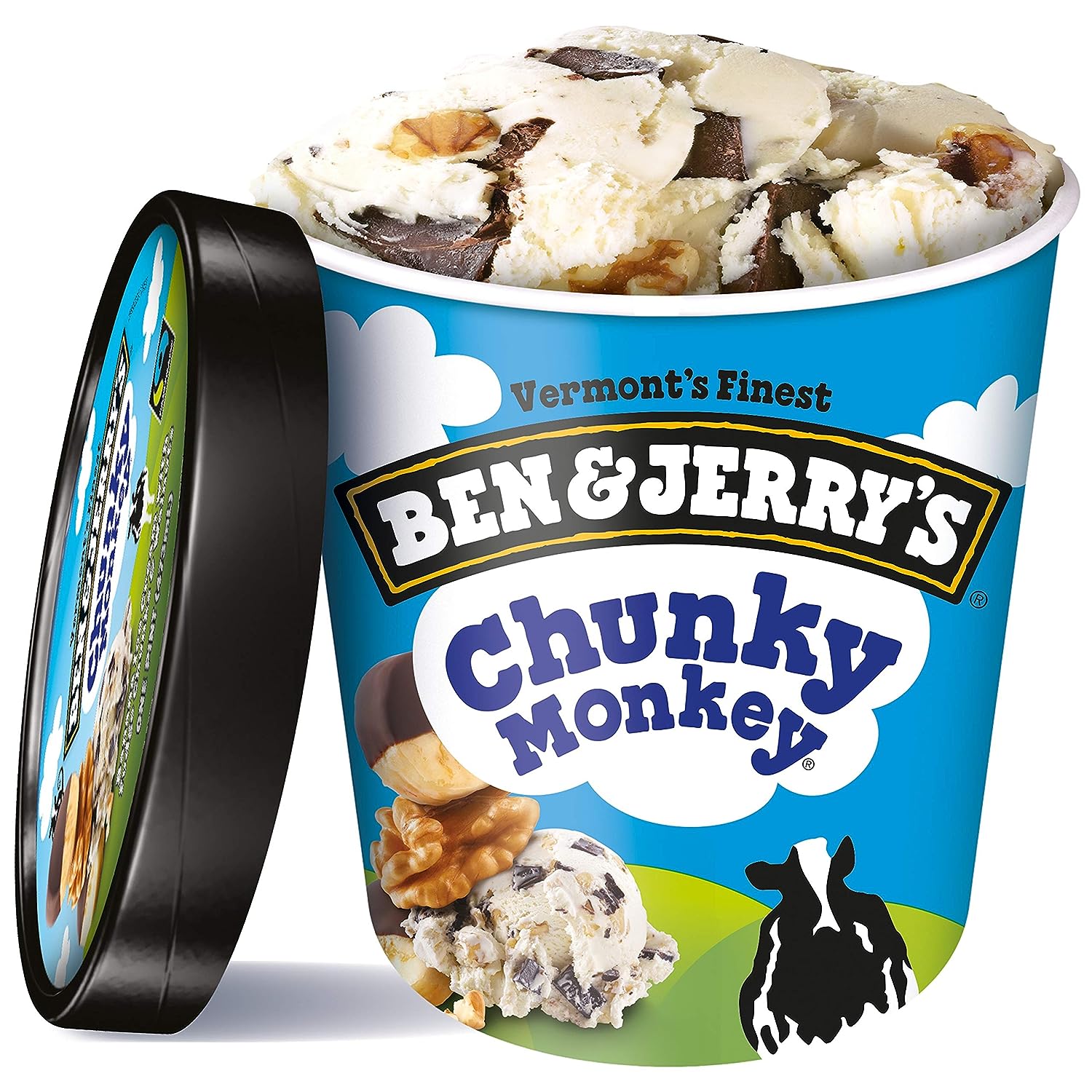 Love banana-flavored treats? Then you’ll go wild over this one. Chunky Monkey has fudge chunks and walnuts in banana ice cream, and it’s currently No. 9 on Ben & Jerry’s top flavors list. This flavor also has nearly 1,600 reviews on Influenster, with an overall score of 4.7 out of 5.

Plus, this flavor is not only delicious with a 4.9 rating on Influenster, but it’s also dedicated to a worthy cause: SeriousFun Children’s Network, a nonprofit organization that hosts 30 camps and programs for children living with serious illnesses and their families around the world — free of charge.

You can’t go wrong with fudge brownies folded into chocolate ice cream. Hailing from Greyston Bakery in New York, this flavor is a popular one, with over 900 reviews and an overall 4.8 rating on Influenster. 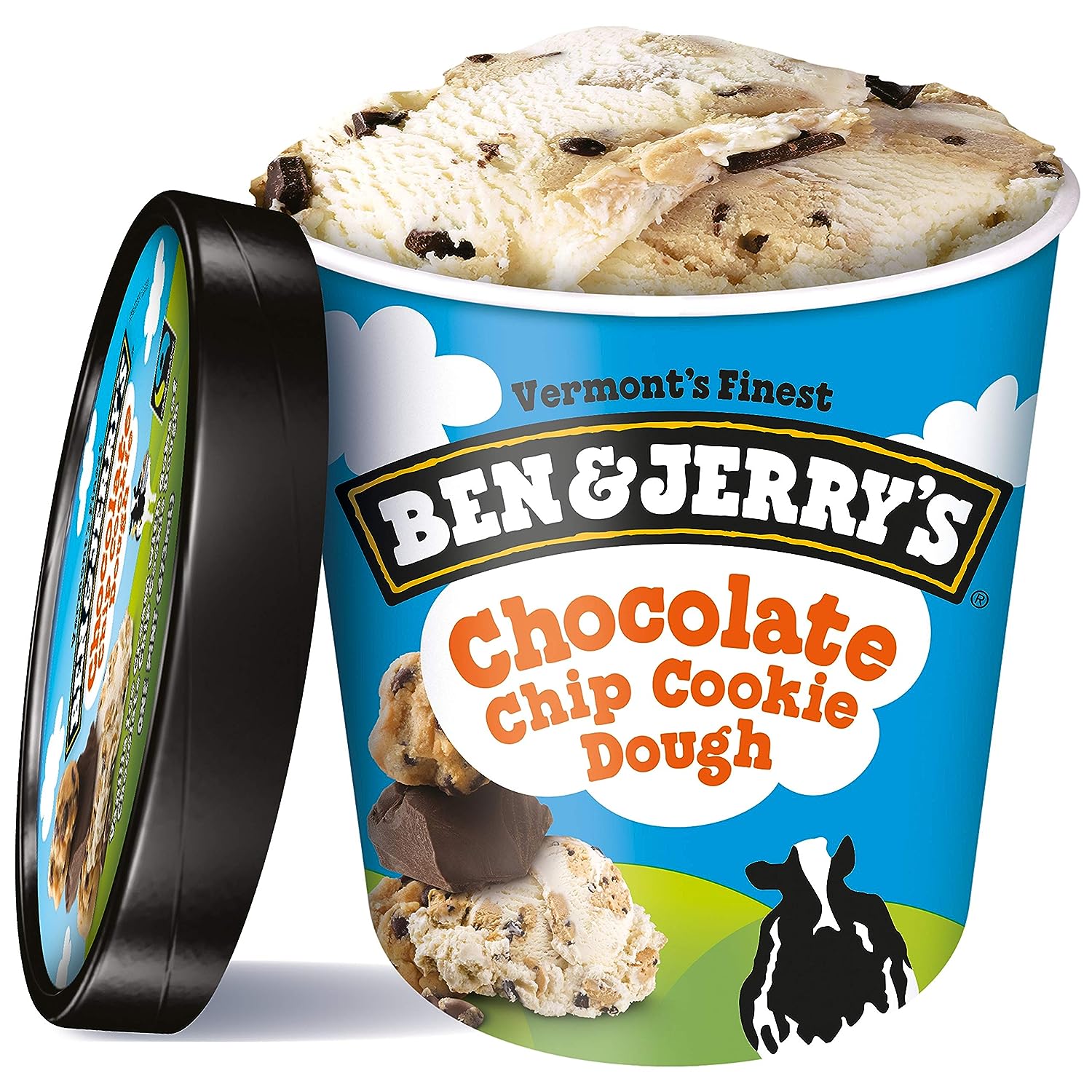 Cherry ice cream with cherries and fudge flakes: Cherry Garcias is Ben & Jerry’s most legendary flavor. A tribute to Grateful Dead’s guitarist, Jerry Garcia, this flavor has ranked No. 2 for five years in a row, has a 4.6 rating on Ben & Jerry’s website and a 4.8 rating on Influenster. 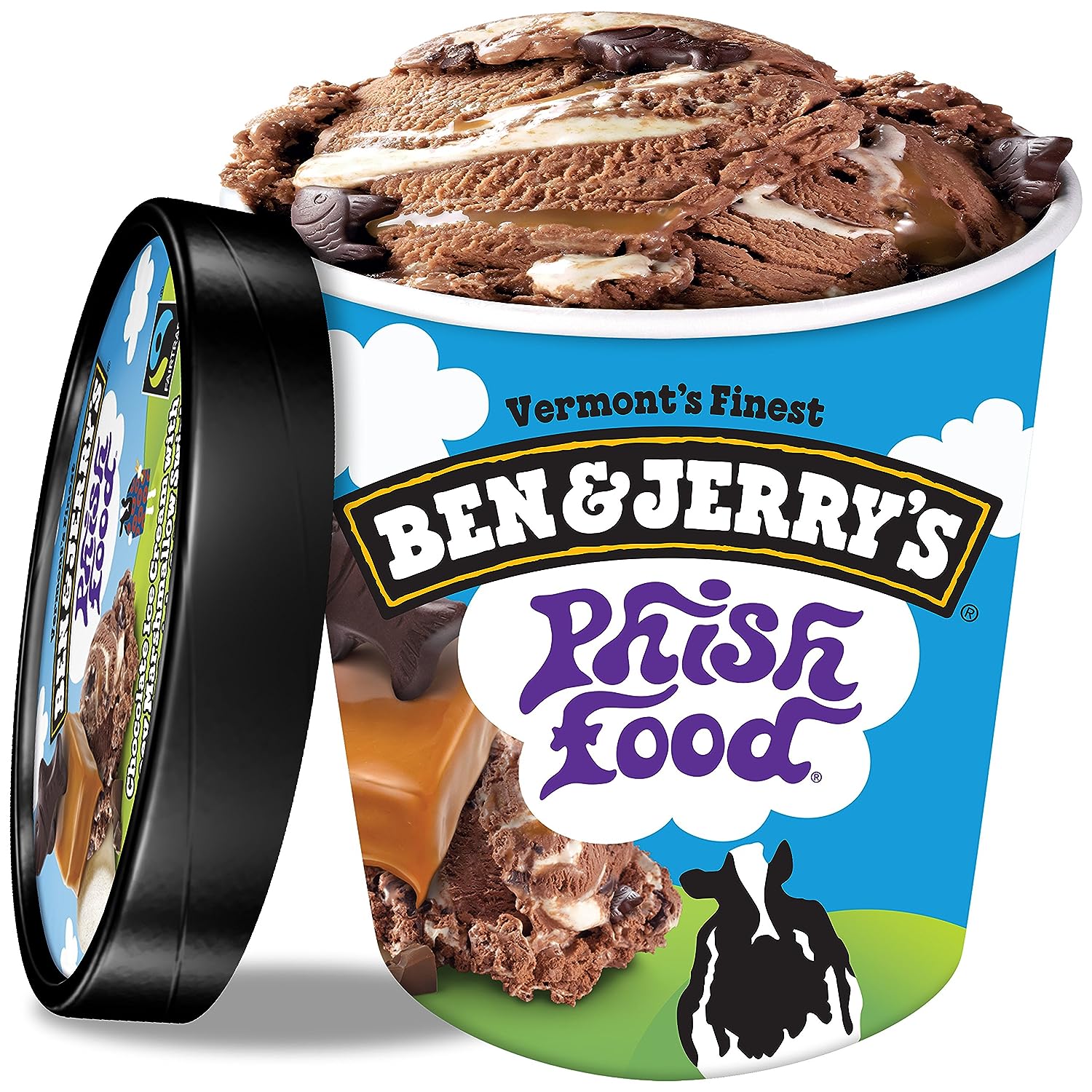 Steadily gaining popularity is Phish Food, a pint of chocolate ice cream with marshmallow swirls, caramel swirls and fish-shaped fudge. Currently occupying the No. 6 position on Ben & Jerry’s best-selling flavors, Phish Food is a favorite of Redditors as well, with one describing the “mixture of caramel and marshmallow” as “utterly divine and go so well together without being excessivly sweet.”

Phish Food has a 4.8 rating with more than 1,000 reviews on Influenster. 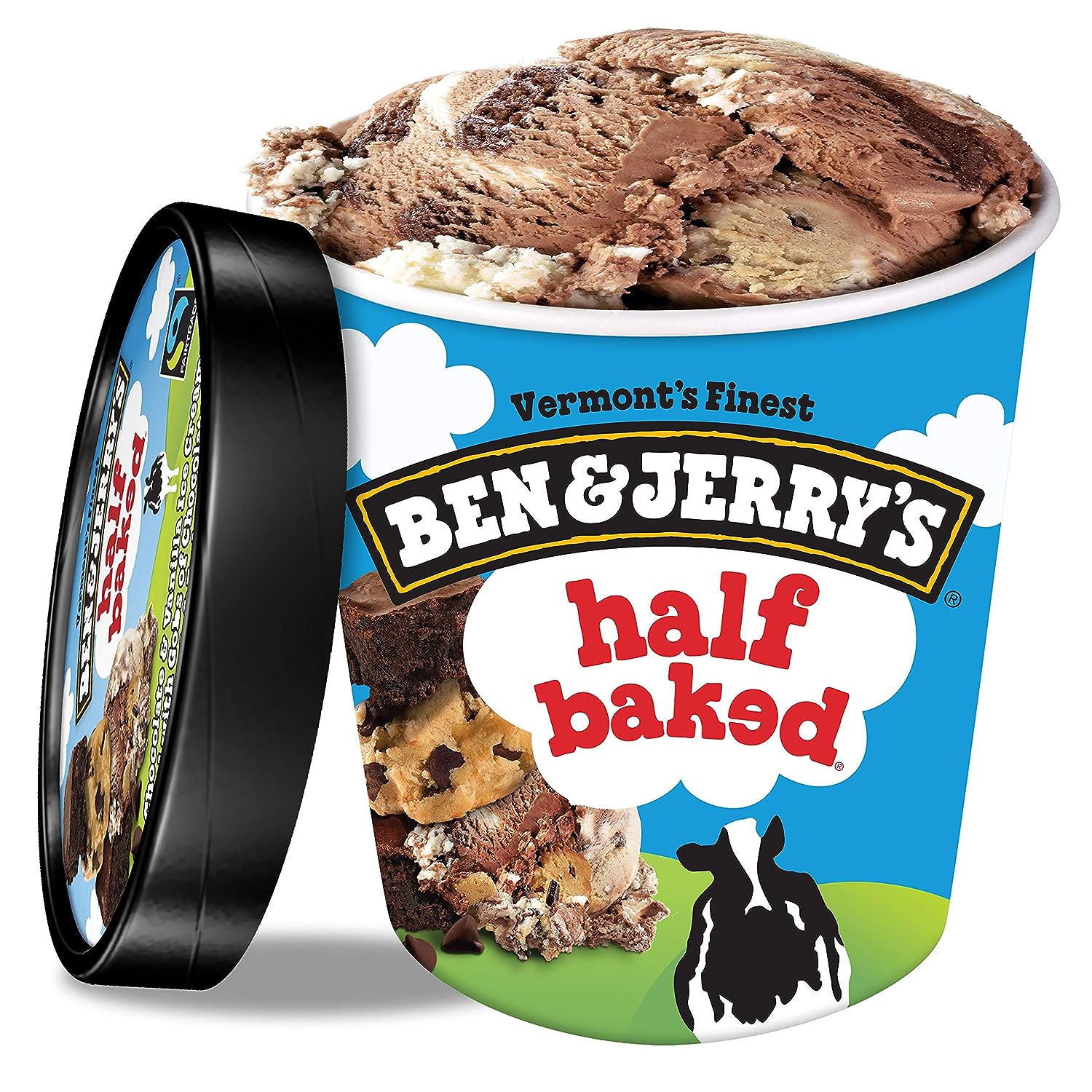 It’s the No. 1-selling flavor for a reason.

With over 1,500 reviews and a near-perfect rating (4.9) on Influenster, this pint of chocolate and vanilla ice cream mixed with gobs of chocolate chip cookie dough and fudge brownies is Ben & Jerry’s crown jewel — and we can’t get enough of it.

Before you go, check out some of the craziest ice cream flavors that actually exist.

A version of this article was originally published May 2019.