Big news, ’80s and ’90s babes: fruit-shaped Trix (aka the best Trix) is making a comeback — and my inner 8-year-old can’t stop screaming.

According to a press release, Trix Fruity Shapes is slated to make its return later this year thanks to consumer demand. “After receiving thousands of social media comments, mentions and requests for the return of the iconic cereal shape, Trix is officially announcing the return of the 90’s favorite.” 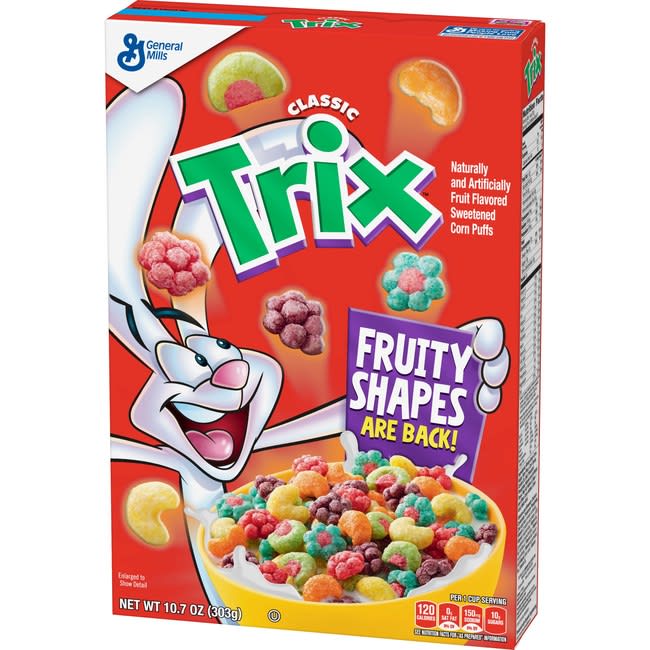 “Trix cereal is beloved by our fans, and we heard loud and clear that they wanted to see the iconic shapes back in their bowls,” Scott Baldwin, director of marketing for General Mills cereal, said in the release. “We’re excited to continue that legacy, bringing an extra dose of joy to breakfast.”

When Trix was initially released in 1954, it consisted of only three flavors: orange, lemon and raspberry. And while various flavors were introduced throughout the years, any Trix fan will tell you the biggest change to the breakfast cereal took place in 1991, when the company introduced the aforementioned shapes.

Of course, fruit-shaped Trix don’t taste any different from their round counterparts, but try to convince any child of that. Seriously, try. Because in their mind — and my little mind — the berries burst a little more when they took on the new bunched form, as did other classic flavors: like lemony yellow, orangey orange, grapity purple and wild berry blue.

So get stoked, friends, because Trix Fruity Shapes should be appearing on store shelves sometime this fall.