Ree Drummond is a food writer, blogger, photographer and TV personality best known for her hit Food Network show, The Pioneer Woman. However, Drummond — who makes some of the network’s best home-cooked comfort food — may soon be known for something else: her new Instant Pots.

Drummond already has a home goods line at Walmart, one dominated by bold colors and floral prints, but the two new pots will be her first such appliances.

Drummond told People that, initially, she was suspicious of Instant Pots, which are essentially modern-day pressure cookers, and remained skeptical for quite awhile.

“I was a little bit resistant to jump into the Instant Pot world for a while because it was just another piece of kitchen equipment that I didn’t think was necessary,” Drummond said. “Then my good friend Hyacinth, who is on my show with me a lot, gave me an Instant Pot for my birthday last January. I think she realized that she was going to have to force it upon me. Of course once it kind of clicked and I saw what this machine was capable of. I was totally hooked.”

She even dished on why the Instant Pot converted her. “It usually takes three to four hours to make my pot roast recipe if you make it on the stove top or in the oven,” Drummond said. “And in the Instant Pot, it took an hour and 20 minutes. I’ve always proudly said you can’t rush pot roast, but actually, in a pressure cooker you can rush pot roast and it doesn’t taste rushed, it actually comes out just perfectly tender and moist.”

But Drummond’s Instant Pots aren’t just practical, they are pretty. Covered in bold patterns, these appliances are meant to make a statement. 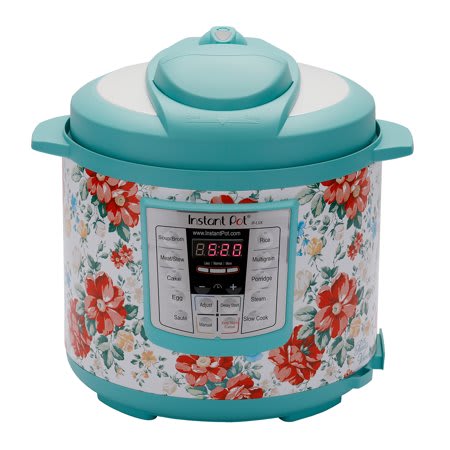 The pots retail for $99 and will come with a booklet of Drummond’s favorite recipes, including hard boiled eggs, spicy Dr Pepper pork and chocolate lava cakes. They are available for preorder now at Walmart.