I love hot dogs. I don’t care if they’re full of snouts and anuses. Hell, they could be all anuses — I’d eat them voraciously like Trick Daddy on his birthday. Hot dogs were nose-to-tail dining before it was cool. We eat more hot dogs in New York than any other place in America does — they’re as much a staple of our diet as pizza and bagels are. When I was growing up in the old version of Brooklyn, there were only a few truly acceptable ways to eat a hot dog: mustard, mustard and sauerkraut or mustard and onions. No ketchup. Ketchup is an abomination that can stay with French fries, where it belongs.

As I entered adulthood, the new version of Brooklyn emerged, and suddenly I was greeted by a multitude of new and exciting hot dog options. Immigrant communities aren’t as scared of trotting out their national versions, not fearing that they could possibly face a 20-minute lecture from a stranger on the virtues of Gulden’s Spicy Brown. Hot dog bars began to pop up featuring dozens of regional American variations. Marijuana possession laws have been relaxed, and people are starting to put Cheetos on everything.

While my favorite is still a Nathan’s Famous with brown mustard and sauerkraut, my eyes — and stomach — are now open to dozens of varieties. Here are my favorite American regional specialties, ones I’ve tried so far.

These are not from New York; they are a specialty of Rhode Island. I don’t know what “system” they are referring to. Subway? Digestive? Regardless, they’re good topped with a chili-esque meat sauce, onions, mustard and a touch of celery salt and served in a side-split steamed bun. I’ve been told that the fact that it’s a side-split bun is important. I don’t understand what the big deal is — cut bread is cut bread — but if you say so, Rhode Island. 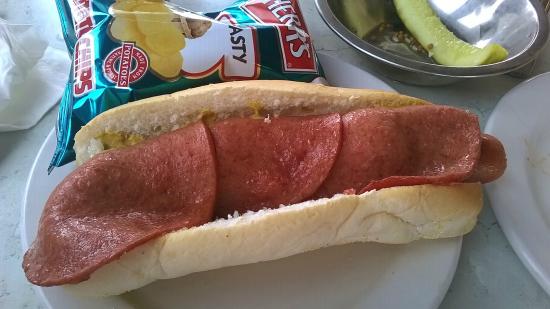 A fried hot dog, wrapped in fried bologna, slathered with mustard on a soft, squishy bun. I will take this over a bacon-wrapped hot dog any single day of the week. Bologna is just a gigantic hot dog all sliced up, so this is really a hot dog wrapped in a hot dog cloak. It’s the Buffalo Bill of frankfurters. The fried bologna component segues nicely into our next variation…

Famously “dragged through the garden,” Chicago dogs have way too much stuff on them: raw onion, pickled sport peppers, tomato slices, sweet relish, whole pickle spear, yellow mustard and celery salt. See? That’s just insanity. I also can’t eat them without making a huge mess, likely because they are served on a specialty roll that’s not available where I live. But I’ve found a solution!

As I mentioned above, bologna = gigantic hot dog sliced up. If you get it sliced super thick, you can grill it and make hot dog burgers (this is a major discovery for people such as me, who are in the “Burnt Is Better” camp). You can also engineer an excellent Chicago-style “hot dog burger” on a hefty poppy seed kaiser roll, with double patties and proportionate toppings. Also, you can now easily wrap a Chicago dog in foil and keep it in your purse for emergencies.

More: Junk food confessions: Can we talk about why Taco Bell is the best?

Again, way too much stuff on a hot dog. The dog is bacon-wrapped, grilled and topped with pinto beans, grilled onions, tomatoes, tomatillo salsa, mustard, mayonnaise, relish and heaps of shredded cheese (give or take this and that). Obviously it’s served in a gigantic, heavy roll, because no average bun can handle this, and even then you will get it all over you. Eat them naked. Problem solved.

You don’t grab these from a cart or restaurant — you’ll find them in every Chinese bakery from San Francisco to New York City, and they are a masterpiece of cheap eats. A hot dog bun is like a gigantic pig in a blanket, but the boring biscuit dough is replaced by Asian milk bread. I’m still confounded as to how milk bread is not a major thing in the States, as it’s so delicious that it’s impossible to eat less than an entire loaf in one sitting. It’s also one of the easiest breads you can make at home, so go do that the second you’ve finished reading this, then come back and tell me in the comments how I was right. I don’t care if it’s the middle of July — this is important! Put on a bikini, and get into the kitchen!

Another thing lifted from New York, but I won’t complain. It’s our own fault that we were too dumb to think of this. It’s genius, and we need to accept the fact that we got gamed.

And on this one too. Goddamn it.

It’s a hot dog served in a baked potato. What did you think it was going to be? It’s even got sour cream and chives, for Chrissakes. Maybe this is how they serve all their food there. Then again, can you really blame them? I’m having a harder time thinking of things that I shouldn’t put in a baked potato.

Seattle tops its dogs with cream cheese, which is an acquired taste. I know, I thought it was impossible to create a situation where one would not welcome cream cheese, but then this happened. It took some time, but eventually I caught on to the brilliance of it. The cream cheese isn’t just for flavor; it acts as an adhesive. Smear it on both sides of the bun, and press on whatever you want, like crumbled potato chips or bacon bits. Then cradle your hot dog in there, and pour whatever toppings you’d like on top. Cream cheese is, by far, the most liberating addition to my hot dog repertoire. There are no barriers that can’t be broken, no foods that can’t be added! Doritos! French fried onions! Skittles!

Have a cool hot dog in your neck of the woods that I haven’t heard of yet? Leave it in the comments. I haven’t met many hot dogs I haven’t loved, and I look forward to eating yours.