But even though vegans have given up cheese, that doesn’t mean some of them don’t miss it. When I switched to a primarily vegan diet two years ago, my friends and family were shocked, mostly because I was notoriously obsessed with cheese. Back in the day, my sister always said she would marry cheese when she grew up, and for some reason my personal motto was “I like cheeeeeeeese.” So giving it up was a daunting prospect.

More: 10 Secret ingredients every new vegan should have in their pantry 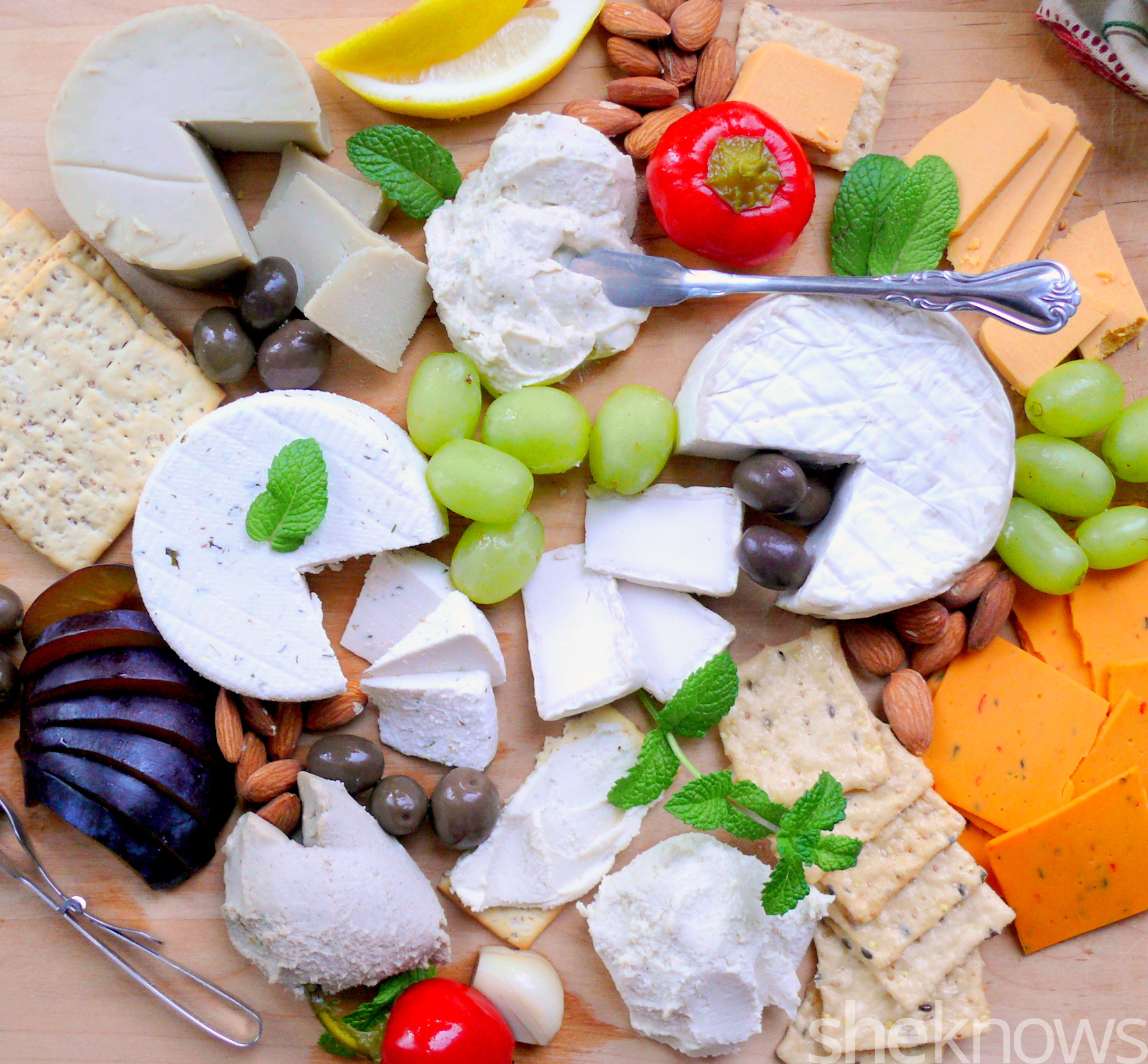 So maybe it’s because of my love for the taste of dairy cheese — and my dissatisfaction with its nutritional profile and the farming techniques that are used to procure it — that have helped me be more open-minded about vegan cheese. Yeah, vegan cheese. And while some vegan cheeses are made with mysterious combinations of tapioca starch, artificial flavors and colors, others are made from cultured nuts and nut milks using techniques very similar to traditional artisanal dairy cheeses. 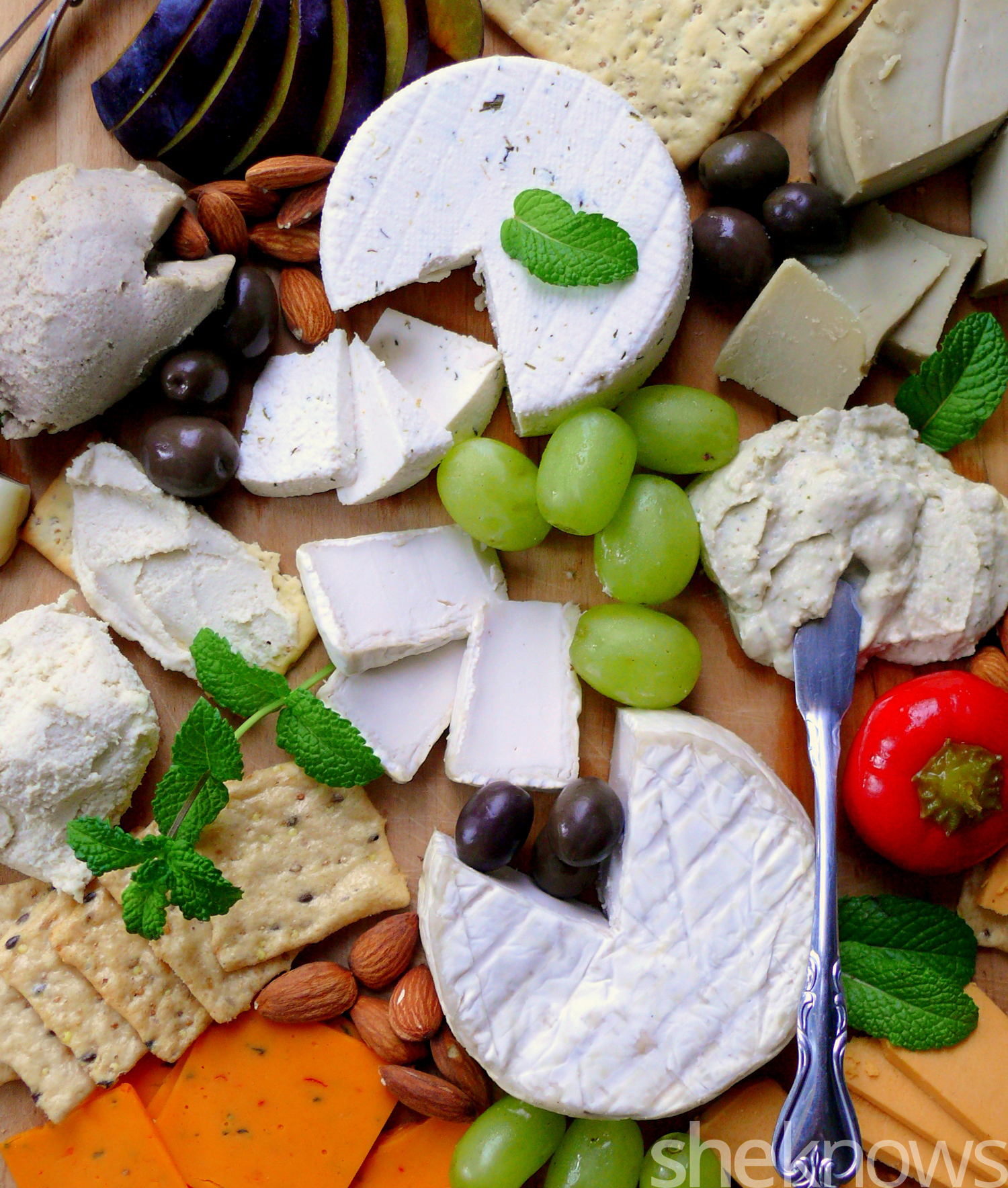 But how do they stack up? To find out, I bought eight different brands of vegan cheese and hosted a tasting for two of my omnivorous friends and one other vegan. While there were definitely some misses, there were a few options that wowed us all.

Here they are, ranked from our least favorite to our winner. 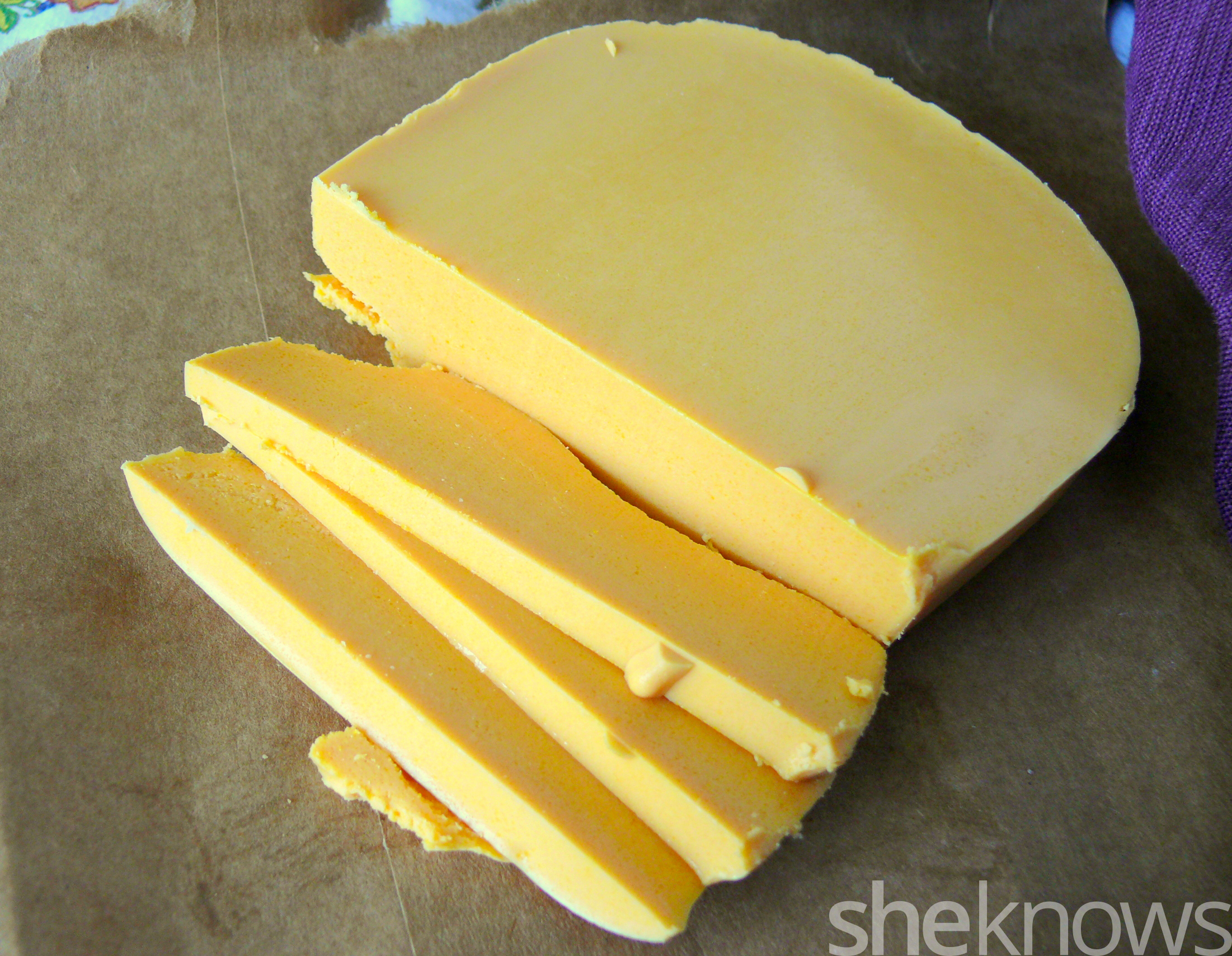 Daiya has made leaps and bounds when it comes to producing a meltable shredded mozzarella for pizza, but its Cheddar Style Block fell totally flat. This was the only one of the group I would never buy again. Tasting notes ranged from “the vegan equivalent of the worst-quality American processed cheese slices” to “I feel like my mouth is filled with quicksand.” It does, however, melt really well, so if you’re a vegan just craving a Velveeta-style mac and cheese or grilled cheese sandwich, then this is probably the cheese for you. On a cheese plate, though? Nah. 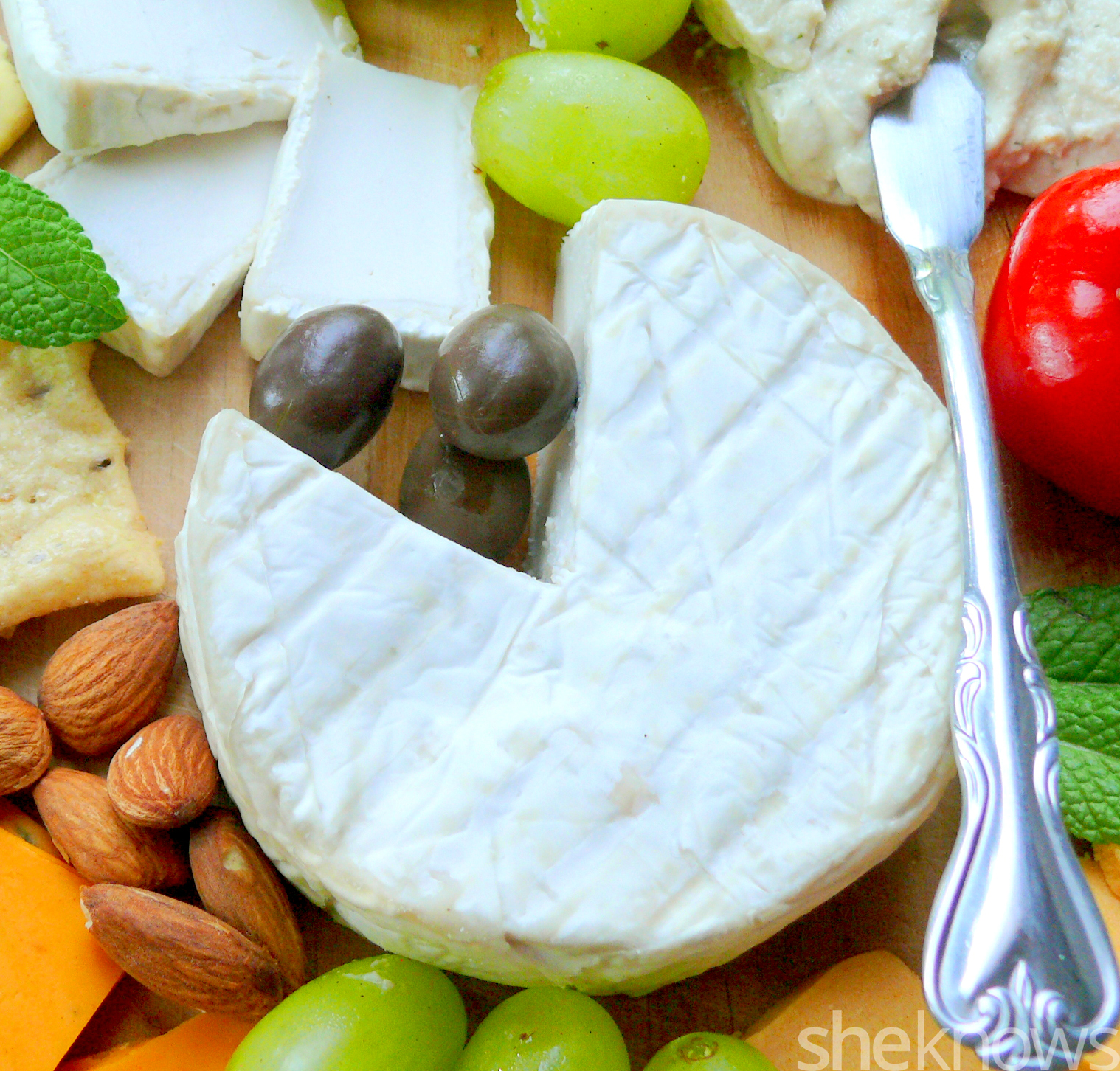 I wanted to love this cheese so badly. Brie is basically a gift from the gods, and if there were a vegan cheese that was able to replicate its luscious texture and buttery, slightly gamy flavor, I would be so happy. Unfortunately this was not the miracle replacement I was hoping for. This cheese from Kite Hill doesn’t get a lot wrong; it just failed to leave much of an impression. I liked that it’s made from only four ingredients: almond milk, salt, enzymes and cultures. It had a fluffy white rind that was nearly identical to that on a traditional Brie. But the texture was spongy, not creamy, and while the cheese was mild, it had a sort of strange aftertaste. I still have hope — the fact that a four-ingredient vegan cheese like this exists at all would have been inconceivable a few years ago, so as the company hones its technique, I’m sure it will only improve. 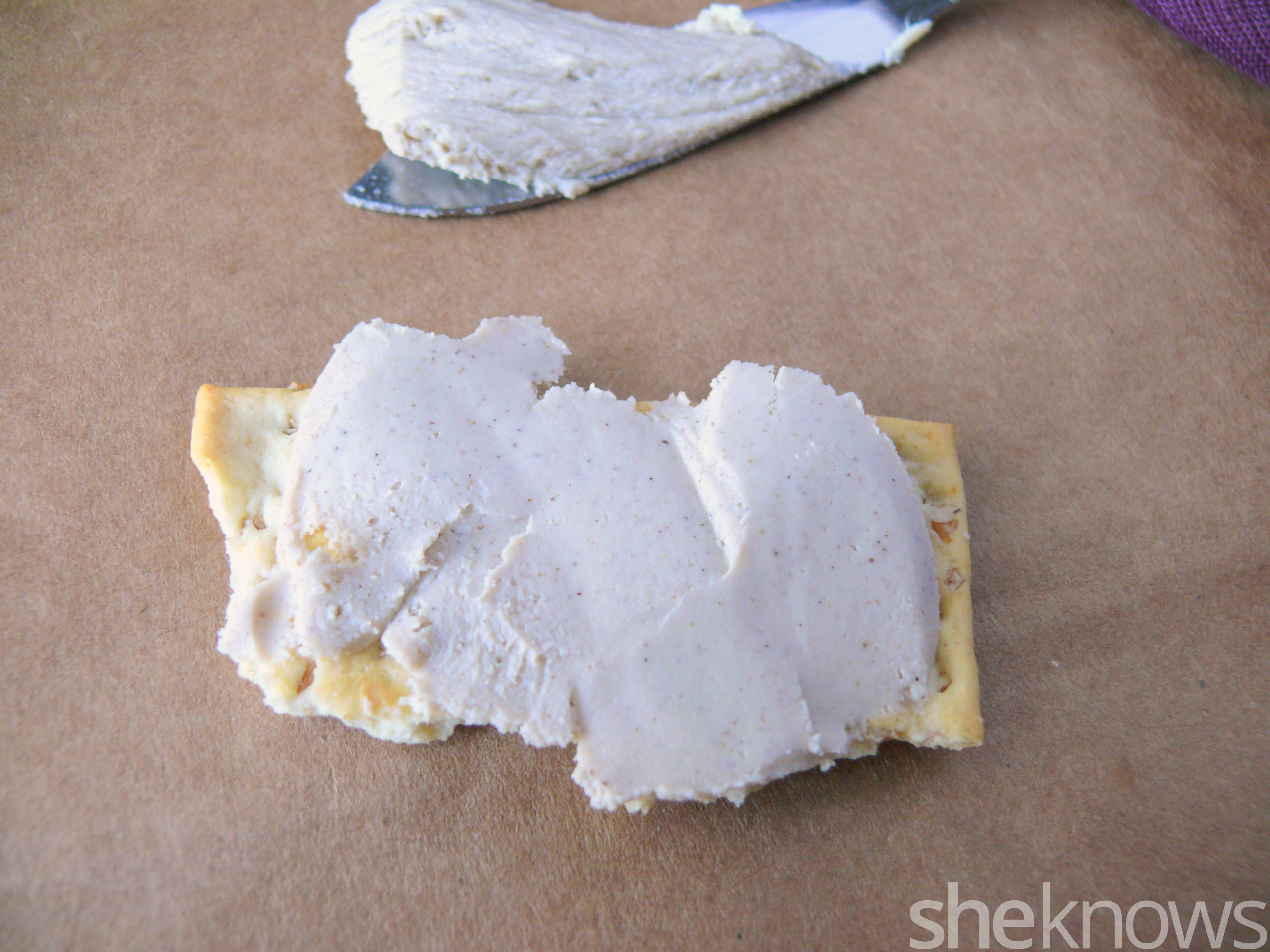 This super-peppery spread was a welcome addition to the cheese plate. But if you hate black pepper, you will detest this — it has a very strong flavor profile. It came as a thick spread, which was great on crackers and would likely be nice on a wrap or pita sandwich or even added in dollops to an arugula or spinach salad. It didn’t taste particulary cheesy, but nothing about it made it seem identifiably vegan either. I would get this again. 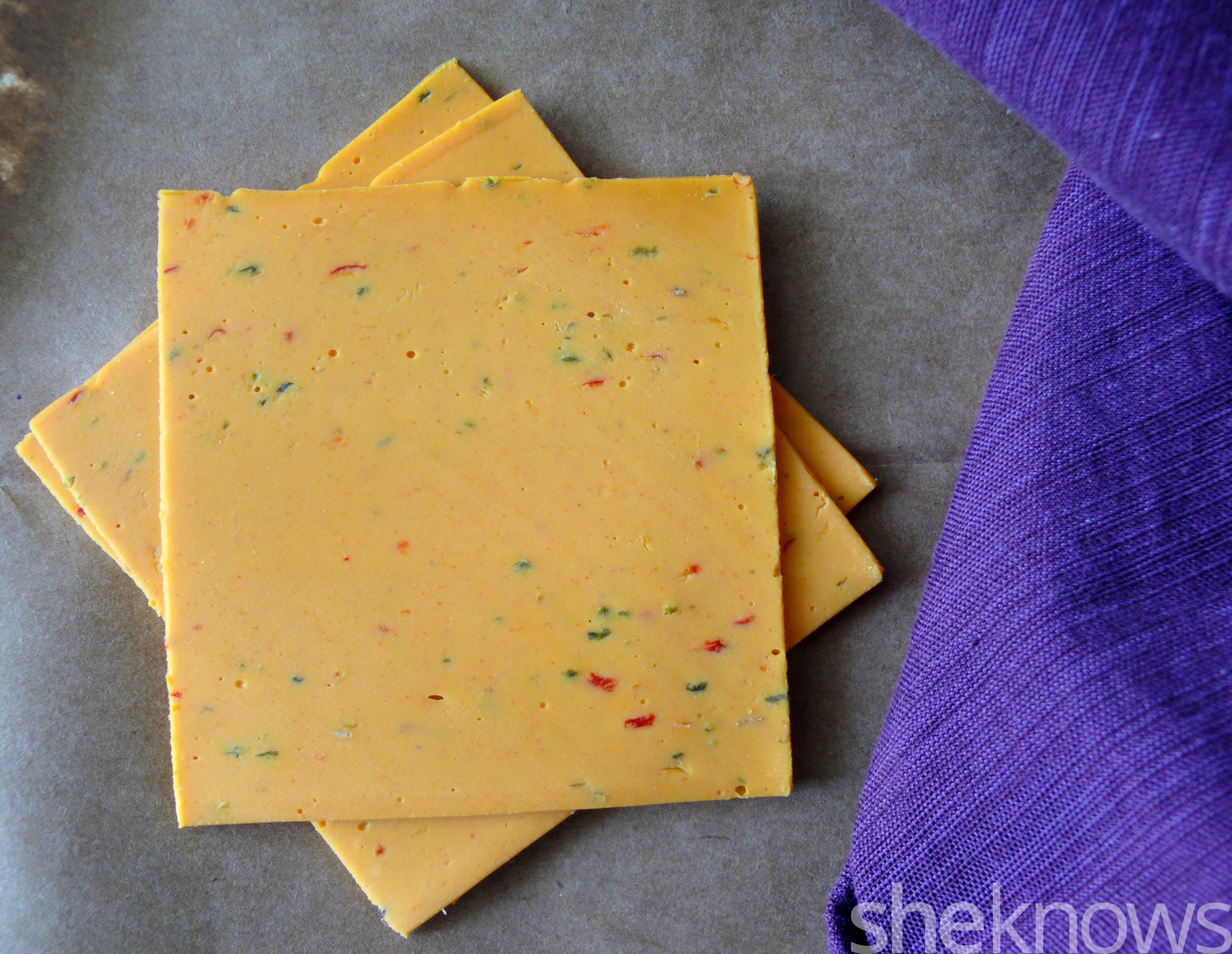 Chao slices are made from coconut and flavored with a Vietnamese fermented soybean curd that is also called chao. The tomato-cayenne flavor was relatively mild, slightly sweet and spicy. The texture was semidry, sort of like a Swiss cheese. It was really good on crackers, like the kind of cheese you might get in a store-bought cheese and crackers plate. On its own, it was just relatively flavorless, though spicy. It melted pretty well, not into a creamy puddle like the Daiya, but again, more like a Swiss cheese slice. Both omnivores at the tasting said it tasted like nondescript deli cheese and that if they ate it in a sandwich, they wouldn’t guess it was vegan. 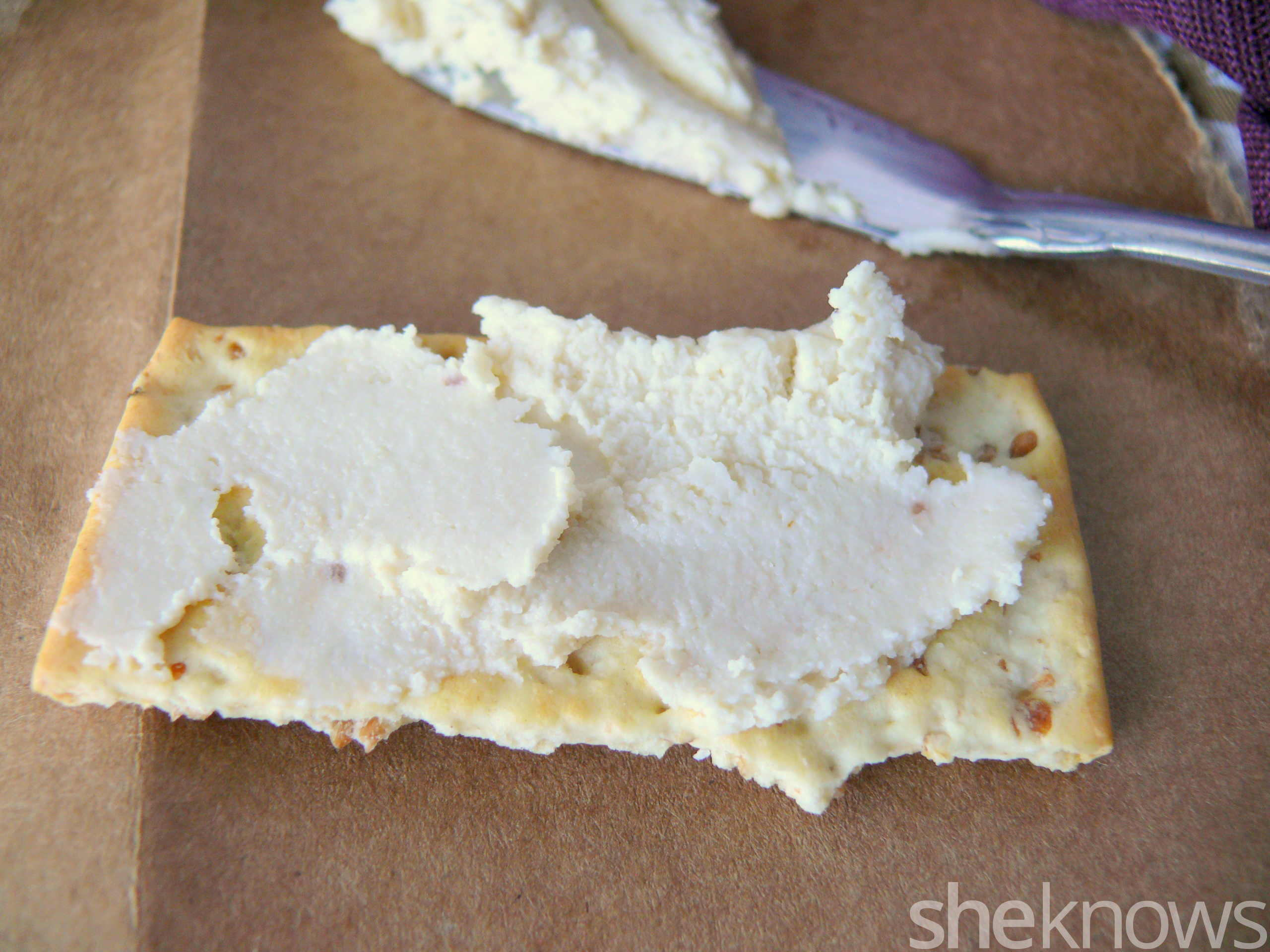 I was surprised by this one. This was the only cheese that contained nutritional yeast, which is used in tons of vegan mock cheese recipes. It has a very distinct flavor that I usually don’t like, so I was skeptical. But once I tried this cheese on crackers, I was hooked. It’s made with very basic ingredients — cashews, water, sea salt, lemon juice, live cultures, nutritional yeast and citric acid — and its texture is like a creamy, soft goat cheese. It has a bit of tang and a bit of nuttiness and was great on crackers. I didn’t like it as much on its own, but it worked really well spread onto crackers, and I think it would work well on sandwiches too. My fellow tasters also liked it. One said it would be great inside ravioli, and another said it had the same cooling, creamy effect as ricotta and thought it would be good dolloped onto a bowl of pasta. I will definitely get this one again. 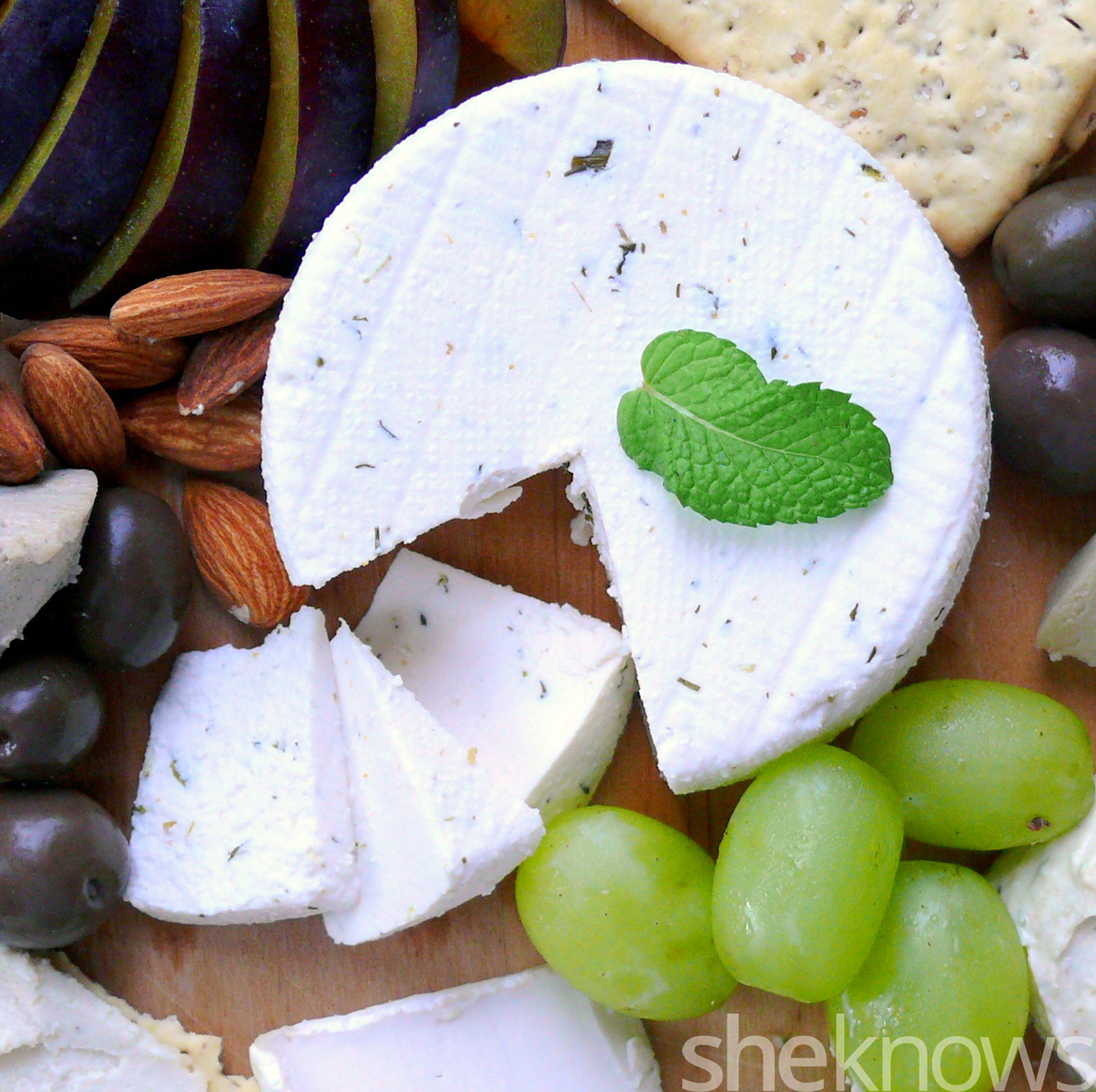 This soft, moist cheese is flavored with truffle, dill and chives, though the dill is really the only flavor that comes across. So if you hate dill, you might hate this cheese. It has a slightly grainy, crumbly texture but is spreadable. It was nicely herbaceous and really good with crackers. It would be great on crostini with roasted red bell peppers or cherry tomatoes or on mini rye toasts. This product is made from cultured almond milk and is flavored with the actual herbs in its name along with truffle oil. I think this is a delightful cheese alternative that vegans who miss dairy cheese will love, and the omnivores at our tasting dug it too. 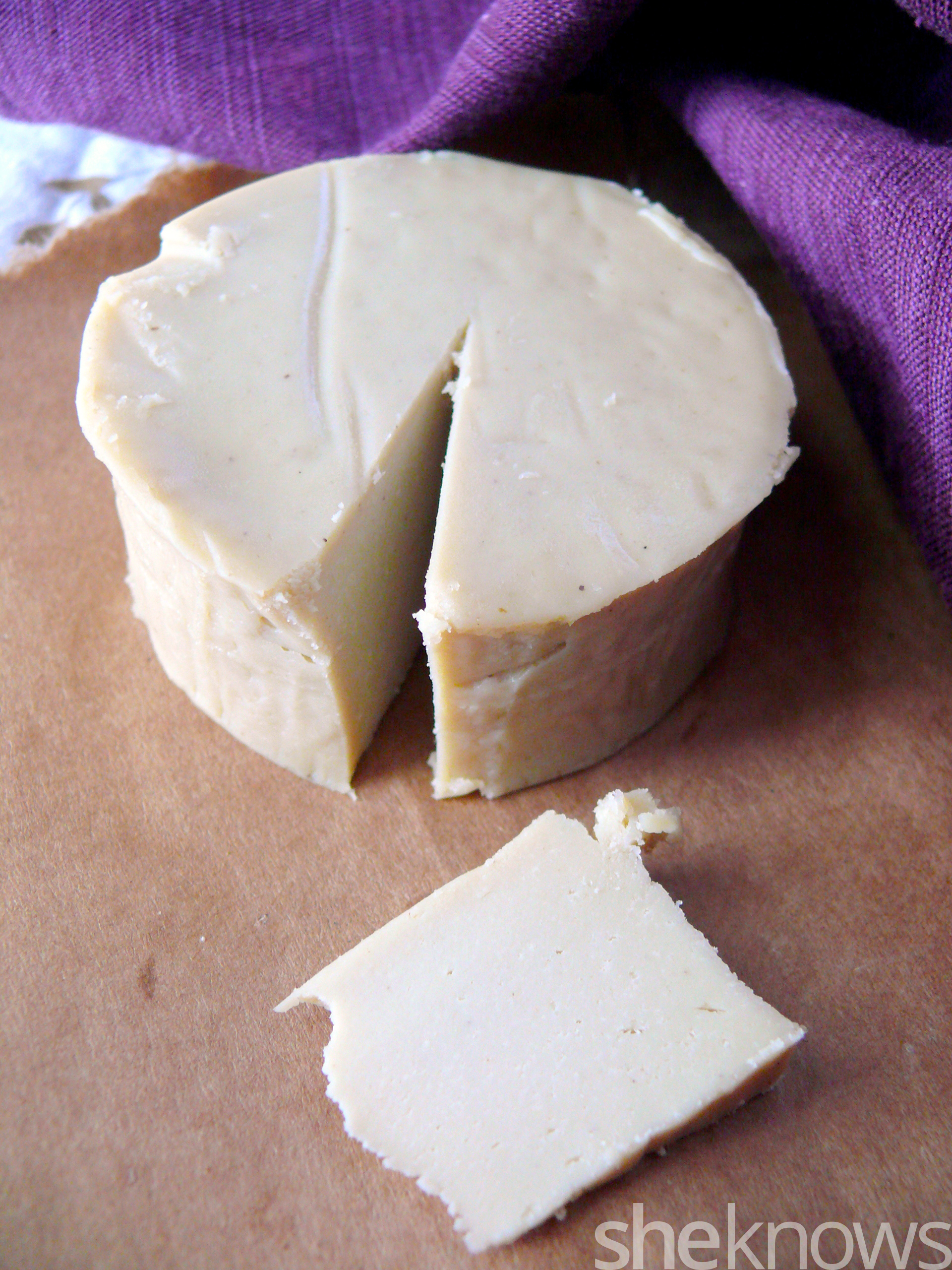 This cheese had a slightly mixed reception by our tasters, but overall it was the closest in texture to a traditional cheese. It has an unfortunate gray color that made everyone wary of tasting it at first. But once we did, it was clear this cheese was a winner. It’s got a bit of a sour bite to it, like a goat cheese, and its semi-firm texture is nearly indistinguishable from that of semi-firm dairy cheese. It has a lightly smoked flavor. Three of our tasters loved this one, citing its great texture and flavor. One of our tasters thought it was too sour. But overall, I would say this one was a definite hit, and I will definitely be purchasing it again. 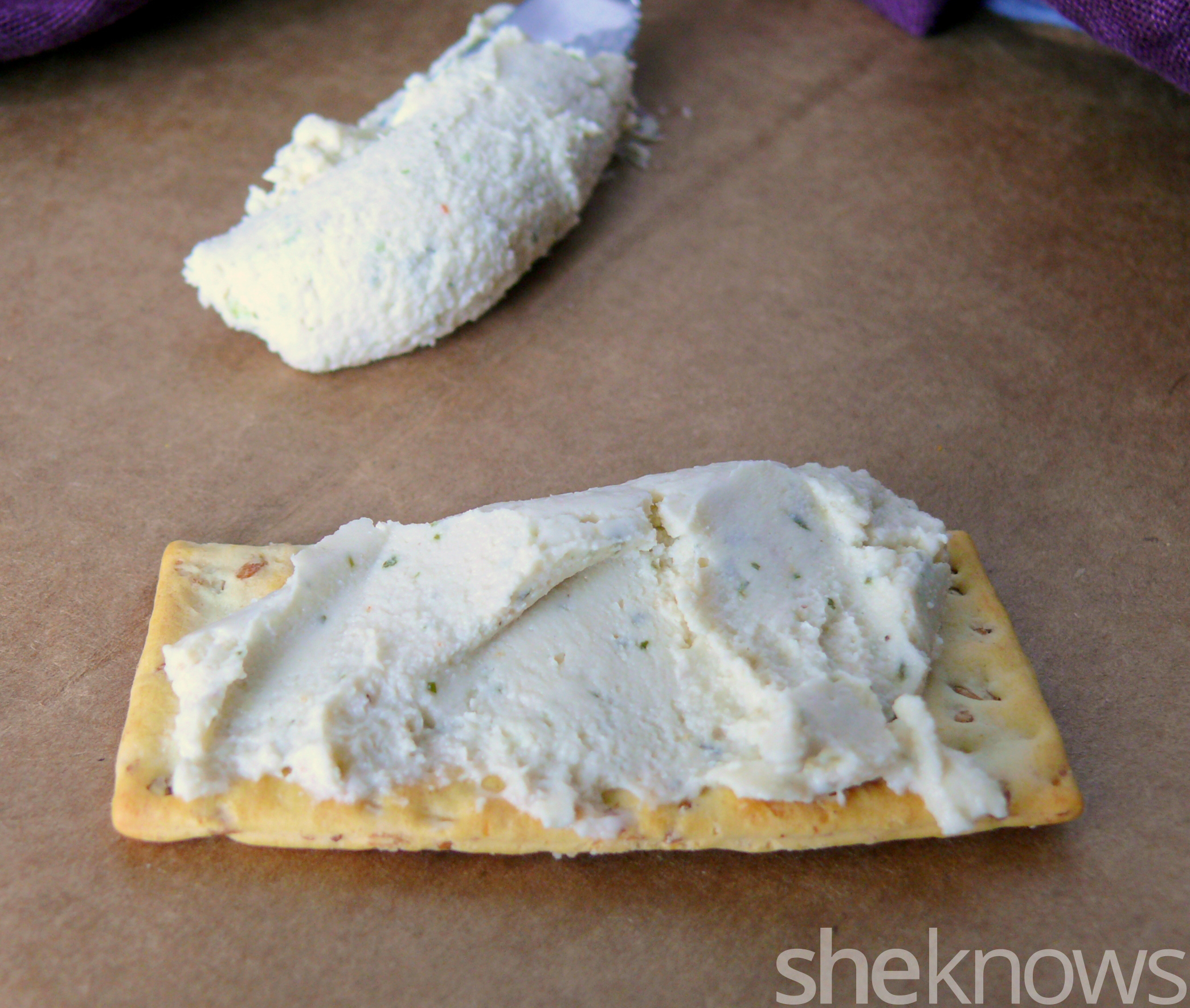 This cheese came out of nowhere and totally won the tasting. I was the most skeptical of this product. I mean, it’s called “probiotic cashew spread” right on the label — I assumed it was going to taste like the worst stereotype of vegan hippie food. But I was so, so wrong. This super-creamy spread was richly flavored with herbs and spices. It didn’t taste like pepper jack, as the name implied, but more like Boursin. One taster even likened it to French onion dip. Once we were done with the tasting, I had to get the rest of this one out of the fridge so we could keep snacking. I will definitely purchase this product again, and I’m excited to bring it to parties with crackers or potato chips and to watch my omnivore and vegan friends eat it up.

And I’m thrilled to know that tasty vegan cheese is now a reality.