I’ve been a Texan for most of my life, and there’s something kind of strange I’ve observed about living in the Lone Star State. The food culture in Texas is diverse — I mean, really diverse when you think about the fact that it takes you a good eight hours to drive out of Texas’ borders.

Texas is huge. Depending on where you land, you’re going to have dozens of delicious foods to choose from — like the legendary Tex-Mex in South Texas, succulent seafood along the Gulf and especially the finger-lickin’ barbecue in East Texas.

Now that I’ve got your attention, you may want to put on a bib. These famous Texas foods are guaranteed to make you drool:

But of course, barbecue would be at the top of this “Texas does it better” list. You’re bound to find good barbecue in almost any corner of the state. Texas Tourism recommends making a barbecue pit stop (see what I did there?) anytime you’re in the Austin area. Customers wait for hours for delicious homemade brisket at the renowned Franklin Barbecue in Austin. 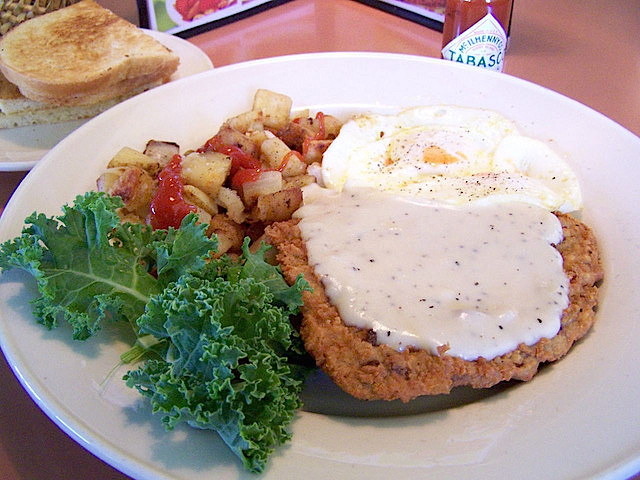 That friendly state where everyone tips their hat and says “y’all” is also the state where we like to eat chicken-fried steak the size of your face. Texas beef tastes better when you dress it up — by dipping it in some flour and tossing it into the deep fryer. Teri Gault, CEO of The Grocery Game and SoCal resident married to a Texan for 35 years, says chicken-fried steak is one of the fine Texas foods that even the healthiest Californians can’t resist. “This is something that you rarely get right anywhere in a restaurant outside of Texas or Oklahoma (which is where I’m from). I have the butcher put sirloin or round steak through the tenderizer twice, and it comes out just the way any self-respecting Texan likes it. I ‘chicken fry’ it the Texan way.”

You may want to loosen your Texas-shaped belt buckle for this. Like any authentic Southern state, Texas is known for its fried food. I haven’t been to a state or county fair where you can’t get fried pickles, fried Oreos or fried butter (preferably on a stick). “The State Fair of Texas is known for being the mecca of fried foods every year at the annual event. Fried butter, fried gulf shrimp boil, chicken fried bacon… This event has it all, and each year the fried foods get even more interesting and adventurous,” says Leslie Chatman, the voice behind the Dallas-based lifestyle blog Pop Goes the City. 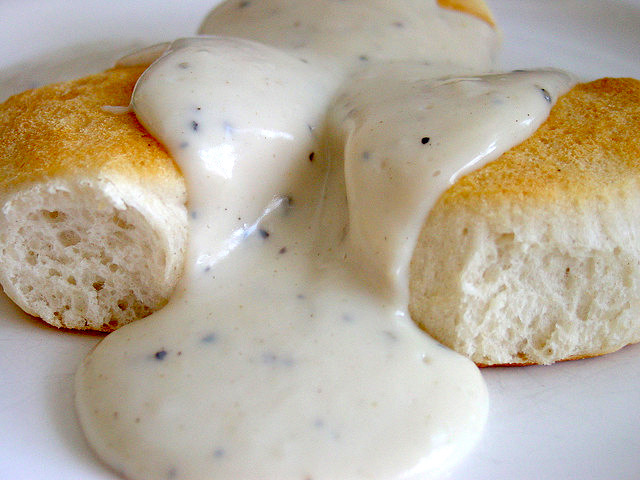 In the Republic of Texas, gravy is a food group (God bless this wonderful state). One of my favorite dishes of all time is Texas’ homestyle biscuits and gravy, which you can find at any roadside diner or Jim’s Restaurant in the Great State. As Gault points out, when you make milk gravy the “right” way (aka the Texas way), there’s going to be lard involved — and lots of it. She explains, “I can’t tell you how many California foodies, who otherwise eat healthy, beg to come over for one of our breakfasts on Saturdays. This is [gravy] made from the ‘drippings.’ Technique is like making a roux, but you have to be careful about how much fat you keep in the pan before adding flour. Not too much, and certainly not too little. Why? Because it’s a lost art, and it’s fattening!”

There are two things you need to know about this cheesy goodness you can find anywhere in Texas: It tastes better after bar close, when you need something to soak up the alcohol in your belly, and it goes on anything. (I mean anything.) Megan Renart, writer and Austinite, confesses, “When I first moved to Austin, I had a serious problem with queso. I ate it all the time. I could almost eat it like soup in a bowl. It’s just done a certain way here and can’t be replicated.”

Try to go to Texas without eating chips and salsa — I dare you. You’ll quickly find out it’s simply not possible to visit Tejas without enjoying the unofficial state food. The fun thing about Texas is that no two salsas are alike. The fresh salsa you get at a taco cart will be amazingly delicious and totally different from the homemade Texas salsa sold on H-E-B shelves (Texans’ favorite grocery chain). If you want to take a souvenir home with you, jarred salsa makes a great gift: Mrs. Renfro’s spicy salsa is a guaranteed grocery store win, made by a 75-year-old family business in Fort Worth. 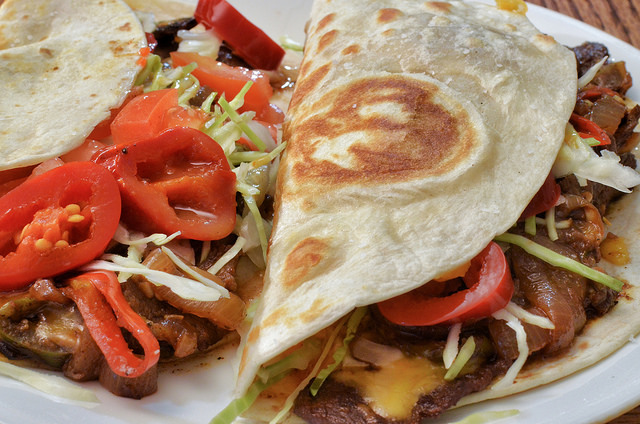 As you venture closer to the southern border, there are only two words you need to know: Tex and Mex. Ask any local where to find some good Tex-Mex, and you won’t be disappointed. Stephanie Merchant, Texan and founder of The Nutrition Mom, lists her top two Texas favorites as barbecue and Tex-Mex, saying, “We are known for our Tex-Mex, Mexican food with a Texan flair.” If you don’t know where to start to get your taco on, Texas Tourism recommends trying Frida’s in McAllen, ranked by TripAdvisor as the No. 1 of 100 South Texas restaurants since March 2013.

Pizza may not be the first thing that comes to mind when you think of Texas, but in typical Texan fashion, the natives have gone and made it their own. Austin is already famous for unbelievable barbecue and Tex-Mex, but as soon as you visit the hip and happening city (which also happens to be the live music capital of the world), you’ll stumble upon an emerging pizza scene. Home Slice Pizza is one pizza joint in Austin that has gathered a cult following — even Rachael Ray has dubbed the neighborhood pizza place a “big rite of passage” when visiting Austin.

Belly up to any Texas bar (especially a college bar in Austin), and you’re going to get a dirty look if you order anything other than the state’s finest vodka. I can confirm that Austin’s Deep Eddy Vodka goes down smooth — a little too smooth if you’re trying to call it an early night. Deep Eddy is made in its own distillery in small batches outside of Austin and boasts being the fastest growing vodka in the U.S.

I have to admit I laughed when I first heard that the Texas Wine Trail in Fredericksburg was considered the new Napa (we Texans getting too big for our britches again!). But then I took a little tour down Wine Road 290 and had to drink my words as I sampled some of most flavorful wines the country has to offer. According to Texas Tourism, “Texas is the fifth largest wine-producing state in the U.S., home to 15 native grape varieties and houses more than 275 bonded wineries. Those looking to take a tour of the Hill Country wineries will enjoy Wine Road 290, which encompasses 13 award-winning wineries along U.S. Highway 290.”