The 4th of July makes everyone go into red, white and blue overdrive. But even if you’re cranking out the flag cakes and sipping on patriotic-themed cocktails, you’ve got nothing on Charles Phoenix.

See, Charles took pie, which is inherently American, and then stuffed it into red, white and blue cakes, and then stuck them all together. But he wasn’t done there. Then, he added flags, sparklers and Pop Rocks atop his masterpiece. 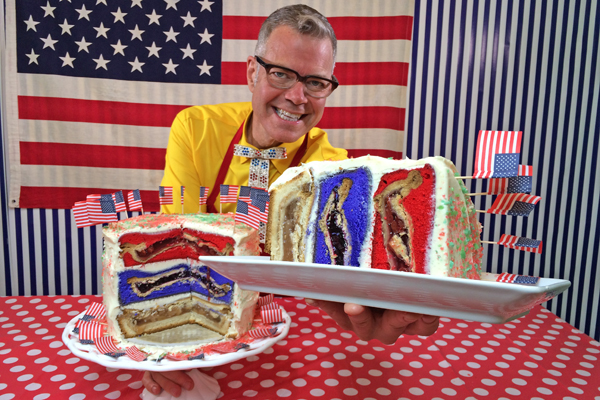 His creation is called The Cherbluble, because it’s a mashup of cherry, blueberry and apple pies, of course. And the best thing about it is you don’t have to be a master baker to accomplish it. With the help of Sara Lee, your Cherbluble is already half done. Throw in some boxed cake mix and canned frosting, and you’re diving into the most American pie-cake you’ll ever eat.

19 Patriotic desserts to add a sweet spark to your 4th of July
17 Cocktails to celebrate the 4th with red, white and booze
The flag cake that will make you seriously question your baking skills

11 hrs ago
by Kelsey Mulvey