Walking into a Starbucks can be a daunting experience, especially when all you want is a cool treat. Here’s what to order and why.

I have a confession to make: Before writing this article, I never had a Starbucks Frappuccino in any meaningful way. I mean, sure, I’ve taken a sip off a friend’s as a chaser for bad vodka or to take a dose of enormous antibiotics, but I had never ordered a Frappuccino for the sole purpose of drinking it.

Not that I don’t get to Starbucks a lot. I do. I practically live there, and there’s a room in the back just for me, with an intravenous station so I can feed espresso straight into my neck.

But with all the Frappuccino news of late, I decided to take the plunge and finally order a frosty coffee drink of my own to see what all the fuss is about. I just didn’t know which one to get. Surely, I thought, there must be others like me who have never had one either. Where’s the beginner’s guide to Frappuccinos?

In fact, I had two fellow novices in my home with me: my husband, Marc, and my best friend, Liz. So an idea was born — let’s go to Starbucks, order all the Frappuccinos and rank them in order of least favorite to most favorite.

Here’s some actual footage of us deciding to do this:

Here are a few things I have to note: We only ordered the Frappuccinos on the current menu, because I figured that Blended Cremes, the non-caffeinated offerings, didn’t count. Then my husband insisted we get the Oprah Chai Tea Latte Blended Creme, because Oprah.

Then, when we got home, we realized we forgot the Caramel Ribbon Crunch, so that’s missing, but here are the rest, in ascending order:

This was by far everyone’s least favorite drink. It was extremely sweet and left a really weird aftertaste in everyone’s mouth. My husband said it was “exactly what I imagine drinking straight half-and-half would taste like,” while Liz noted that it was “creamy, but in, like, the worst possible way.”

This was actually my favorite and great if you don’t like sweet things, like me. I was completely outnumbered, though, so it’s near the bottom of the list. It suffers from the opposite problem of the White Chocolate Mocha; instead of being too sweet, it is kind of bitter. Great if you love espresso, but less great if you’re just looking for a treat.

Vanilla is so low on the list because there was a sort of non-taste to it. In fact, at this point, we all had drunk enough Frappuccinos to start seriously regretting our life choices, so no one was really hyped about it. Liz, our resident non-coffee drinker, just shuddered when she took a sip, and my husband noted that all the Frappuccinos were starting to taste the same and that Starbucks might just be playing a huge joke on America.

Java Chip starts out tasting really good. It’s all chocolaty and delicious, and then suddenly all these little bits get stuck in your straw, and, as my husband noted, “There’s something kind of unsettling about having to chew your dairy beverage.” At this point, we also began to wonder what the whipped toppings were about. They don’t taste very good mixed into the beverage, and your only other option is to navigate little glops of it through the hole in the dome lid, balanced on the end of your straw.

Now we’re starting to get somewhere — this is where the list begins to turn. We all liked the regular Mocha, mostly because there weren’t any gimmicks or anything — just coffee and chocolate, like the good Lord intended.

This one was the dark horse. Yes, it’s technically not a Frappuccino, and I wasn’t a huge fan, but I was outnumbered again. It is pretty sweet, but in a less oppressive way than the White Mocha was.

Caramel was another across-the-board favorite, but again, it was pretty sweet for everyone’s taste. It would be better with maybe one-quarter of the caramel flavor, and luckily for us, that’s something Starbucks can do; they claim there are over 30,000 ways to personalize a Frappuccino.

Personally I think this is your best bet if you’ve never had a Frappuccino before. If you regularly drink coffee, then there aren’t any weird surprises here, and it tastes like what the name implies it will — coffee blended with ice.

Surprisingly, S’mores came out on top. Even though everyone had disliked any overly sweet drink, my husband said, “It’s unapologetically s’mores-y. You know what you’re getting into.” Liz, on the other hand, liked the graham crackers and decided it was the only coffee-based drink she could see herself trying again.

So there you have it! The takeaway is that if you’re new to the Frappuccino game and really like coffee, stick to simple flavors. If you don’t like coffee, go for the wackier stuff or the Blended Cremes, and if you have any self-respect, stay away from the White Chocolate Mocha.

At the end of all this, we all agreed on one thing: Whatever you do, never order nine Frappuccinos and then drink them one by one. That is a terrible, terrible mistake, and you will spend the subsequent three hours after the fact moaning a lot and trying really hard to not move so you don’t accidentally burp. 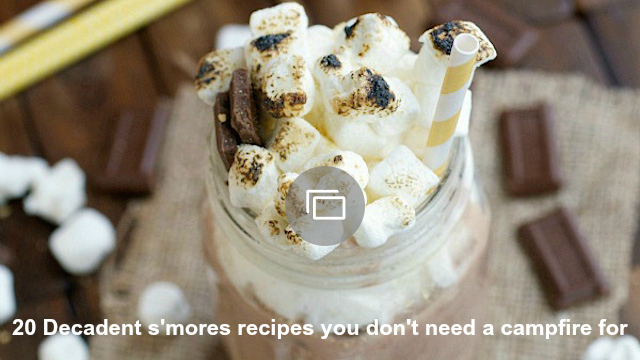 7 hrs ago
by Jennifer Tzeses