When you think of Disney World, you may think it’s a great place for those who love lines, pageantry and magic. However, Disney World is also a great tourist destination for the gourmand, with a surprising array of places to have a great meal. Some of these places get a lot of press, but others are hidden away, just waiting for a palate like yours.

OK, it’s true. Many of the stories you’ve heard mixing food and Disney World tend to end with small children having upset stomachs and some nasty results. That’s kind of unfortunate, because Disney World is a magical place that caters to the young, the young at heart and all peoples in between. That includes those who love to go on vacation and eat.

There are literally hundreds of places to get a bite in Disney World, so there are probably dozens you’ve never heard of. That’s OK, we’ll be your guide to the Disney eats you’re missing but shouldn’t be.

1. Flatbread with spreads at Sanaa

Sanaa is Walt Disney World’s African-themed restaurant, featured prominent at the African villages resort. With windows that look out onto a large nature reserve, diners are treated to a number of African dishes, including curries, salads, drinks and the best flatbread you’ll ever eat. Basically a 2-foot-long piece of naan, Sanaa’s flatbreads come in different flavors, like plain, coconut or spicy, and can come with three or nine different spreads, like tamarind, spicy chili sauce and coconut. You can order the flatbread as an appetizer, but it’s more than enough to make a meal. For three people.

If you’re not overloaded on carbs from the flatbreads, Sanaa has the best dessert in all of Walt Disney World: the Savanna S’mores. These s’mores, which are really just pudding, graham crackers and whipped cream, bring the flavor of a wild campfire and are so much more than the sum of their parts.

Epcot is a tale of two different parks. The first part, with its trademark geodesic dome, focuses on technology and science. The second part is an homage to the peoples of the world. In the science and technology area, you’ll find Club Cool, a Coca Cola-sponsored soda bar that offers free samples of drinks from all around the world. Try them all, but come back for as many shots of guarana (a fruity Brazilian drink) as you can fit into your little sample cup.

Once you get out of the science and technology area, take a right turn, and you’ll soon find yourself in Merry Olde England, or at least a reasonable facsimile of it. Feel free to stop in and get some authentic English tea, and then grab some fish and chips. They’re greasy, salty, and they smell like the best food you’ll ever have in your life.

By the time you’ve finished your fish and chips, you will have walked through several more areas of the (Epcot) world, and you should be entering Japan. There, you can devour mochi balls and a two-bite sushi combo that’s covered in sweet eel sauce that makes all the walking you’ve done more than worth it.

Did we mention the world is a big place? Did we also mention that Epcot is a big place too? It’s OK, though, because the good folks at Epcot will make sure you can keep your strength up by offering an array of German sausages in their German area. Tossed on a bun and slathered in mustard, these sausages are the next best thing to traveling to Munich and feasting on meat in your lederhosen.

Disney’s Animal Kingdom park is awe-inspiring with its homage to The Lion King‘s home, zoo and the yeti ride. Of course, after all of that exploring, you’re sure to work up an appetite. That’s why we recommend the Yak & Yeti. The food is simple Chinese fare, but the smells alone are worth it. Plus, you can sip on a Yak Attack, a delicious mango daiquiri with wild berry flavors.

8. All the pork at Whispering Canyon

Whispering Canyon is the place where food goes to have fun. It’s a barbecue restaurant in the Fort Wilderness Lodge that features all-you-can-eat barbecue, stick “horse races” and lots of ketchup, if only you ask… Anyway, there’s some good ‘cue at Whispering Canyon, but really, it’s the “eat pork products until the waitress’s legs fall off” platter that really sells the meal.

The Hollywood Brown Derby is an exact replica of the famous Brown Derby in Los Angeles. Taken straight from a movie scene, it’s got old-school charm, white tile floors and famous people’s pictures on the wall. It’s also got the best darn Cobb salad you’re likely to ever have. One might say it’s legendary.

Nestled at the bottom (the very, very bottom) of Disney’s Contemporary Resort is a half sci-fi/half underwater restaurant known as the The Wave… of American Flavors. The restaurant, though given an unwieldy name, features fantastic eats, including the lump crab Florida rock shrimp cakes, which is also an unwieldy name. Still, no matter how you order them, you will love them, since they’re the type of seafood cake that’s all seafood and very little anything else.

11. The cheese course at The Wave… of American Flavors

After you’re done enjoying the rock shrimp cakes, stay for the cheese course dessert. Sure, The Wave… of American Flavors has the traditional sweet dessert, but the array of cheeses, spreads, dried fruits and nuts is a great way to end your meal before heading back out into the Florida sun.

12. Reubens at Earl of Sandwich

Called the best Reuben ever by one enthusiastic diner, the Reuben at the Earl of Sandwich has to be tried when you go to Downtown Disney. It’s got the perfect mixture of rye bread, meat, kraut and Thousand Island dressing so that each bite is perfectly balanced. Even better, the Earl of Sandwich has fast service, which is important, because Downtown Disney gets crowded when the sun goes down. 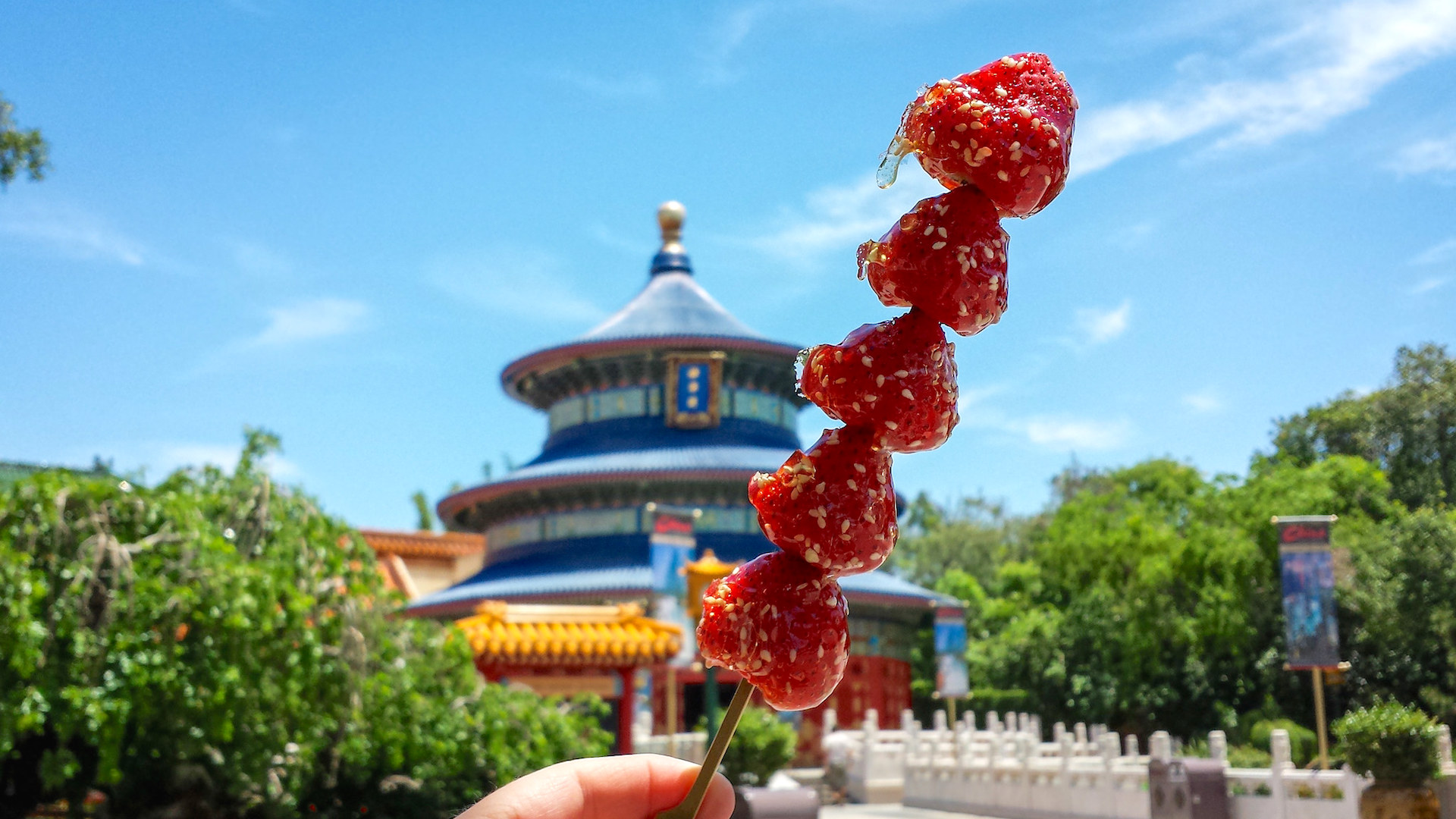 Make your way to the China Pavilion at Epcot, and reward yourself on your walk with this cold, refreshing treat. This skewer of Beijing-style candied strawberries has a perfectly crunchy sugar shell and a smattering of sesame seeds. You’ll never feel the same way about chocolate-covered strawberries again. 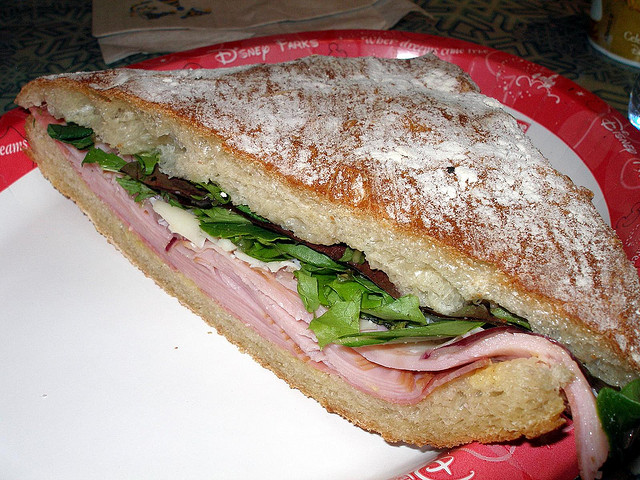 Quick counter service can be found just about anywhere in Disney parks and resorts. However, we have to give a shout-out to the sandwich service at Sunshine Seasons at Epcot. Found indoors near the environmentally focused rides in Epcot, Sunshine Seasons’ sandwiches were nearly over a square foot and 4 inches tall. With chips and a cookie, they were more than enough to feed two hungry Epcot tourists.

There are lots of great places to eat at Disney, but really, anywhere is great if you have the deluxe dining plan. If you do, every meal (which includes an appetizer, a meal, a nonalcoholic drink and a dessert) and every snack can be had for the scan of a MagicBand. It turns every meal into a gourmet experience and lets you try things like flatbreads and Savanna S’mores that you might otherwise pass up.

But be careful, because the Disney folks will try to run everything as a snack if they can, so be on the lookout. If you let them run your meals as snacks, you will end up paying for snacks and having unspent meal points on your plan. All you have to do is tell them you want to run your meal as a meal instead of a snack, and the cashier will be happy to do so (though they often tell you to go back and get more food), and you will end up with all the right points when you need them.