Lightsabers weren’t the only game in town in a time long ago in a galaxy far, far away. After seeing what Han Solo did to that tauntaun with one, it’s a good thing this Star Wars knife block allows for slightly more precise juliennes. (Amazon.com, $100)

Since freezing your friends in carbonite is just mean, try these Han Solo in carbonite ice cube trays at your next nerd hoedown. (Amazon.com, $14)

Image: This Is Why I’m Broke

Use the Dark Side of the Force to give your toast some much-needed fatherly love with this toaster shaped like Darth Vader’s helmet. It toasts the image of Vader’s head on one side and the Star Wars logo on the other. (This Is Why I’m Broke, $45)

Sprinkle your french fries with a little Empirical goodness with these Darth Vader and stormtrooper salt and pepper shakers. If you’re truly one of the Emperor’s followers, you’ll put the pepper in the stormtrooper and the salt in Vader, ’cause that’s how the Dark Side rolls. (Amazon.com, $16)

If you prefer your pepper freshly ground with the accuracy only a droid can provide, try this R2-D2 pepper mill. (Amazon.com, $58)

It’s no surprise R2 is a popular featured character. Given all the gadgets he has hidden in his cylindrical body, we wouldn’t be the least bit surprised if one of them was this R2-D2 pizza cutter with sound effects — or maybe he just used his buzz saw. (Amazon.com, $18)

Maybe the reason Darth Vader had his undies in such a wad was his lack of daily afternoon tea. Could happen. This Death Star tea infuser with TIE fighter chain holder might have made him a little less grumpy. (Amazon.com, $29)

Don’t let anyone tell you these aren’t the droids you’re looking for. This adorable set of measuring cups can be assembled to resemble our beeping friend R2. (Amazon.com, $25) 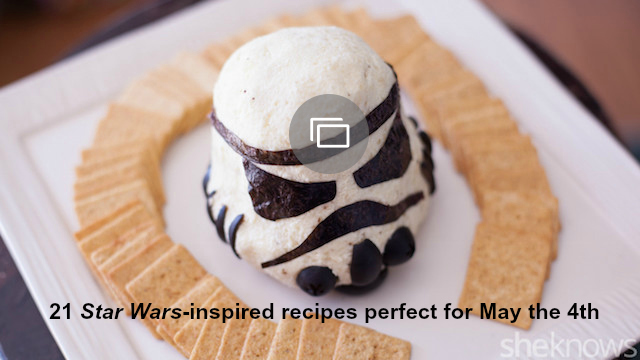