So you went to the warehouse store hungry and somehow managed to come home with a giant-sized bag of frozen chicken nuggets. It’s either plain nuggets night after night, or you figure out how to make them into something more.

And of course, that’s where Reddit comes in. Reddit never ceases to amaze me with its treasure trove of ideas on how to make cheap eats taste good. Who knew there were so many legitimately tasty ways to prepare frozen chicken nuggets? These hacks turn chicken nuggets into seriously delicious meals.

This sounds like no lasagna I’ve ever heard of, but I need it in my life immediately.

3. No need for takeout

Reddit says: Make General Tso’s chicken. “Nuggets (better quality can pass for takeout), some prepared sauce… A microwave steamer bag of broccoli, julienned raw carrots, and a dose of Sriracha. Over rice, or not. I do this regularly.”

I can see why… sounds like a darn good idea to me.

4. The casserole dreams are made of

Reddit says: Make nugget casserole. “Nuggets, tots or fries, and cheese. Dump it all in baking dish and bake. Takes like 15 minutes.”

Be right back… making nugget casserole.

It’s one of the more involved recipes in the thread, but it sure sounds worth the trouble.

Reddit says: Make chicken Parmesan. “Layer [the nuggets] in a baking dish and top with marinara and shredded cheese. Bake according to the baking directions on the nuggets bag/box. Easy and yummy!”

Sure beats pan-frying chicken and all the oil spatters that go with it.

7. Bring on the sauce

Reddit says: Make Buffalo chicken salad. “Cook and cut up the nuggets, toss them in hot sauce, and add them to a spinach salad. I add bleu cheese dressing because fitting into my clothes apparently isn’t important anymore.”

Worth it. Buffalo anything requires as much creamy, calorie-laden dressing as you can pack in the dish.

It’s the culmination of everything I’ve ever wanted in one bowl.

9. The easiest chicken soup ever

Considering my love affair with Top Ramen, I can get on board with this. 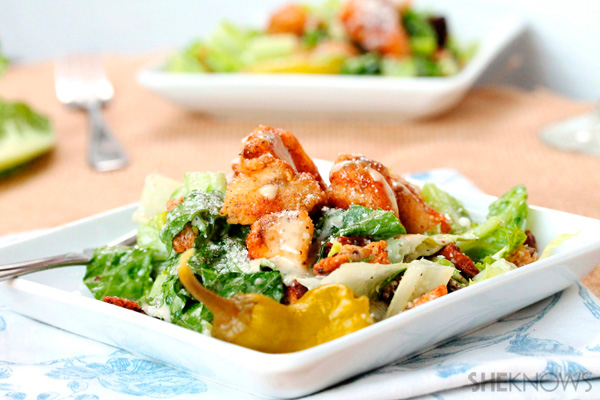 From our archives: Make chicken nugget Caesar salad. This recipe gets even easier when you swap in frozen nuggets. It’s like your favorite Caesar, but way better.