Indian food is delicious, but cooking it at home can be difficult. The cuisine of the Indian peninsula is full of exotic spices, amazing flavors and combinations you don’t find anywhere else. That doesn’t mean you can’t make it at home, but it will help if you have the right pantry.

It’s hard to tell if the best part about Indian food is how it tastes or how it smells. Either way, Indian cuisine is an assault on the senses in the very best way possible. Now, if you’re the cookin’ type who wants to learn to make this food at home, more power to you. You’re in for an exciting culinary adventure, but you’re going to need the right ingredients to make that happen. 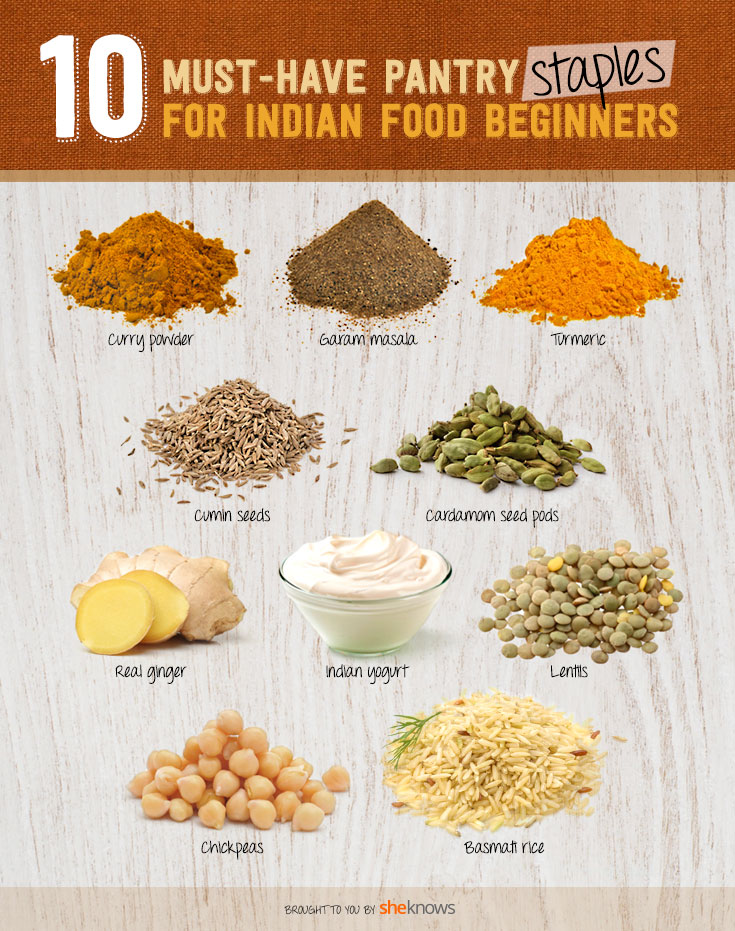 On one level, the inclusion of curry powder may sound obvious, and on another level, it may be offensive. There will be many who say that if they’re learning to cook Indian, they’re going to learn to make their own curry powder. If so, that’s fine. Just make a lot more of it than you need.

Still, whether you’re not the type to make your own curry powder, or if you just like to plan for emergencies, make sure you have extra curry powder. It never hurts to have more than you think you need (especially as your spices age and lose their potency), and frankly, adding a bit at the end can help kick up your dish’s flavor.

Garam masala translates literally into “hot spice” and is a slightly hotter version of curry. The thing with garam masala is that there’s no single right way to make it, and most families will have their own similar but distinctive version. Either way, you need to find a garam masala blend you like, because it’s a foundation of pretty much every other Indian dish that doesn’t use curry as its base (and frankly, some use both). Also, like curry, it makes a nice ingredient to toss in at the last second before serving.

Turmeric is a critical ingredient in many Indian foods (especially considering the fact that it’s what makes curry yellow). However, turmeric is often used on its own, with garam masala or on top of curry. By itself, this spice tastes sort of bitter and floral at the same time, but mixed with other ingredients, it’s great for balancing out other flavors.

If you’ve never had a cumin seed, imagine something that tastes like ground cumin (basically what gives Mexican ground beef its flavor) turned up about 10 notches. When you go to purchase cumin seeds, try to buy them whole. Many recipes call for whole cumin seeds, and those that don’t will benefit from having the seeds freshly ground for the best flavor.

Cardamom seeds have a bright, floral flavor and come in two varieties: green and black. Green are more light and aromatic than black, which tend to have a slightly more robust taste. Either way, some recipes will call for cardamom seeds of one color or the other (or both). However, you can substitute one for the other in a pinch.

OK, this ingredient takes you away from the pantry and into the refrigerator, but there’s just no substitute for real ginger in your Indian cooking. You can use the powdered stuff, but the real thing, freshly peeled and chopped, is fruitier, less acidic and generally plays well with other flavors. However, what’s really important is that you have ginger because it forms the foundation for many Indian flavors.

Again, Indian yogurt is not something you want to keep in the pantry per se, but it is important if you want to make some Indian dishes. For instance, it can be turned into paneer, stirred into korma or used as a flavoring agent in naan. The thing to keep in mind, though, is that you want to use Indian yogurt. Greek and American yogurts lack Indian yogurt’s tang.

There are also several foods you want to have in bulk when you make Indian food. Lentils top this list, as they are omnipresent in many Indian foods, including dal, which is lentil curry. They also find their way as an accompaniment in many other dishes. You can find lentils in yellow, green and red varieties. Yellow is traditional, but any will work.

Chickpeas are only slightly less popular than lentils in many Indian dishes. So if you’re planning on making lots of Indian food, keep dried chickpeas around for more robust dishes, canned chickpeas on hand when you want to throw something together quickly and chickpea flour when you want to make Indian breads and fried foods.

Lastly, when you make Indian food, you’ll want some rice. Basmati rice is traditional, and its nutty flavor goes best with curry, however any rice will do.