If you’ve ever wanted to explore a great new way of cooking — and make something that pleases the men in your life — then you should think about cracking the top off a beer and adding it to your repertoire. 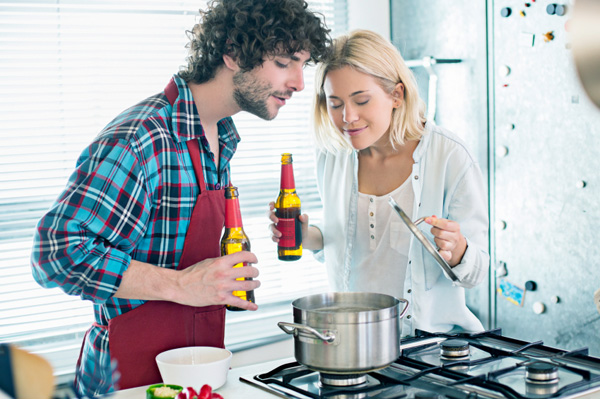 Beer was once reserved solely for drinking, but now many are discovering that the wide varieties of brew can enhance any meal from savoury to sweet.

Renowned blogger Jackie, from The Beeroness, explains, “I cook with beer, not for the novelty of it, but because beer has exceptional and complex flavours that should be explored and celebrated.” So, if you’re not a beer drinker, still give one of these recipes a go as the bitterness is usually lost in the cooking, but a unique flavour is present.

There are many types of beer you can use, with different recipes for each, but you should also consider swapping out the recommended beers for ones that are favoured in your household.

The Beer Cook (also known as Vanessa) says, “I could list the types of beers that are supposed to pair with certain types of dishes but I’ve experienced many cases where the least likely beer made the most wonderful pairing with a dish. Don’t be afraid to experiment…”

Now, nothing says “good pairing” more than a solid meat recipe that also includes a dash or two of beer. If you’ve got a guy around who you want to impress, then knock his socks off with a beer-infused main meal.

One of the most popular ideas is to use beer for braising. Recipes like this SheKnows one for a hearty braised beef in beer are great as you can use a wide variety of beers from lagers to stouts — whatever suits you or the people you are cooking for.

If you really want to up the romance, you could try The Beer Cook’s recipe for Valentine’s Day lamb chops with framboise sauce (using a raspberry beer). The blogger explains, “The sweet and slightly acidic beer does a nice job of balancing the savoury meat and potatoes.”

Apart from the obvious ways to cook with beer and meat, there are also some great recipes for other savoury meals that really ramp up the flavour stakes with a slug of beer.

The Beeroness has a great recipe for a Caesar salad that uses an Indian Pale Ale (IPA) beer in the dressing. An IPA beer is lighter in colour as it is made using a process that has less smoking and roasting than other beers — so it’s great for beginners learning to cook with beer.

Another great way to enjoy beer is during brunch or lunch — not just to drink, but used in the base of a pizza! Former MasterChef contestant Chris Badenoch has made a name for himself using beer in recipes.

In his blog recipe for beer pizza dough and toppings, Badenoch suggests, “How about prosciutto and egg, or spinach, fetta and egg for breakfast? Or pancetta, anchovy and rocket, or caramelised onion and fetta for lunch?”

In the mood for a drink? Try one of these 10 drinks and cocktails from around the world >>

And, just when you thought there was nowhere else to incorporate beer, up pops the dessert menu. Yes, you certainly can add beer to sweet recipes; in fact, what a great way to man-up cakes!

One of the most well-known combinations in this category is chocolate with a dark and heavy stout. Super creative baker and cake decorator Sharon Wee from Sydney shares a moist Guinness and chocolate cake recipe, which she tops off with a Swiss meringue buttercream and caramelised bacon. Now, that is sure to get the man in your life excited!

Beer is also great when added to doughnut recipes, breads and frostings. It’s all about getting creative with a whole new flavour spectrum!

44 mins ago
by Justina Huddleston