It’s finally time to turn up the oven or turn on the slow cooker and enjoy warm and hearty dinners. 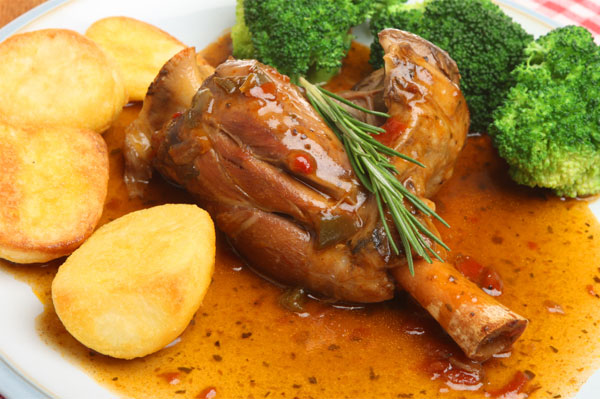 Nothing says fall-off-the-bone delicious than lamb shanks that have been bubbling away for hours in a rich, dark sauce.

Whether you want to use a set-and-forget slow cooker or take the time to do it slowly in the oven, this meal is easy to put together and simply divine once bedded on mashed potato, with a side of red wine.

Lamb shanks are a moderately-priced cut of meat that really only need time to ensure they are cooked properly.

Sydney-based home delivery meat supplier, Butcherman, says, “Lamb is an extremely tender meat and the shank is one of the most delicious cuts, however, many people don’t know how to cook lamb shanks. Often people believe that the shank is a tough cut of meat and therefore avoid buying it. The truth is lamb shanks are an extremely soft and tasty meat when cooked properly, and are certainly worth learning to prepare!”

More meat recipes? Why not try this meat pie recipe that everyone will love? >>

This recipe has been adapted from Carolyn’s hearty lamb shanks recipe, posted on her blog Desire Empire. There’s an option for you to slow cook this in the oven or in a slow cooker.

Don’t know what to do with the leftovers? Carolyn says, “I will serve the leftovers as a soup the next night (slow cooker version only) having taken the meat from the bone of the [shanks] and adding some more beef stock and/or water and salt.”