Since opening its doors in 1995, The Fat Duck remains one of the world’s most intriguing and imaginative places to dine. Over the years it has won numerous awards, including three Michelin stars and is considered one of the world’s best 50 restaurants.

Unless you’ve been living under a rock, you will have seen or heard of Heston Blumenthal. From his food-range collaboration with Waitrose to various Channel 4 programmes — such as approachable cooking techniques to whimsical cooking challenges. Blumenthal is the modern-day Willy Wonka known for his multi-sensory cuisine, often referred to as molecular gastronomy due to his scientific approach.

Check out The Best of the British restaurants >>

Before the books and television shows, The Fat Duck was Blumenthal’s first restaurant. Just outside of London, this award-winning restaurant is housed in a 16th-century cottage that was formerly a pub in Bray. Despite its status in the culinary world, The Fat Duck sits unassumingly on the Bray High Street and the dining room is simply modern with fresh citrus colour schemes and crisp white linens. Although the dress code is “comfortable”, most diners are dressed fairly smartly. There is no air of pretension, as one might expect to receive from other establishments of a similar status.

A meal at The Fat Duck is unlike any an ordinary person would ever experience. This is theatre at work and play. There is a ratio of one chef to one diner and the restaurant accommodates 40 diners during any given service. Renowned for their £195 per person 14-course tasting menu — plus an optional cheese course — you begin your culinary journey with a Bible-sized wine list featuring impressive names and lesser-known labels. Clueless? There is a sommelier on hand to guide you with suggestions.

As grown adults with a deep appreciation for food, you watch anxiously with child-like wonder and awe as course after course is effortlessly presented to you by the engaging staff: from the first time-sensitive course of nitro-poached gin and tonic aperitifs, which cleanses the palate, to the utterly whimsical Mad Hatter’s Tea Party and then the hot and iced tea. 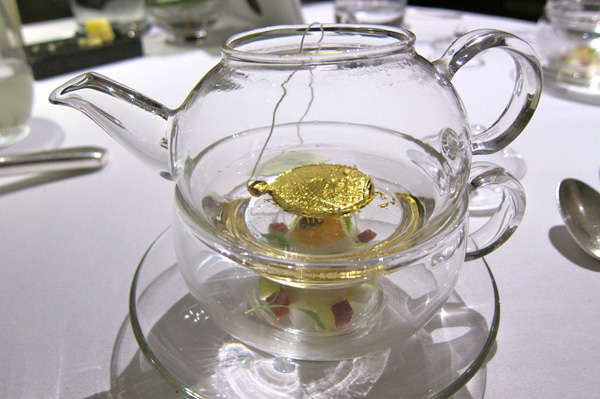 Inspired by the 19th century literary classic Alice in Wonderland, the Mad Hatter’s Tea Party features mock turtle soup, a pocket watch and a toasted sandwich presented in a playful fashion. The gold pocket watch is placed into a transparent teapot and hot liquid is poured over the brilliant gold leaf, dissolving the watch into mock turtle soup. Each dish is multi-sensory, unexpected and magical, leaving the diner wide-eyed and giggling with glee.

To dine at The Fat Duck, one should have a great appreciation of food and the craft and skill behind it. The £195 per person price tag alone is hard enough to swallow, but if one is passionate about food, The Fat Duck would make a memorable once-in-a-lifetime experience. With that in mind, it is also virtually impossible to book one of the 15 coveted tables. The Fat Duck is known to receive more than 30,000 phone calls per day from around the world and all the tables are booked up two months in advance. Which means, whether you are able to book by phone or online, getting a table at The Fat Duck is like winning one of Willy Wonka’s golden tickets.