Back in the days when your grandparents were swingin’ their way from holiday party to holiday party, some very interesting cuisine was served. Sure, it was perfectly normal back then, but today it looks a little… different. Take a culinary journey with me through the holiday dinners of Christmas past.

1. This was how guests were welcomed 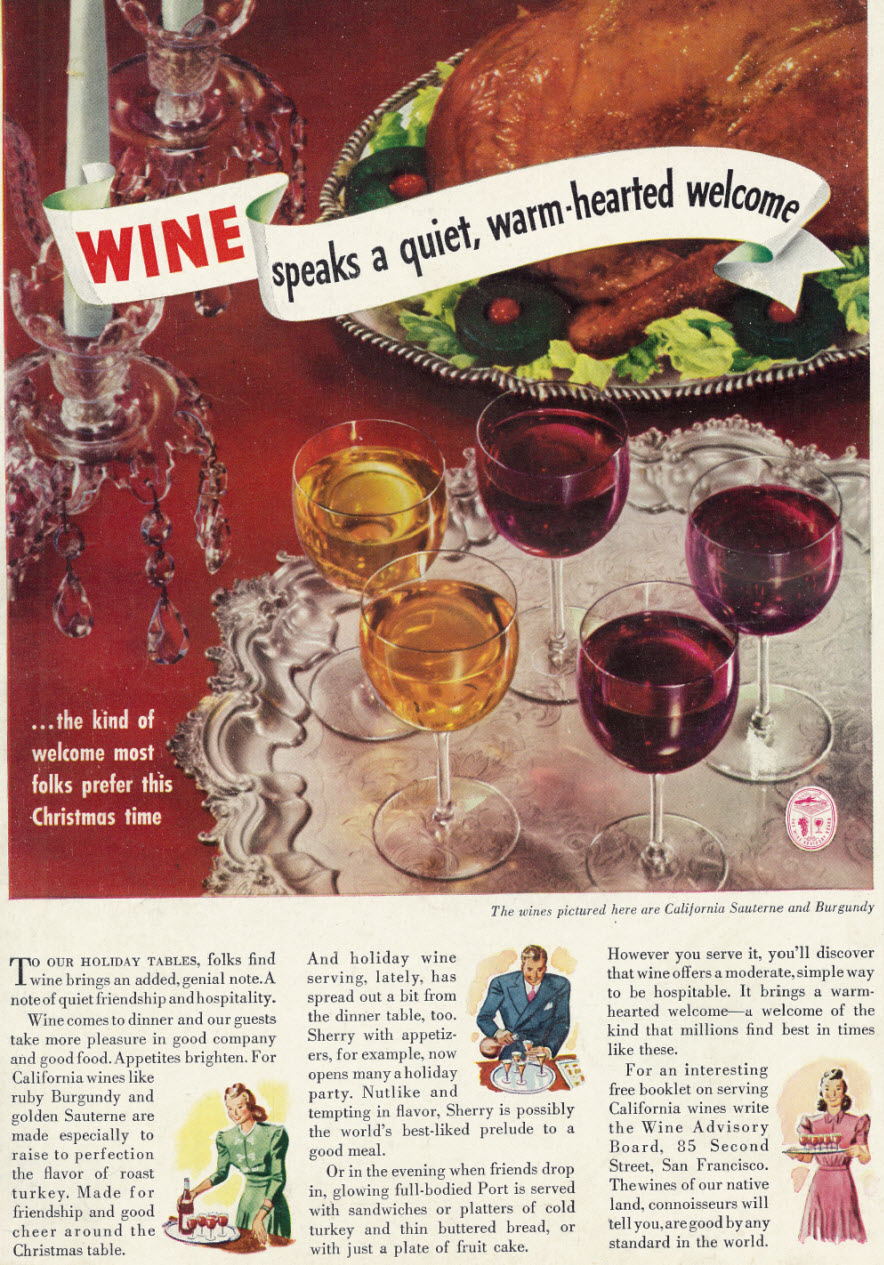 This is a damn fine tradition and one we should bring back, if you ask me. They’re right — wine is the kind of welcome most folks prefer.

2. This was called perfection 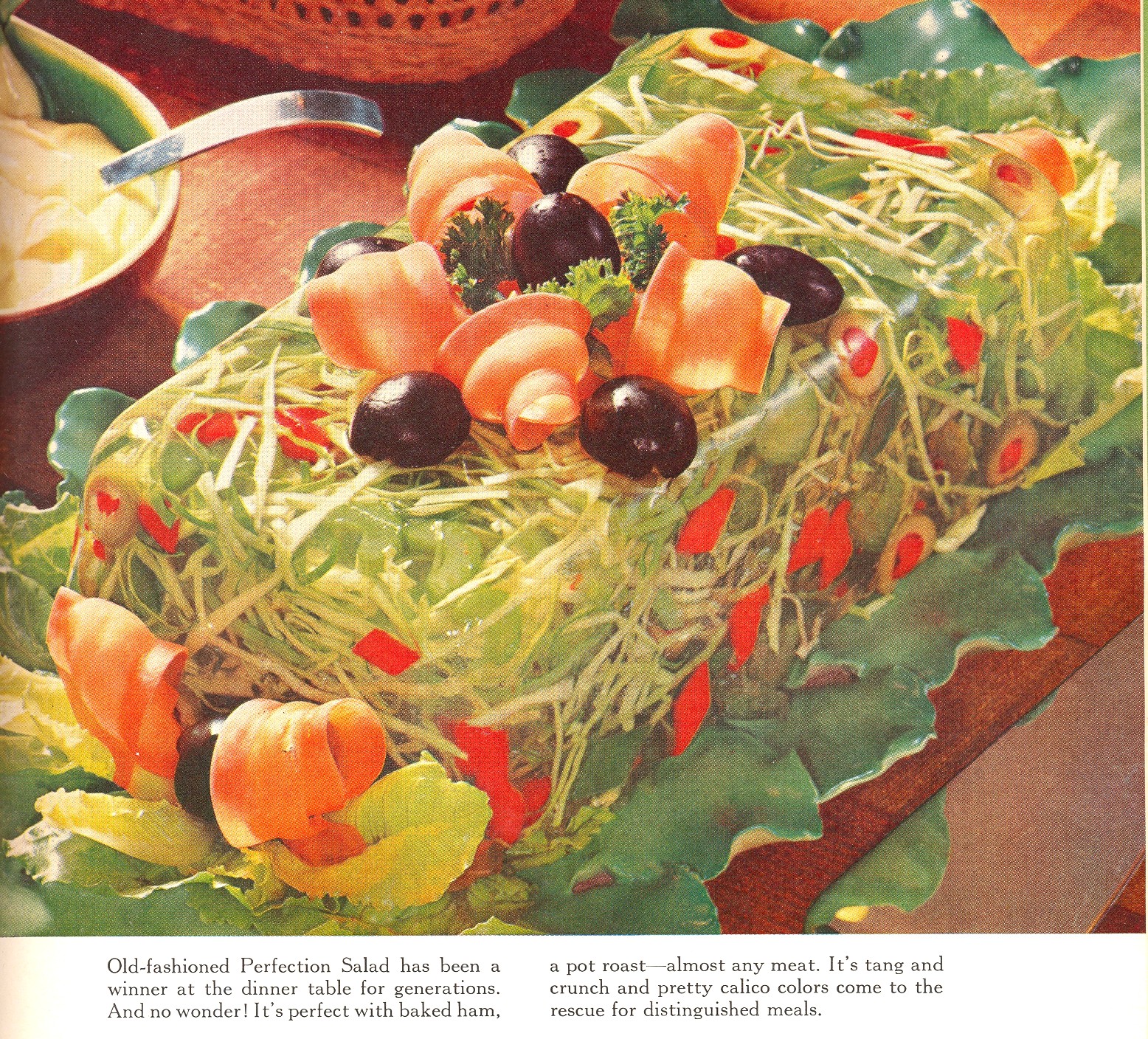 Ladies and gentlemen, this is Perfection Salad: cabbage, celery and olives, all ensconced in lime Jell-O. Also, it goes with almost any meat. Bonus.

3. This was what passed for ham

You’ve got to hand it to them for having no waste or bone, but the whole ham-shaped-like-a-can thing gives me pause. I prefer my ham to be ham-shaped.

4. This was how you got your serving of vegetables

Because a dish is always better with Jell-O, it’s best to arrange your five-in-one can of veggies around tomato aspic, also giving you the perfect place to put your favorite tangy salad dressing (which looks oddly fluffy).

5. This was how fruitcake was made… with beef 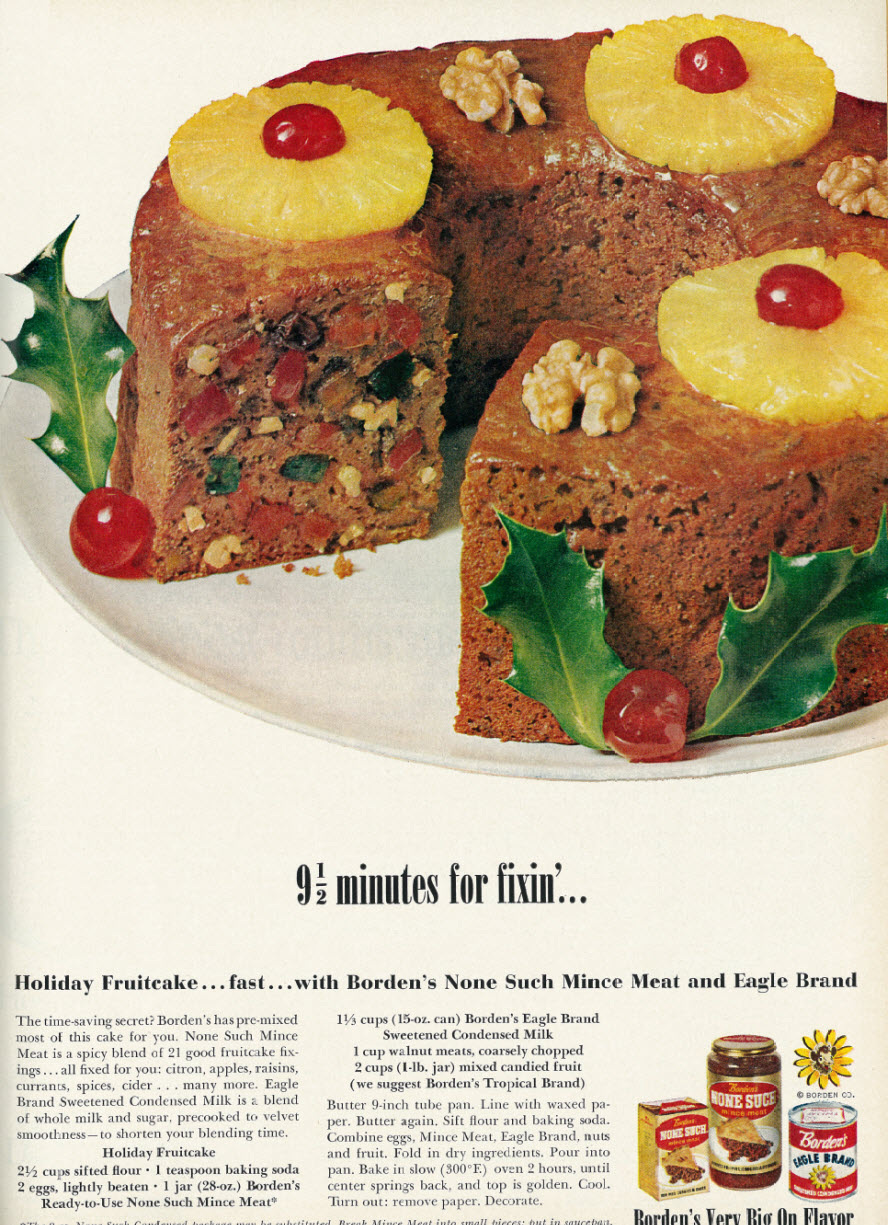 It doesn’t seem like any amount of rum would make a beefy fruitcake my dessert of choice, but hey, to each their own. Bonus that it takes only 9-1/2 minutes for fixin’, though.

6. This was how you made an entire meal with cans 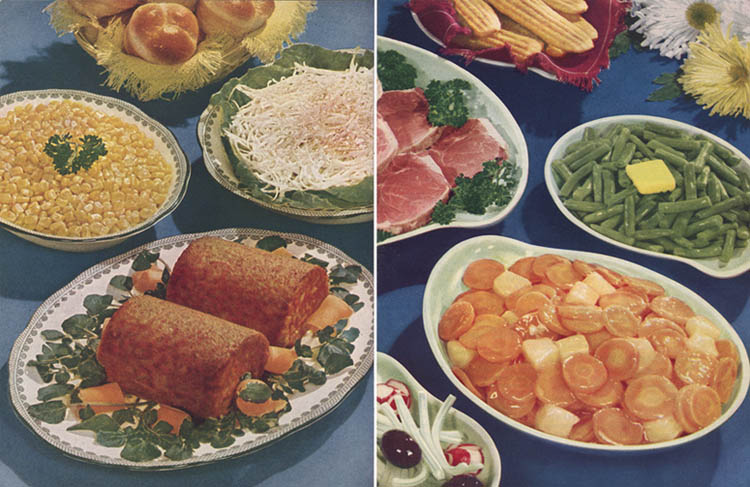 Your main course and all the veggies, extra-shiny carrots included, and only a can opener required.

7. This was how your meal started (otherwise known as the most awesome way) 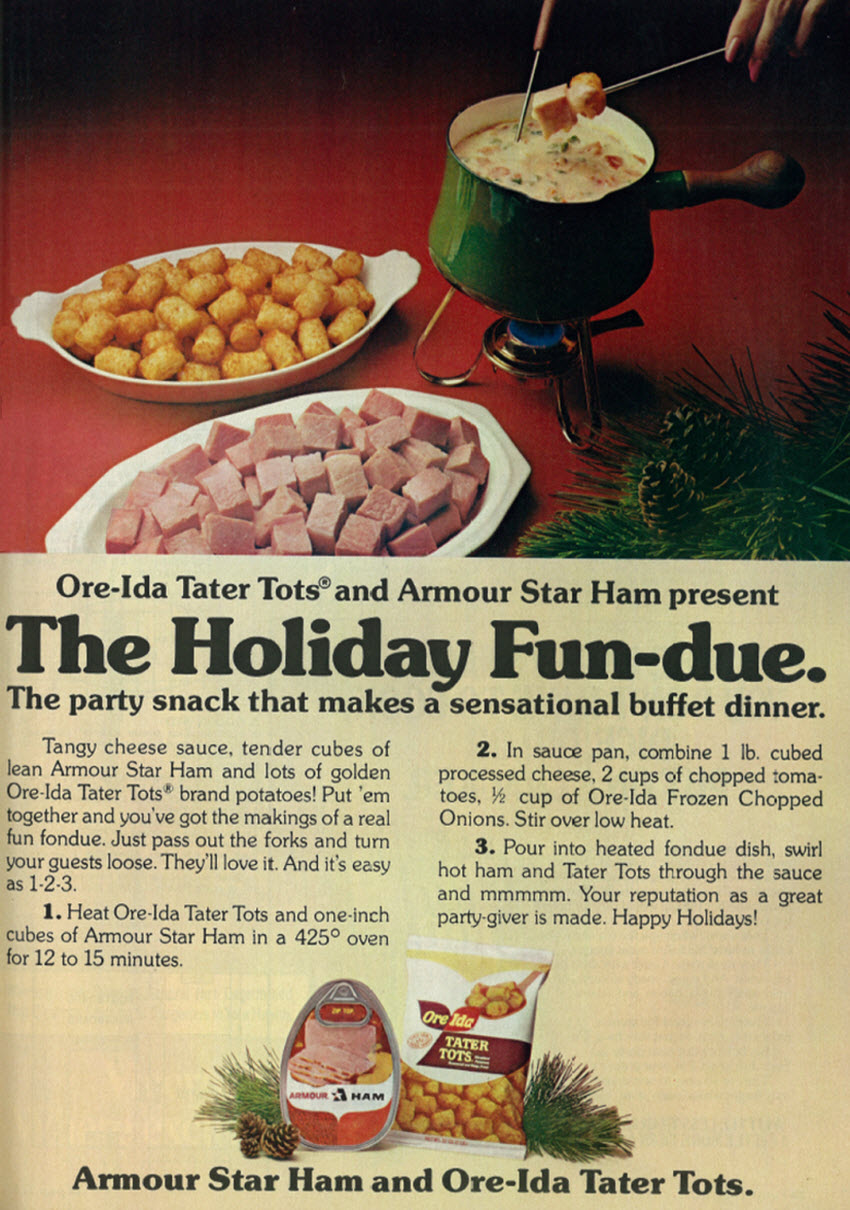 I take back everything I ever said about canned ham. I want to start every holiday meal with these ham and tater tot skewers dipped in cheese sauce. Fun-due indeed.

8. This was another way your meal started (in a slightly less awesome way than Fun-due) 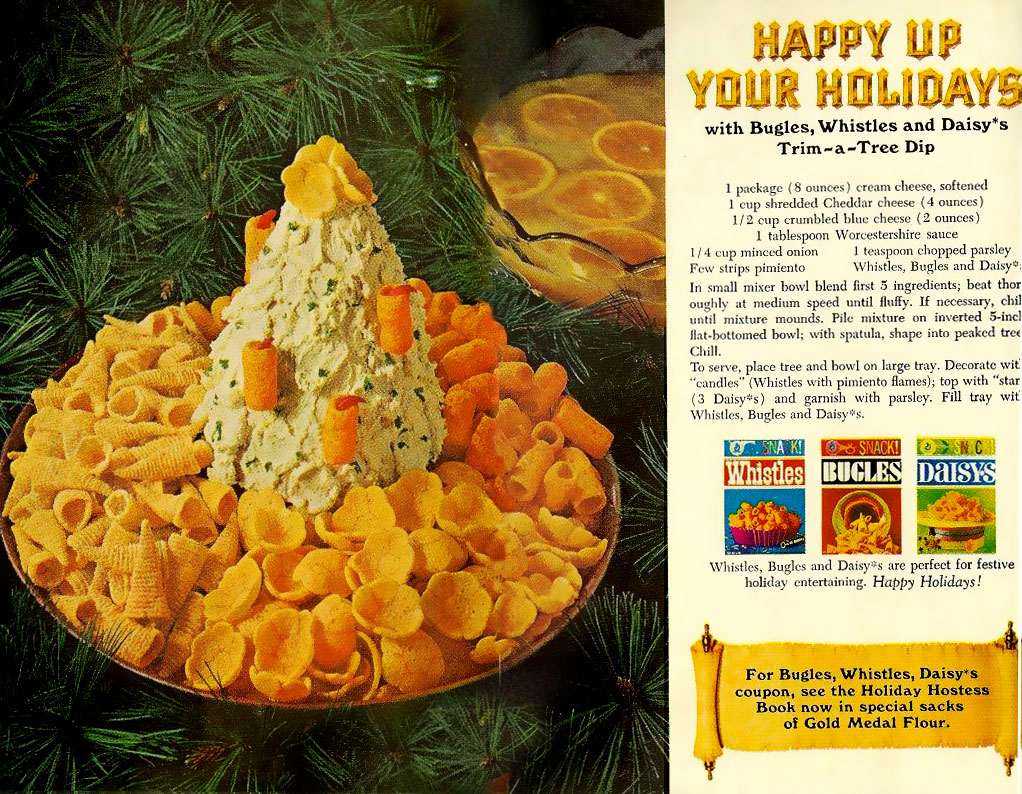 Mound up a whole bunch of cheese in the shape of a Christmas tree, stick some Bugles on it, and call it an appetizer.

9. This was how you included even more Jell-O in your meal 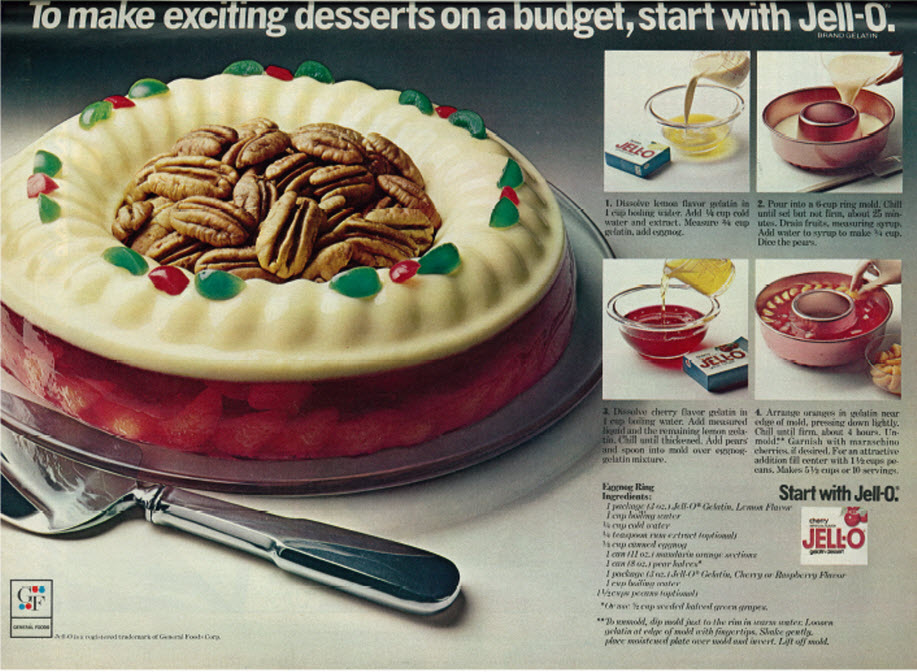 You had better love Jell-O, because it’s in all the courses. Plus, who doesn’t want to end their meal with the cherry Jell-O-eggnog-walnut combination?

10. This was how you kept the party going all night long 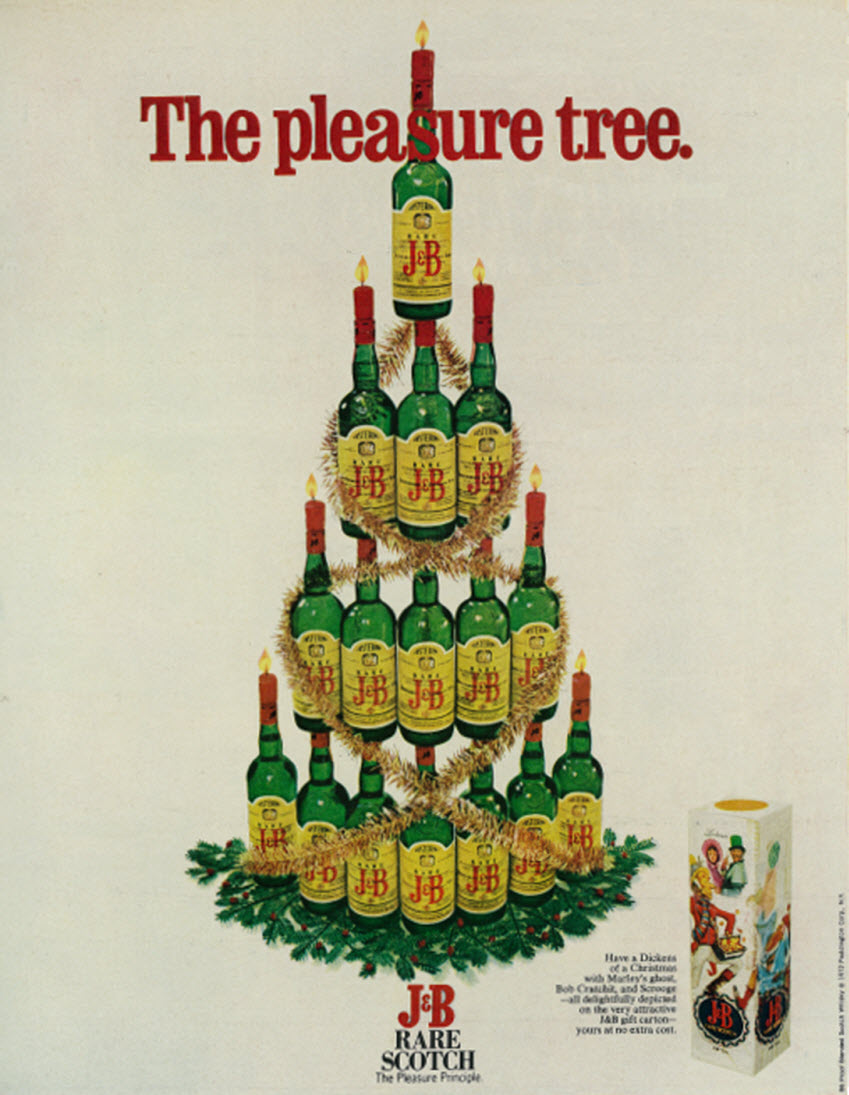 The pleasure tree. Sounds like a pretty accurate description to me.