Some celebs have some pretty crazy requests on their contract riders. Everyone needs to eat, but sometimes people think these stars take it a bit too far.

What’s a rider? It’s part of their contract that spells out what the celeb needs, usually in their dressing room. They’re important for busy celebs who may not have time to get themselves food (and if they’re helping your venue make mad cash, should they really have to buy their own meal?).

Britney Spears kicks us off with her request of McDonald’s cheeseburgers sans buns, 100 figs and prunes and toothpaste.

His stream-of-consciousness rider includes requests for things like sandwiches, “but hopefully not one of those sandwiches from Subway with beef and alfalfa sprouts sticking out, like a Florida retiree’s bikini bottoms. Yuk.” Read Iggy Pop’s whole rider on The Smoking Gun.

When he renegotiated his contract with the Washington Redskins in 2012, tight end Chris Cooley tried (and failed) to get a case of beer written in.

In addition to some crazy videos, the Foo Fighters are known for their epically hilarious rider requests, which in the past have included fun stuff like a Foo Fighters activity book featuring cartoony depictions of their needs. To see the full Foo Fighters rider, check out The Smoking Gun. 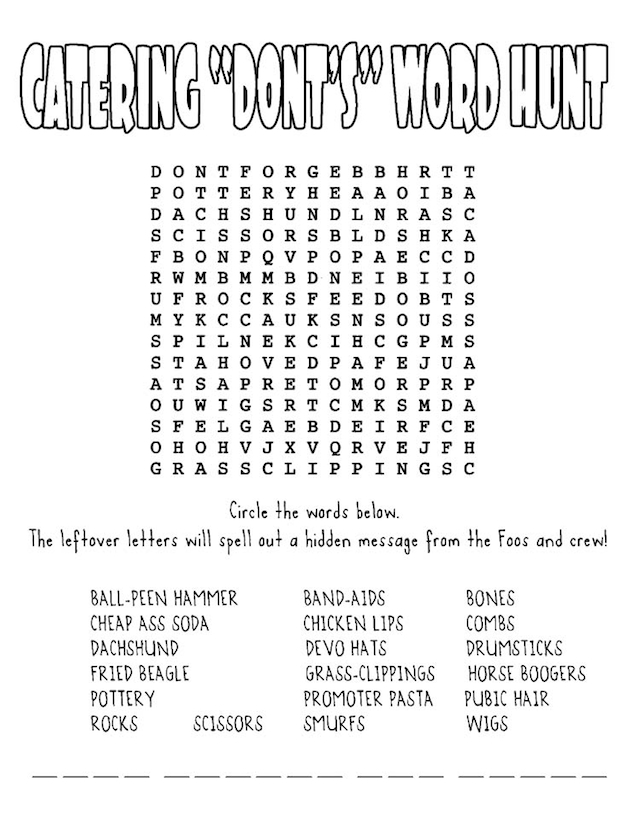 Image: Gus Brandt / If you complete this puzzle, you’ll see they want to make sure the venue doesn’t forget the bacon!

Queen Bey, indeed! Beyoncé has some pretty pricy demands on her rider. She wants her dressing room stocked with titanium straws from which she can drink special alkaline water (exactly 21 degrees F) and a hand-carved ice ball to cool her throat after every performance. For snacks, she skips the junk and opts for oatcakes, green-only crudités and almonds served on glass platters.

Everyone knows about Van Halen’s M&M’S-with-no-brown-ones request. Turns out that was just their manager being sneaky to find out if the venue had actually read the contract (and their technical requirements). But what was really crazy was the obscene amount of alcohol they requested: a case of beer, Jack Daniel’s, Absolut, Grand Marnier, Bacardi, Cointreau, three bottles of wine, a bottle of tequila, limes, salt, shot glasses, bloody mary ingredients and a blender.

Spicy fried chicken wings and a cheese platter aren’t such strange requests from someone who has a diva rep like Nicki Minaj’s, but why does she need three flavors of chewing gum?

Ms. Carey, can you please explain to us why one would drink Cristal through bendy straws?

Those familiar with Aiken won’t be surprised by some of this Southern boy’s rider requirements. He requests a basket of green apples (preferably Granny Smith), applesauce, a case of room temperature bottled water (that isn’t Evian) and a loaf of white bread. Insert your own joke here, but Urban Dictionary recommends something involving Bath & Body Works products, golden retrievers, cheap chardonnay or Kenny G.