Hungry? We hope so, since we’re delving into some of the hottest food trends for spring. From what to shop for and why, there’s lots to get excited about when it comes to eating as the weather warms up. 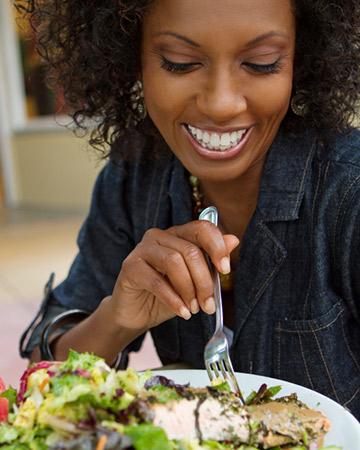 We asked Darrin Nordahl, food blogger at 365 Whole Foods and author of Public Produce: The New Urban Agriculture, for his insight into what people will be eating this spring.

There’s no better time to go green (on your plate, that is) than after a winter of consuming high-calorie comfort foods, and this spring is all about salad. “The bounty of salad greens signals the arrival of spring. Arugula, mache, mizuna, spinach and lettuces proliferate the grocery stores and the farmers markets,” says Nordahl. While people relish these tender green salads, he suggests branching away from traditional salad fillers and spicing things up with other items. “Salads needn’t always be green. Indeed, sometimes we need an occasional break from the barrage of leafy greens.” He suggests trying something a little different, such as jicama and the last of the season’s citrus.

As we move away from the heartier meat dishes of winter, fish is a natural alternative as the weather warms up, but there’s more to your fish dish than just going to the grocery store. “How fish are caught [is] increasingly weighing on our decision as to which fish to eat,” says Nordahl. He cites Seafood Watch as a good program to help consumers make ocean-friendly seafood choices. “It has been so influential that Whole Foods no longer sells fish that are coded RED in the Seafood Watch directory, meaning that are currently being harvested using harmful, non-sustainable methods.”

Once-popular fish, such as orange roughy, Chilean sea bass and even some varieties of tuna, will no longer be favourable to consumers, Nordahl says, because of the destructive fishing practices used to land them.

Eating local has become de rigueur for most of us, but the next iteration of eating local is consuming what grows immediately outside your kitchen, but not just the vegetables you plant in your garden, says Nordahl. He’s referring what you typically curse: weeds. “Eating weeds is starting to gain acceptance as one of the most ecologically friendly way to rid herbaceous invaders from your yard,” he explains.

While dandelions have long been recognized as a tasty salad green in France and the same with purslane in China, North America has been less accepting of eating what we usually pull out of our gardens. But that’s about to change, notes Nordahl. “Farmers are now cultivating weeds and selling them at high prices at farmers markets.” Rather than pay high prices, he suggests going the DIY route. “You’d do much better to just pick the ones in your backyard. They are free and quite nutritious.”

Carb-controlled diets are nothing new and as popular as ever, but the most recent twist on the trend is the paleo diet or “Caveman Diet,” as it’s often referred to. This on-trend diet eschews processed, grain-based foods in favour of those foods most likely consumed by prehistoric man: meat and leaves, roots and fruits, explains Nordahl. “Nutritionists and dietitians argue that many of the diseases that plague us today — like obesity, cancer, type 2 diabetes — are the result of the Western diet, a diet based heavily on grain agriculture and the refining of those grains.”

If you’re bored of kale and spinach, why not try adding some Asian greens, another spring trend worth noting, to your diet? “At one time obscure to North Americans and only found in ethnic markets, Asian greens are starting to become commonplace even on our supermarket shelves,” says Nordahl. “Canadians and Americans are discovering what the Chinese and Japanese have known all along — that Asian greens are more tender, more delicately flavoured and often more versatile than our more common greens.” Check out your local farmers markets for all sorts of unique spring greens, such as Chinese mustard greens (gai choy), Chinese flowering cabbage (yau choy), bok choy, tatsoi, and even new varieties, such as misome.

Fabulous food bloggers to get to know this year
4 Surprising ways to use tofu
Podcast of the month: The Dinner Party

Martha Stewart’s Cacao Spice Cookies Are So Good, You Won’t Want to Swap Them