If you’re still trying to uphold your New Year’s health resolutions, you might be avoiding desserts altogether.

Related story This Breakfast Sandwich Maker Has Over 23,900 Five-Star Reviews & Will Kick Your Morning Drive-Thru Routine To The Curb 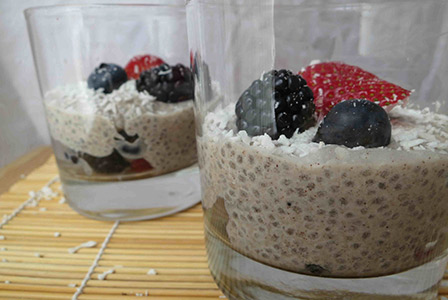 But with this tasty chia pudding, you’ll be doing your body good while indulging your sweet tooth. Who knew such a thing was possible?

If you indulge in a piece of cake or a bowl of ice cream at the end of your meal, you could be consuming upward of 300–400 calories. That’s practically a whole other meal in itself! Plus, many desserts are virtually void of any nutritional value. Fortunately that isn’t the case here. This coconut and berry chia pudding is so healthy you can even enjoy it as a nutritious breakfast or snack. It’s loaded with superfoods that will give you an energy boost without the calorie slam. Just keep in mind it yields four smaller, more reasonable portions than you might be used to. But for the most part, a small, sweet treat is all your body needs. This is one dessert you can pat yourself on the back for enjoying.

This recipe makes four small, diet-friendly dessert portions, but it can also be used as two more sizable breakfast portions if desired.