Some food facts are highly publicized, while others are neatly swept under the rug. Perhaps it’s for good reason, because you may very well wind up cowering in a corner after you hear these terrifying truths about your favourite foods. 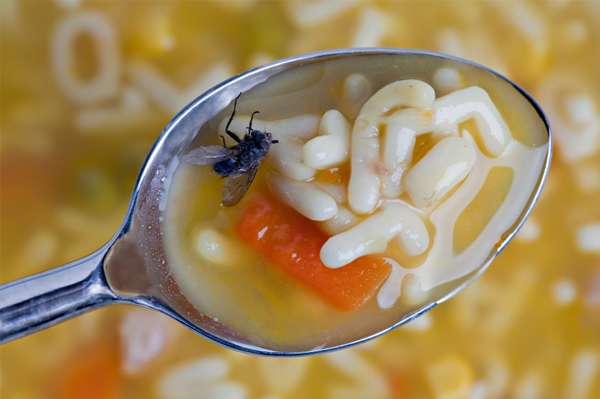 Almost too many calories to count

We all know to greater or lesser extents that fast food isn’t good for us. But it’s hard to get the full scope of just how unhealthy it is until the numbers stare us in the face. So if you’d prefer to live in blissful oblivion the next time you walk into your favourite fast food joint, you may want to skip over this next little bit, because what we’re about to tell you isn’t pretty. Ever heard of Burger King’s Triple Whopper? Well, it certainly lives up to its name, as it rings in at a whopping 1,230 calories.

Or maybe you only stop in to get a quick meal to start your day. Well, if you get the Burger King Ultimate Breakfast Platter, you better plan on not eating much for the rest of the day, because it’s going to fill you up with a total of 1,450 calories. And don’t dare get a sweet treat to wash it down, because a large chocolate milkshake is 980 calories. Wow!

University of Washington researchers did a study to find out which foods in the grocery store give you the most bang for your buck. And by “bang,” we mean calorie content. They found it is far less expensive to fill yourself up with more calories by buying low-nutrient foods such as candies, pastries and baked goods. Fruits and vegetables may be high in nutrients, but they’re more expensive for the amount of calories they give you. And those who are hungry and short on cash are more likely to gravitate toward the foods that will fill them up for less. The study also found that healthier foods are more likely to increase in price due to inflation, while the prices of unhealthy foods remain relatively stagnant. The study’s lead author, Adam Drewnowski, explained, “Not only are the empty calories cheaper, but the healthy foods are becoming more and more expensive. Vegetables and fruits are rapidly becoming luxury goods.” But of course, when all is said and done, you can’t really put a price on your health, so don’t quit buying those leafy greens just yet!

As you’re downing that bag of gummies or handful of marshmallows, you know what you’re eating isn’t necessarily the best thing in the world for you. But if one of the items on the ingredient list is “gelatin,” you may be getting more than you bargained for. That’s because gelatin is made by boiling the skin, tendons, ligaments, and/or bones of cows and pigs in water. It is then used as a sticky thickener for sweet treats such as candy and Jell-O. Doesn’t taste quite the same now, does it?

Salad may not be the answer

OK, so you’re on a diet. What do you immediately gravitate toward eating? Likely salads are an easy go-to. But not all salads are created equally. Taco Bell’s Fiesta Taco Salad with beef, for instance, is going to cost you 780 calories and 42 grams of fat. Even the salad dressings you buy at the grocery store can ring in at well over 120 calories per tablespoon. Yikes! To avoid this scary food fact, make your own healthy salad dressings at home.

As you enjoy that handful of nuts or spread some peanut butter on your toast, you’re likely feeling pretty good about your healthy choice. But you might not be quite so satisfied if you knew what the FDA allows in them. For example, shelled peanuts are deemed unsuitable for consumption only if an average of 20 or more whole insects are in a 100-pound bag. And peanut butter is good to go if it has less than 30 insect fragments and no more than one rodent hair per 100 grams. Mmm… tasty.

The labels are lying

Food sciences professor Bruce Holub at the University of Guelph tested a range of food products to see if they lived up to the claims made by their nutritional labels. Holub told CBC News that although products are allowed a 20 per cent margin of variability, 15 per cent of the items studied surpassed the legal limit. Can you believe that? We thought the 20 per cent margin of wiggle room was crazy enough, but some companies are even going over that! It makes you wonder if there’s even a point to reading before you buy.

A study done by The United Kingdom’s Food Standards Agency found that when food colouring was added to beverages, it had adverse effects on the behaviour of children. So if you don’t want to deal with hyperactive kids, maybe hold off on the Skittles and Kool-Aid Jammers.

Although hormonal growth promoters have been banned from the European Union, they are still legal in Canada and used on our beef cattle. Hormonal growth promoters are used to increase lean tissue growth in animals to a degree that would not occur naturally. If you want to keep added hormones out of your diet, stick to organic beef.

Who doesn’t love a hefty hunk of mould on their berries? What’s that, you say? You’re not a fan? Well, you better get accustomed to it, because the FDA holds back strawberries only if the average mould count is over 45 per cent. But if a little over half of those berries are mould-free, they’re good to go! And if you think that’s bad, wait till you hear this: Other berries such as raspberries and blackberries hit the shelves if their mould count isn’t over 60 per cent and there aren’t more than four larvae for every 500 grams. Hope you enjoy a little extra protein in your breakfast parfait!

A pinch of maggot on your muffin?

If you love adding tasty twists to your meals with fun spices, you may want to skip this one, because you’re about to learn just how much of the content on your spice rack isn’t spice at all. Ground cinnamon, for instance, is granted a pass by the FDA so long as it doesn’t have more than 400 insect fragments and 11 rodent hairs per 50 grams. So half a cup of cinnamon could have 10 rodent hairs and 399 insect fragments, and still be deemed good to go. It gives a whole new meaning to flavouring your dinner.