Store-bought roasted red peppers are pricey and often come packed in unhealthy and unnecessary oils. So why not make them yourself with this simple recipe? 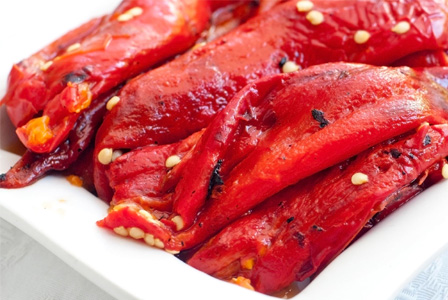 Have you ever gone to a restaurant and particularly enjoyed a salad, sandwich or pasta that had roasted red peppers in it? We hope so! Roasted red peppers are incredibly flavourful. Unfortunately, however, they seem more complicated to prepare than they actually are, and for that reason many people are too nervous about making and using them. And the fact that small jars of them cost around $5 turns off many individuals. But don’t worry, with this simple recipe you can make them for a fraction of the cost. And they’ll be far better for you too.

How to use them

All right, now that you have some delicious homemade roasted red peppers, it’s time to make use of them. An easy option is to toss them into a sandwich for a whole new lunch experience. Everyone in your family will love them in this Mexican-style grilled cheese. Or if you want to try something new, throw them into a food processor with a jar of drained artichokes, a handul of black olives and a couple of sun-dried tomatoes for a terrific tapenade that’s great on toast. Looking to treat your family to an exotic brunch? Combine the roasted red peppers with sauteed mushrooms and mozzarella cheese, then wrap it all up in a scrumptious homemade crepe. And you can always add them to your usual salad or pasta recipe for a flavourful twist. You really can’t go wrong where roasted red peppers are concerned!