Celebrities from Jason Mraz to Alicia Silverstone have been discussing the benefits of eating raw foods for years. And with the increase in raw and organic restaurants opening up, there’s no doubt it’s a growing trend. 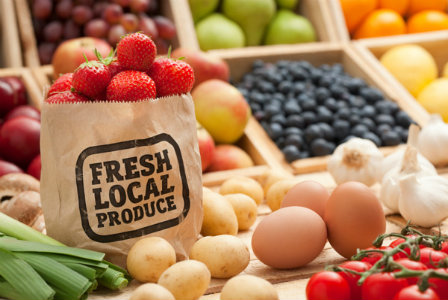 We sit down with owner of Nud Fud and registered nutritionist Julia Kirouac to ask the question: “Why raw?”

As a holistic nutritionist, Julia Kirouac knows a lot about helping people to be the healthiest they can be. And as the owner and founder of Nud Fud — a maker of raw, organic, gluten-free snacks — she is well aware of what healthy options are out there and how you can get your hands on them. This is one smart woman whose advice you will definitely want to hear!

What qualifies as “raw food”?

Although scientists haven’t unanimously agreed on a specific definition, it is generally accepted that food products must not have been processed in temperatures over 118 degrees F to be considered “raw.”

Kirouac explains that when you eat foods in their natural state (or as close to it as possible), all their enzymes remain intact. When digested, those enzymes go to work breaking down the product instead of causing your body’s enzymes to have to work overtime to get the job done. When enzymes have been removed from food and your body has to do everything on its own, you wind up feeling tired more quickly, whereas raw foods allow you to use your energy for other things. Plus, the nutrients in raw foods remain intact as well.

Kirouac asserts that raw foods are more abundant and varied in some urban areas than in others. But she also feels that raw food consumption is more than just a passing trend, and if what you’re looking for isn’t at your local store right now, it’s probably coming soon. Don’t be afraid to speak with the owner about starting to carry a certain food item, or check out the internet to order a few things right to your home. Kirouac is a huge supporter of health food stores, as they tend to be independently owned and shopkeepers therefore know a lot about what they’ve ordered, what they carry and what new products they can get their hands on if there’s a demand for them.

Think switching to raw foods sounds difficult? Try approaching it one step at a time. Have you ever eaten an apple or a few cherry tomatoes? Then you’ve already started your journey toward enjoying raw foods! Now it’s just about preparing your favourite natural foods in fun and tasty ways. Julia recommends tossing some fruit in a blender with a handful of spinach or kale to create a scrumptious smoothie. You can also have fun trying out new vegetables and fruits you might not have otherwise considered. Stop by a local farmers market to snag some fresh, organic, local produce.

Kirouac firmly believes (and we couldn’t agree more!) that salads don’t have to be boring. Start with some mixed greens and layer in nuts, hemp seeds and dried cranberries. Then drizzle it with a homemade dressing made of avocado oil, apple cider vinegar and a little bit of honey for a delicious lunch or dinner. You can also make your own nut butters by blending raw nuts in a food processor. Or create your own all-natural juices using a juicer and your favourite fruits and vegetables. Raw food doesn’t have to be complicated, and it sure can be delicious!

15 mins ago
by Justina Huddleston