With spring here, it’s time to lighten up on the heavy fare, and one great way to do that is with a light but satisfying soup. 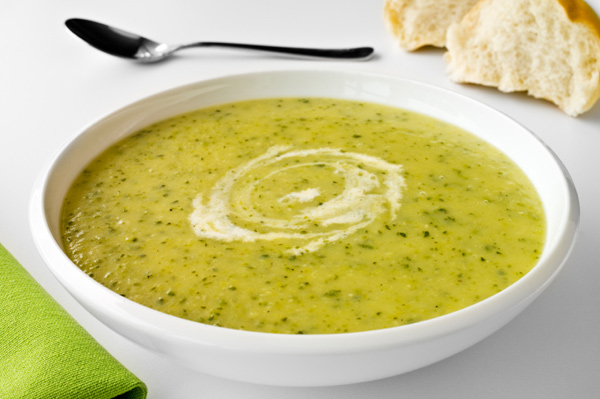 Now that spring’s officially sprung, it’s time to put aside those heavy meals and choose lighter foods. We can think of no better way to highlight the season’s produce than with light yet satisfying soups that will bring out the true flavour of fresh vegetables.

These green spears are in season right now. Look for a bundle containing slender spears (rather than thick and chunky ones) that are of equal width from base to tip (makes for more even cooking times). Their colour should be a vibrant green, and their tips should be tight and closed. To prep, bend to snap off the woody ends of the asparagus. A classic French asparagus soup is one of the best ways to highlight this vegetable, or if you’re in the mood for something even creamier, try this cream of asparagus soup recipe, which calls for heavy cream instead of milk.

Nowadays we can get spinach year round, but these tender leafy greens are at their prime in the spring. And don’t forget, spinach packs a powerful antioxidant punch. On a warm spring day, a refreshing and unexpected starter that’ll wow your guests (or just treat yourself to this delicious meal) is a cool soup such as this chillled spinach and chicken soup. Or if you want something a little spicier, this curried spinach soup will hit the spot.

These mellow onions are at their peak in the spring. Use only the white and pale green portions of the leek; the dark green tops are too tough to eat. To clean off the fine granules of dirt that can collect in between the layers., thinly slice then soak them in cold water. While you’re at it, swish them around in the water to help separate the layers. If your recipe calls for whole leeks, slice them lengthwise, and fan out the layers to rinse in between them. For a hearty dish, you can try a potato leek soup (the potatoes add more depth to it). For something more mild yet equally tasty, try this cauliflower leek soup.

It’s time for spring fruits and vegetables
What’s the healthiest oil to cook with?
Smoothie smarts: Make your smoothies healthier