You won’t miss out on flavour but you will save some pennies and have new textures and tastes to enjoy if you visit your butcher shop for these cheaper cuts. 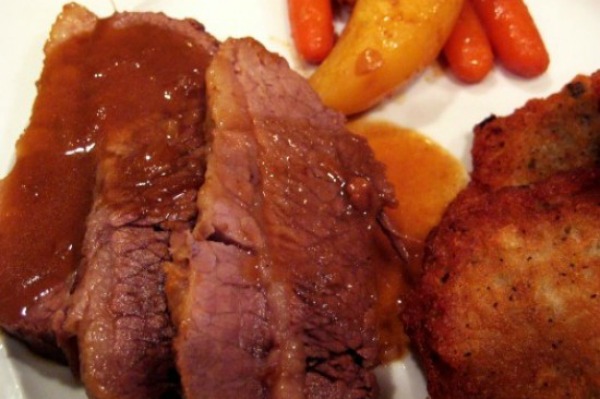 You don’t have to shell out the big bucks for fancy cuts of meat (filet mignon and such) if you’re looking for lots of flavour. There are plenty of inexpensive cuts of meat that’ll give you just as much flavour; the key is knowing what to do with them. Also, to find these cheaper cuts of meat, you may have to head out of your conventional grocery store; you’re more likely to find these cuts at a butcher shop (where they butcher whole sides of beef themselves) or perhaps at ethnic grocery stores (pork belly, for example, can usually be found in Chinatown).

Brisket is fibrous (it contains connective tissue) and fatty, and the key to making this cut more palatable is to cook it slowly over a long period of time. Smoking it over the BBQ or braising it will make it melt-in-your-mouth delicious.

This tender muscle of the round tip is lean, so you’ll want to cook it quickly or it’ll get tough. Sear it to give the outside some colour and seal the juices, and then finish it by roasting it in a low-temperature oven. Don’t let it overcook, though; sirloin tip is best served medium-rare, so don’t make it for a dinner party for people who enjoy their meat well done.

This cut is actually not from an ox, but from a cow or calf (veal). It is indeed, however, from the tail. To get maximum flavour out of oxtail, you’ll want to cook it over a long period of time: for example, braising it in red wine for a stew.

Like many of these inexpensive cuts of meat, short rib, too, is best cooked over a long period of time, so that it becomes ultra-tender, practically melting off the bone and tasting juicy and rich.

Interestingly, pork belly, along with many of the other inexpensive cuts of meat named here, are showing up on many menus in chic, upscale restaurants. This is not a cut for when you’re watching your fat intake, as it is from — you guessed it — the pig’s belly and has a thick layer of fat. If roasted, it can develop a tasty, irresistible crackling that’ll win over even the most squeamish diners.