Nothing’s worse than realizing you’re out of a crucial ingredient at the last minute. Here are some simple ways to keep your recipe on track.

When you’re baking, a missing ingredient can feel a lot like a lost cause, but it doesn’t have to be. It helps to think of baking as a chemistry experiment. You can easily rescue a recipe by using a substitution that has the same effect as the original would.

How many chocolate chip cookies have been lost due to the realization that you don’t have baking soda? It’s actually an easy fix. Baking soda is a leavening agent, which means it causes food to rise. Baking powder does the same thing, but you’ll need a little more of it, which can throw off the flavor, which is why you’ll want to reduce the amount of salt you use in the recipe.

Why is it that we always seem to have either baking powder or baking soda but never both at the same time? Not to worry — just make your own. Keep an emergency batch of the homemade stuff on hand, but remember to use the same ratios of it while cooking.

If you aren’t a big coffee drinker, then you might not have this on hand, but that’s not a deal breaker. You can cheat by using the butter to add fat to whole milk, which will give you the same result.

For leavening, 1 egg = 1/4 cup of carbonated water – 1/4 cup of liquid from the original recipe

For moisture, 1 egg = 1/4 cup of cooked fruit or vegetable puree

There are a lot of surprising ways to replace eggs in a recipe, but a lot depends on whether the eggs are used for moisture or for leavening. A good rule of thumb says that if a recipe calls for 3 or more eggs, then they are likely used for leavening.

Corn syrup is a sweetener, but if you’re trying to cut it out of your diet, then you might not have it on hand. It’s easy enough to make a simple syrup by combining water and sugar over a low flame until the sugar is dissolved. The result should be viscous, like regular corn syrup.

Believe it or not, brown sugar is not some mystical, magical sugar made from special cane. It’s actually just granulated sugar and a little molasses. “Dark” brown sugar has more molasses, while the “light” variety has less. You can make an easy substitute by adding molasses to sugar or just using sugar by itself. If you opt to just use white sugar, then you can expect a slightly different texture.

Self-rising flour is the key to great pancakes and ridiculously good biscuits, but if you don’t have it on hand, then it’s easy enough to make a batch of your own.

There’s a multitude of butter substitutes you can use to make a recipe a little more healthy, but if you’re just looking for something that will come close to the taste and texture of butter, then shortening or oil will be your best bet.

Who ever has sweetened condensed milk on hand? No one, that’s who, but at least it’s easy enough to whip up some of your own when you really need to make a cheesecake. 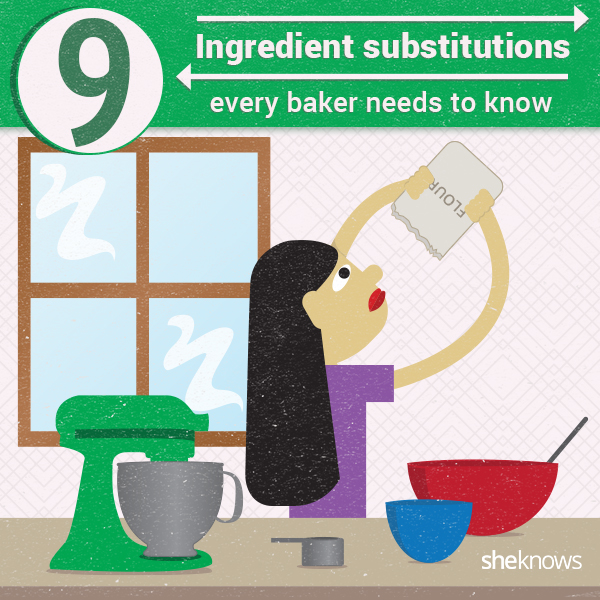 12 Hacks for incredibly healthy meals you can make in minutes
10 Healthy recipe substitutions
In a pickle: What to do if your’e out of eggs