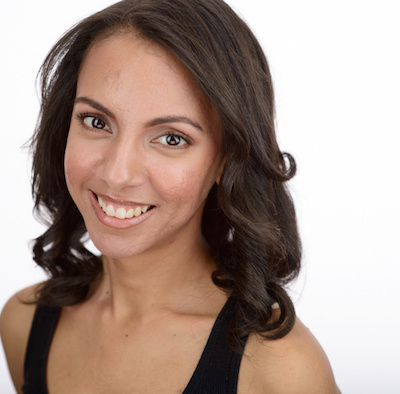 Cutting out milk based cheese doesn’t have to be the end. A few vegan brands are stepping up with healthier, delicious alternatives!

tDairy products, especially cheese, are staples of most of our lives. Things like mac ‘n’ cheese and string cheese sticks are go-tos for babies and stick with us as we grow up.

t Unfortunately modern cheese isn’t what it was hundreds of years ago when people were making it at home from their family cow. Today’s cheese is filled with fat, genetically modified fillers and other dangerous chemicals like hormones and pesticides. Dairy allergies are also linked to a wide range of health conditions ranging from earaches in kids to eczema and even chronic pain in people of all ages.

t More and more people are moving to milk alternatives like soy, rice or almond milk. But giving up our beloved cheese is a whole other ball game. The taste and texture is incredibly hard to replicate and you might think it’s not going to leave you feeling as satisfied.

t Initially that may be the case, because cheese lovers are actually experiencing addiction similar to that of a drug addict. But once you’ve cut out dairy entirely, feelings of addiction and withdrawal will fade.

t And luckily for us there are some killer dairy-free cheese alternatives out there that are changing the game. If you or someone in your family has an allergy or are looking to transition to a vegan diet, this list will help you know what cheeses are best and for what dishes to use them. 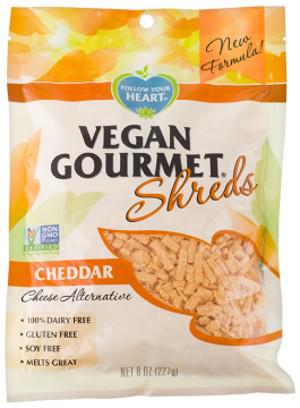 t I tried a bunch of different flavors from Follow Your Heart. Including block cheeses for sandwiches and shredded cheese for things like pizza and nachos.

t Does it contain GMOs? No, carries the coveted Non-GMO Project certification

t Does it melt? The slices didn’t really melt, but turned slightly soft and crisp at the edges. The shreds worked well on the stovetop for macaroni and cheese. On pizza it did melt without turning to liquid (something that used to be a trademark of vegan cheese). After it melted it didn’t have that stretchy, smooth cheese appearance needed to fool our dairy-eating friends.

t My favorite from the range was their Monterey Jack blocks which tasted really good “melted” (or more accurately, heated, because it didn’t really melt). Had a nice flavor. I wouldn’t recommend it for things like cold sandwiches though as there wasn’t much flavor unless warmed.

t Their shredded mozzarella was quite good on pizza and could probably fool a kid, if they could get past the fact that it doesn’t look melted. 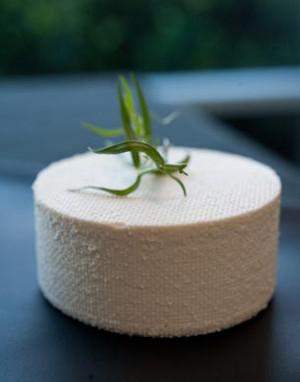 t Flavors include White Adler (tastes like brie), Classico (tastes sort of like feta) and truffle, dill and chive.

t Does it melt? No. Kite Hill cheese is nut-based and replicates the fancy, aged cheeses you’d spread on crackers or a baguette. It’s not meant to be used for things like pizza or mac ‘n’ cheese.

t I’m not sure I’ve ever had any substitute for an animal-based food that comes as close to matching the real thing as Kite Hill’s Brie replacement, White Adler. The phrase “game changer” is overused, but this stuff definitely is. It had the look, smell and texture of real Brie, complete with a firm rind on the outside. This stuff blew my mind! I couldn’t stop eating it. And while it didn’t melt at all, it did taste even more realistic when heated. Baked “Brie” will be happening at my house ASAP.

t Bonus points for their nut-based ricotta. If cottage cheese was a go-to for you in your dairy eating days… be prepared to shake and cry with joy. So, so good.

t The biggest downside to Kite Hill though is that it’s not yet widely distributed. They’re currently only in select Whole Foods locations. But if we all ask our local health food stores and Whole Foods to stock them, hopefully they’ll eventually rise to the demand. The world needs this cheese. 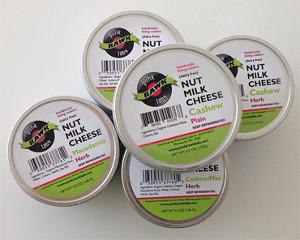 t Does it melt? No. Like Kite Hill it’s not meant to be used for nachos or pizza. But it’s a great spreadable cheese. Punk Rawk had the best spreading texture of all the brands I sampled. They also had the overall best presentation. Each cheese comes in its own reusable tin (bonus points for recycle-ablity). The cheese itself is shaped beautifully and wrapped in paper. Would make a great gift to bring to a party.

t Punk Rawk Labs cheeses were definitely up there on my list of favorites. The smoked flavor was crusted in pepper on the outside which gave it a major kick. Not for those that can’t handle some spice. The texture was really smooth and spreadable, again making it a great cheese for parties. 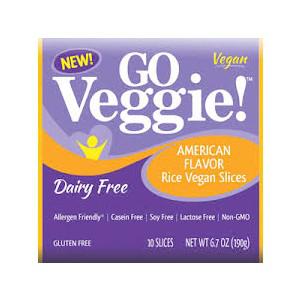 t I’d had Go Veggie! ages ago and didn’t love it. I was pleasantly surprised to see that this veteran brand has stepped up their game and now have one of the better faux cheeses on the market. FYI for vegans and people with allergies: Not all of their products are 100 percent vegan. Watch out for tricky ingredients like casein and whey.

t The vegan products I tried were pepper jack, American and cheddar slices along with Mexican and mozzarella shreds.

t The overall best in the Go Veggie! line for me was the pepper jack slices. In spite of a slightly oily texture, the flavor was spot on. It reminded me of pepper jack and Ritz sandwiches I’d make for myself as a kid. Just the right amount of spice. I highly recommend.

t The other two slices, American and cheddar, were both good as well although none of the slices melted well. I’d also rank it as the most kid-friendly of the cheeses I tried. The American flavor tasted just like Kraft slices that we’re used to. The cheddar flavor sort of tasted like Cheese Whiz, but was still good and kids would enjoy.

t The Go Veggie! shredded flavors melted very well on both pizza and nachos. It was a tad watery when first coming out of the oven, but set up a bit after a few minutes. You definitely wouldn’t want to eat the shreds cold on, say, a taco salad or something, as the un-melted texture was weird and chalky.

t Does it melt? Yes, but it was a little bit liquidy. 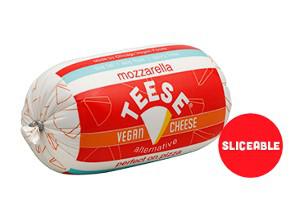 t Teese failed in appearance department, it didn’t look or feel real (it also comes in a shelf-stable wrapper). I’m not sure if they’re still making it, but Chicago Vegan Foods used to sell their own line of mozzarella sticks, which were too die for. Foods like this are where Teese is best used. It wasn’t particularly impressive on the pizza or spreadability front.

t Where Teese did shine was on macaroni and cheese. The meltability, the color and the texture made it a strong contender for a dairy-free cheese that your kids will enjoy and not know that it didn’t come from that little blue box. I did need to add a bit of salt to it, to really bring out the flavor, but the texture was perfect.

t Does it melt? Yes, but it didn’t spread out the way you’d expect melted cheese to, so it’s not one that will fool people on pizza. The Mozzarella didn’t really taste like much on a pizza… but I guess real mozzarella isn’t that flavorful anyway. 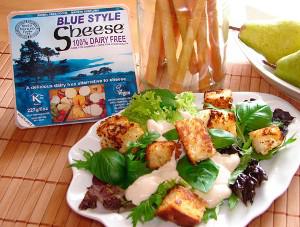 t Sheese is based in Scotland and has a massive range of block cheese flavors as well as cream cheeses. 6-plus flavors in each category.

t Where they shined the most was with their “smoked cheddar” flavor which was, overall, one of the most realistic-tasting cheeses I tried. Definitely a great choice for anyone that loved a good “hard” cheddar in their pre-dairy free days. The mozzarella also melted well, but I think it’s a better fit for things like a panini or grilled cheese sandwich than pizza. While some of their flavors had a weird aftertaste, overall I was very impressed with their diversity of flavors and realness of the smoked cheddar.

t Honorable mention to their blue cheese flavor which smelled and tasted very real, but lacked the hint of blue color and therefore wouldn’t really fool anyone into thinking it was real cheese.

t Does it melt? Yes

t Best shredded cheese: Tie between Go Veggie and Follow Your Heart. For pizza and nachos I got the overall most realistic flavor and mouth feel when I combined them.

t These were my favorites after an exhaustive taste test (i.e. all I ate for two weeks was vegan cheese). What are your favorite dairy-free cheeses?