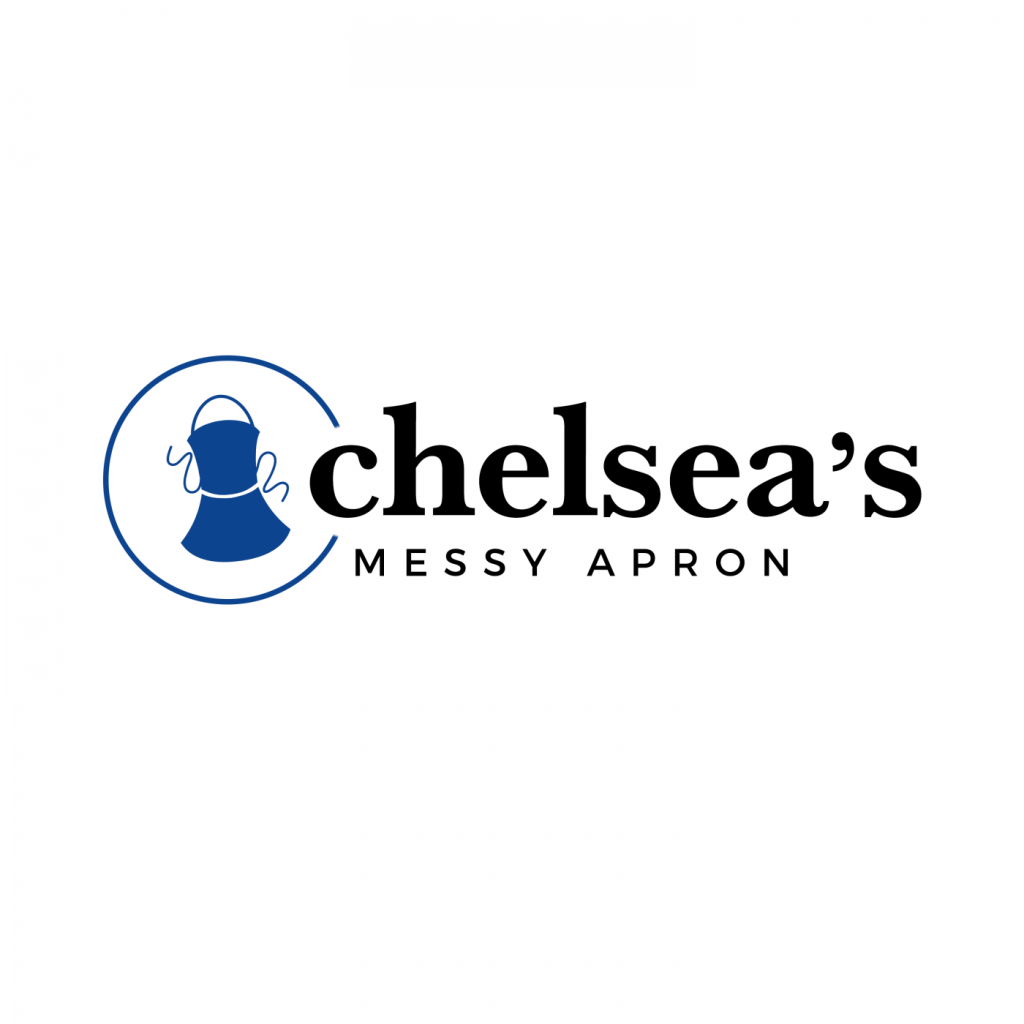 This fully loaded breakfast burger combines all the best breakfast ingredients around. Take one bite, and you’ll be in food nirvana.

It’s the ultimate breakfast burger, with a runny-egg-filled sausage patty, plenty of cheese, hash browns and bacon. To top it all off, it’s served on a bagel bun. I don’t think it’s missing a single breakfast favorite.

I keep calling this a breakfast sandwich, but really, it is so good it could go for any meal of the day. It’s very filling and packed with plenty of protein thanks to the sausage, eggs and bacon. So let’s get to talking about how to make this awesome sandwich. 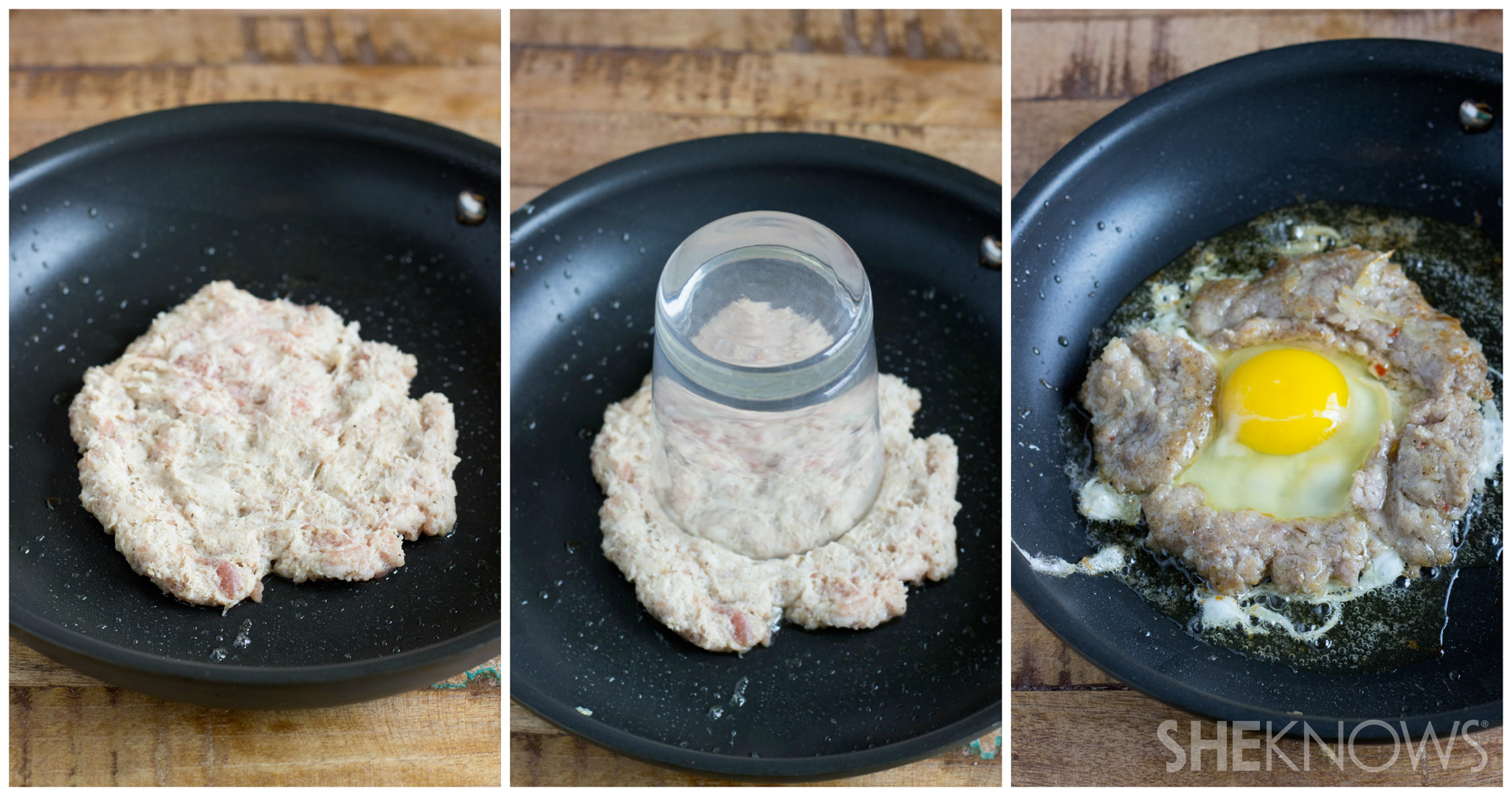 It all starts with a sausage patty. I used ground sausage that also had pork mixed in. Remove the sausage from the package, and form it into a very large patty. Spray your skillet with nonstick cooking spray, and place the patty into the skillet.

Using a glass, press into and remove the center of the patty. Reserve the center for another sandwich or a different meal. Next, cook the bottom of the sausage patty for about 2 to 3 minutes on medium heat.

Next, crack a large egg into the center hole you made in the sausage patty. Watch the deliciousness happen. Cook for another 1 to 2 minutes, and then flip the patty and cook the other side until the egg is cooked through to your desired preference. 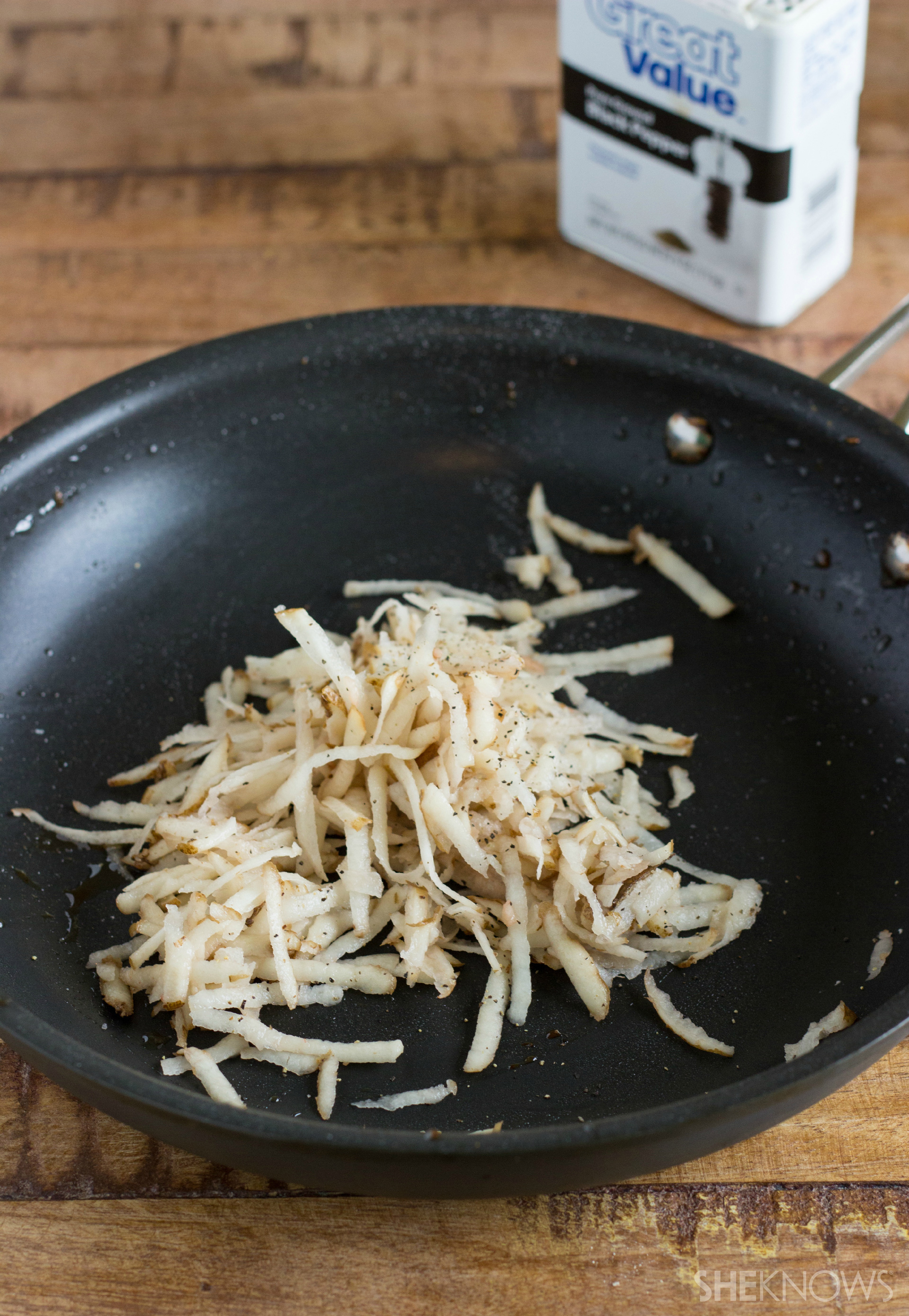 Grate a small potato, and cook it in a skillet with some salt and pepper and a tiny bit of vegetable oil. Once the hash browns are cooked through, throw in some shredded cheese, let it melt, and set aside.

Use the same skillet to cook bacon if desired on this breakfast sandwich. And now that everything is cooked, it’s time to assemble the delicious sandwich. 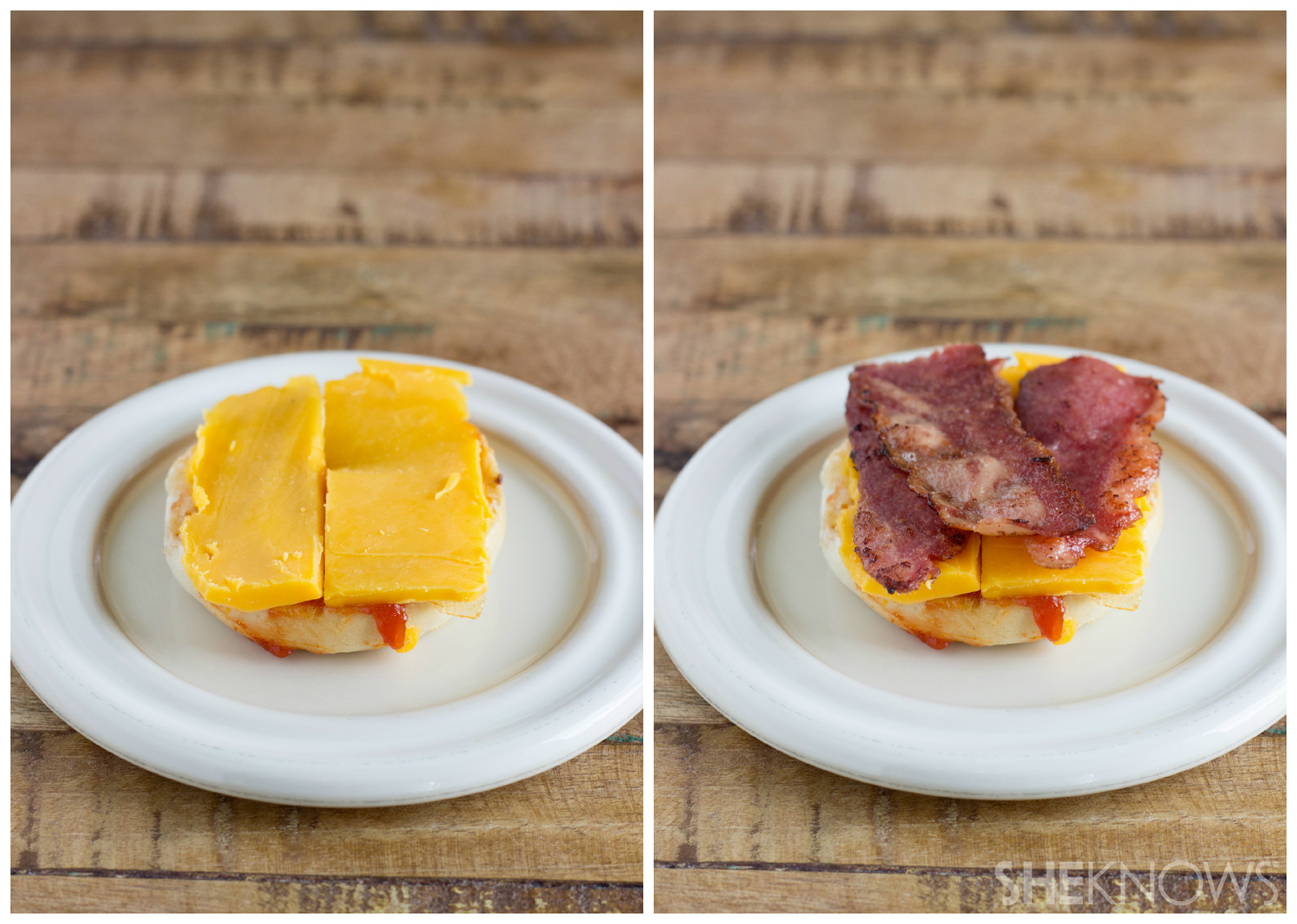 Cut open a bagel, and add some ketchup to the bottom half. Then layer with some very thick cheese slices and the bacon, if using. The cooked sausage-and-egg patty goes right on top of that.

Finally, top with the cheesy shredded hash browns and the other half of the bagel. 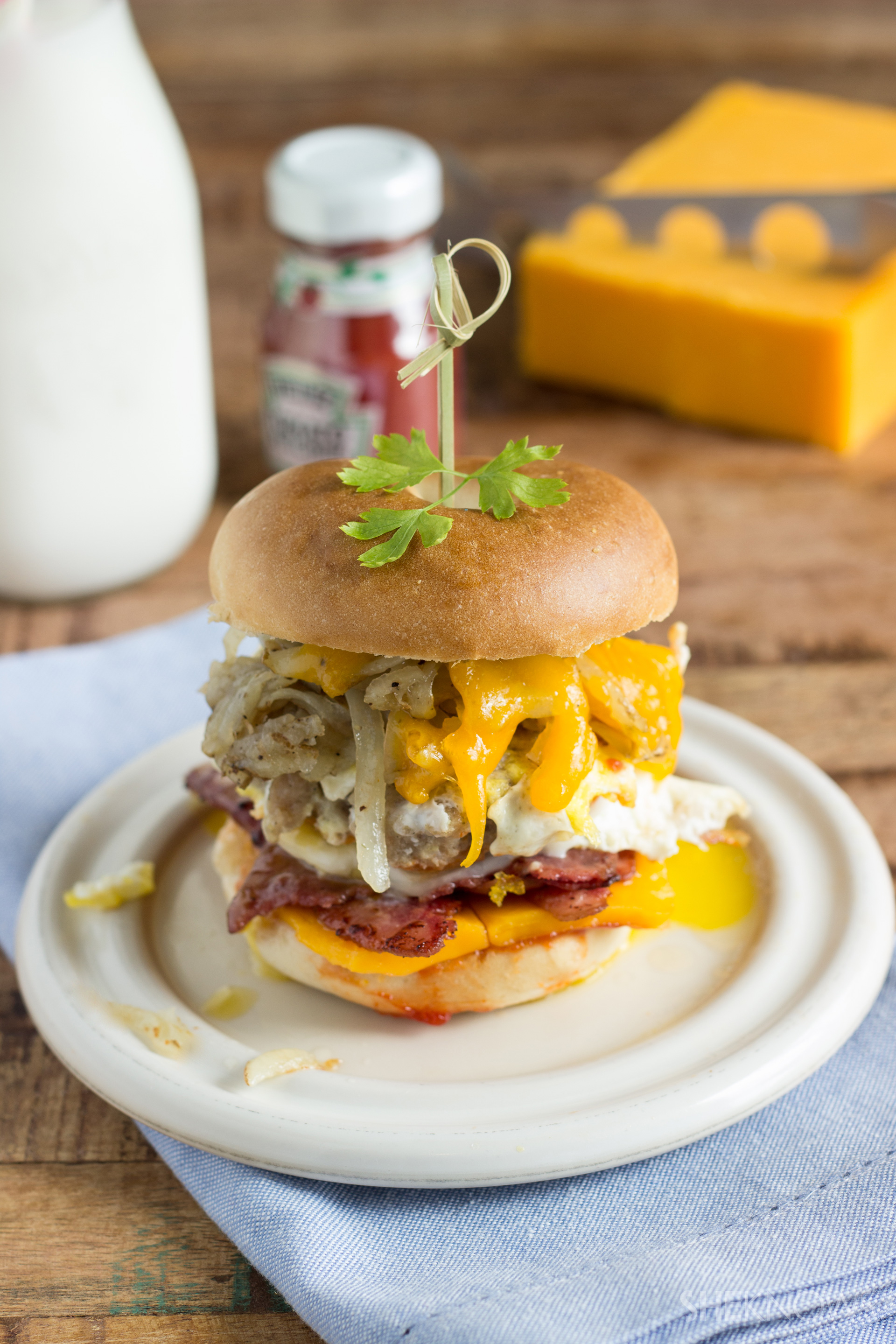