Despite editors and publishers, sometimes recipes get put into cookbooks, and then days, months and years later, we all wonder why. Here are some recipes from actual published cookbooks (and in one case, an entire cookbook) we thought deserved mention as some of the most bizarre.

Cookbooks are great ways to take deep dives into the culinary world. No matter your foodie passion — whether it’s the cuisine of a certain country, vegetarian food, raw meals or exploring offal — there’s a cookbook for you. However, not every cookbook is a perfect work of art, and sometimes recipes make it into their pages that kind of make you wonder.

Sometimes these recipes are just an acquired taste, sometimes they’re there for show, and sometimes you really do wonder who in the world thought they’d be a good idea. No matter how they ended up in the cookbook, only a select few can be called the most bizarre recipes that actually got into a cookbook. 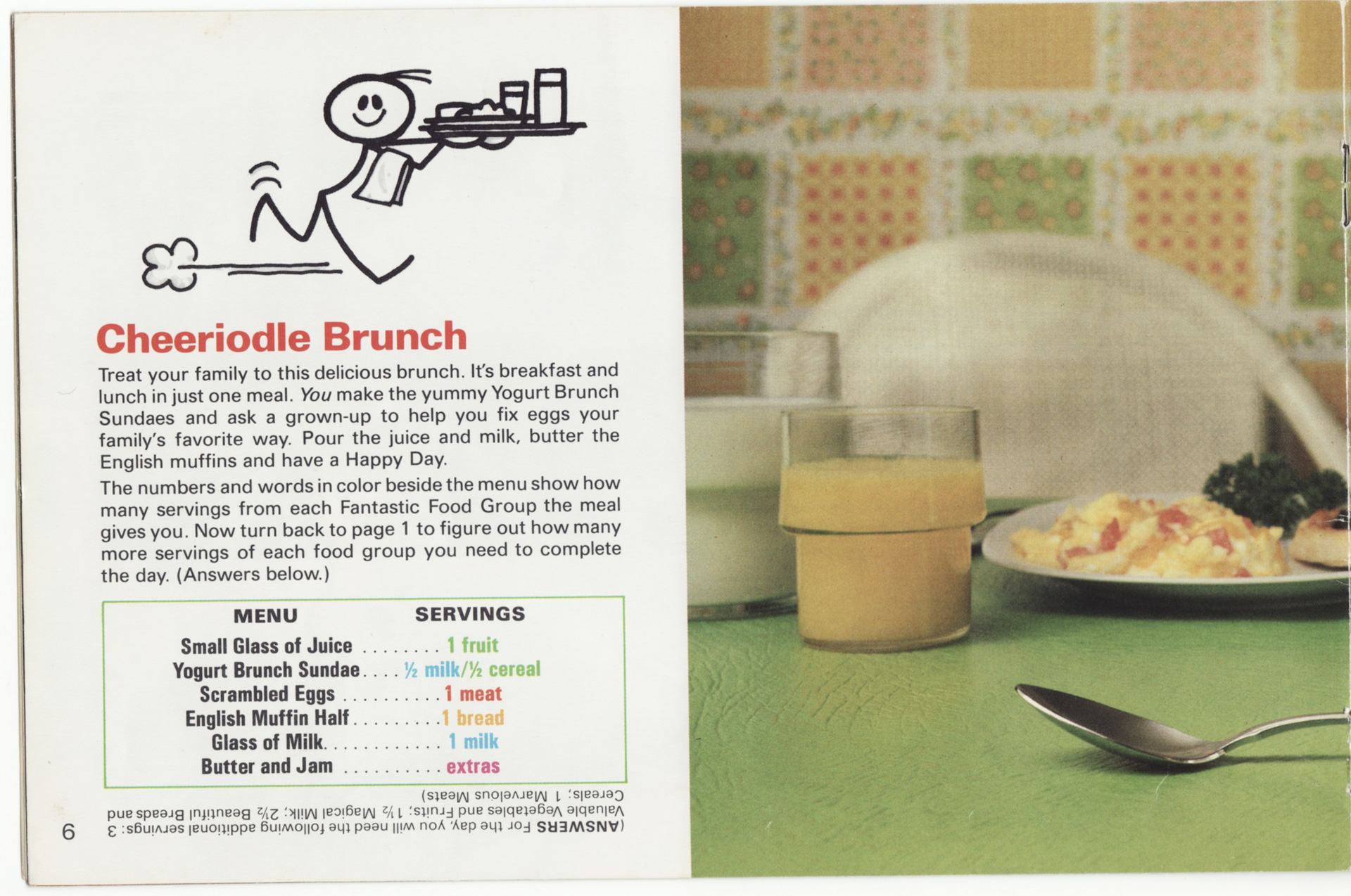 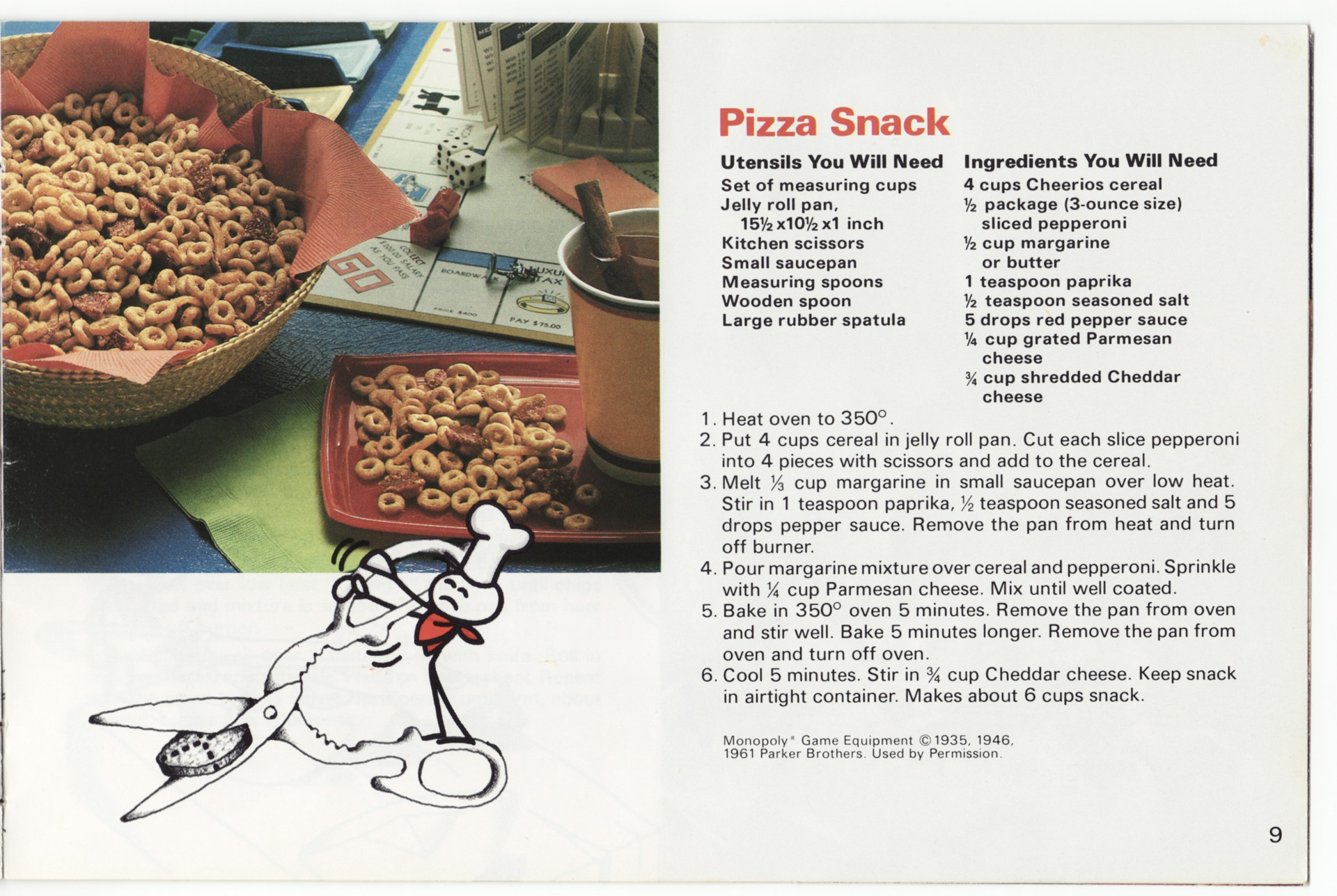 On one hand, we feel bad for picking on a cookbook obviously aimed at children. On the other hand, the Cheeriodle Brunch? A bunch of processed foods and some scrambled eggs? Or the pizza snack consisting of (amongst other things) Cheerios, cheese, spices and red pepper sauce? I know this was the 1980s, but we couldn’t have taught our kids a little better eating than that?

2. Who doesn’t love cocktails made from Marmite? 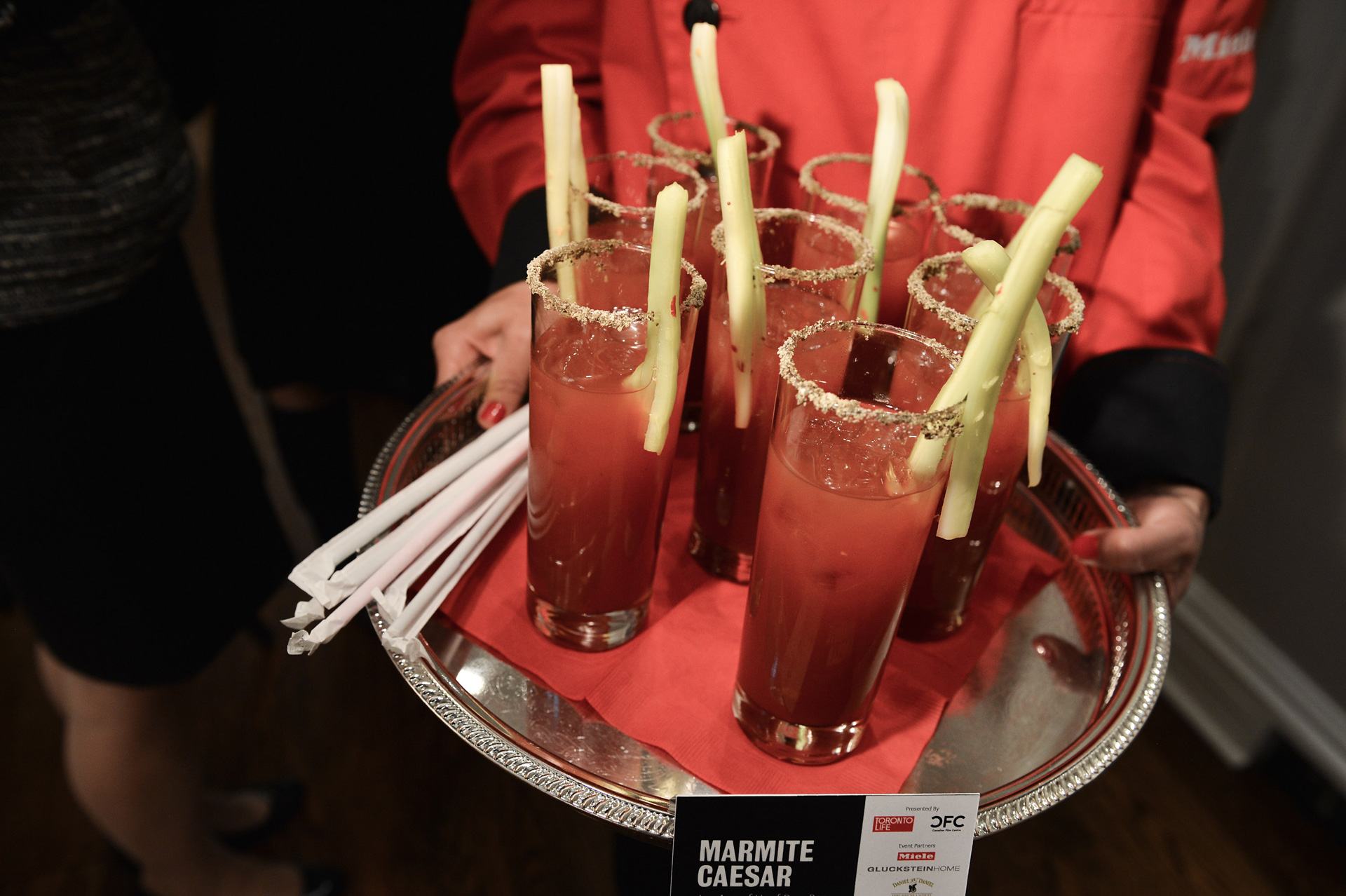 OK, first, that’s not a typo. The Toronto Life Cookbook is featuring a Marmite Caesar cocktail, which is a lovely blend of Marmite, spicy vodka, Worcestershire sauce, flavorings and a celery stick to fool you into thinking it’s a bloody mary. It remains to be seen just how popular a cocktail made from yeast extract spread (aka Marmite) is going to be. Our hope is, not very. 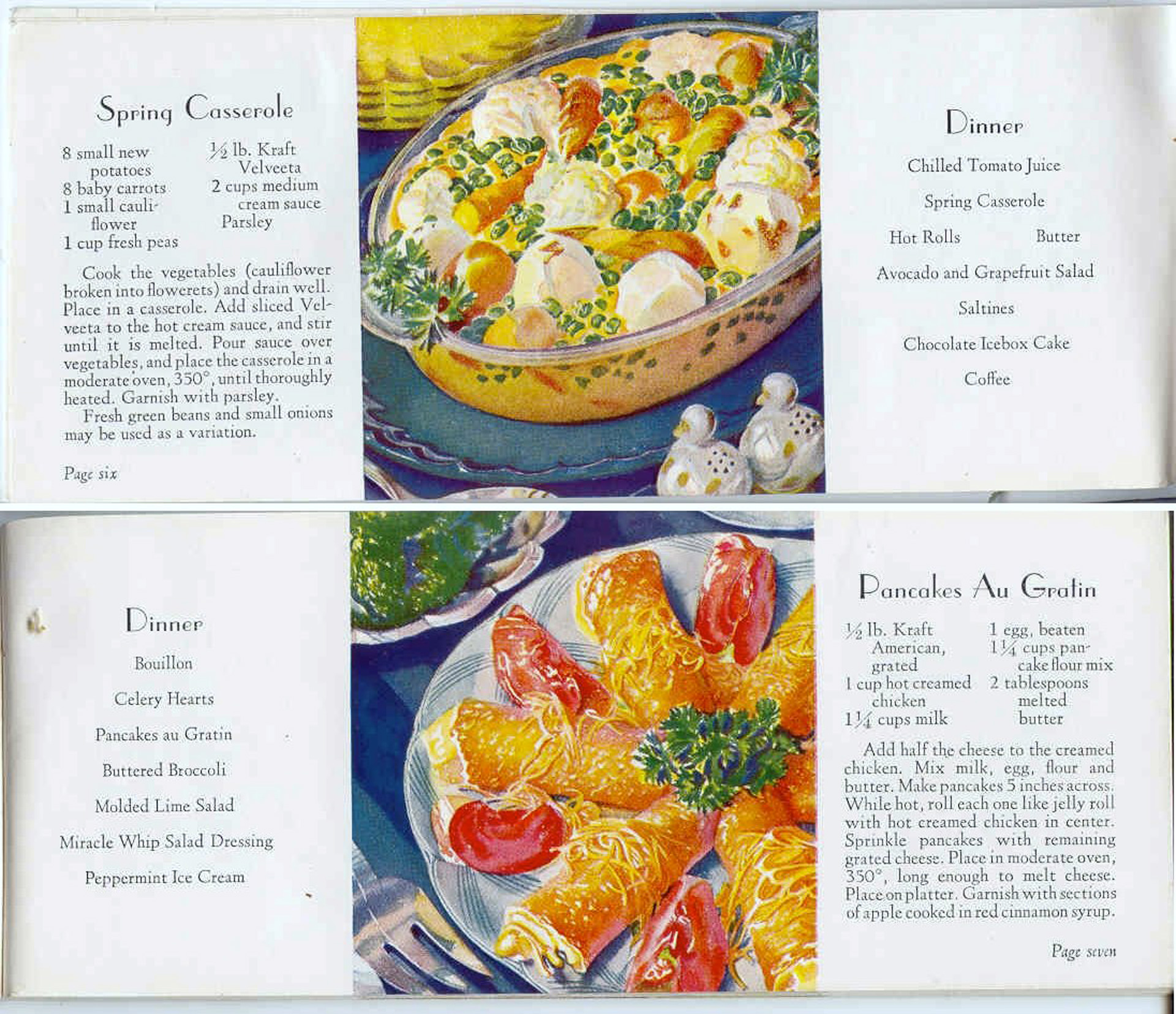 Filed under H for “huh?” Pancakes au gratin are a lovely mix of pancake-mix pancakes and creamed chicken that gets topped with Kraft cheddar cheese (because Cracker Barrel’s version ain’t cutting it) and then baked. At some level, this feels like maybe it’s just a different take on enchiladas, until the cart goes off the rails in the last section, in which we’re instructed to serve this dish with apples cooked in cinnamon syrup. If only Gordon Ramsay could see this…

4. Only Imperial troops are so delicious 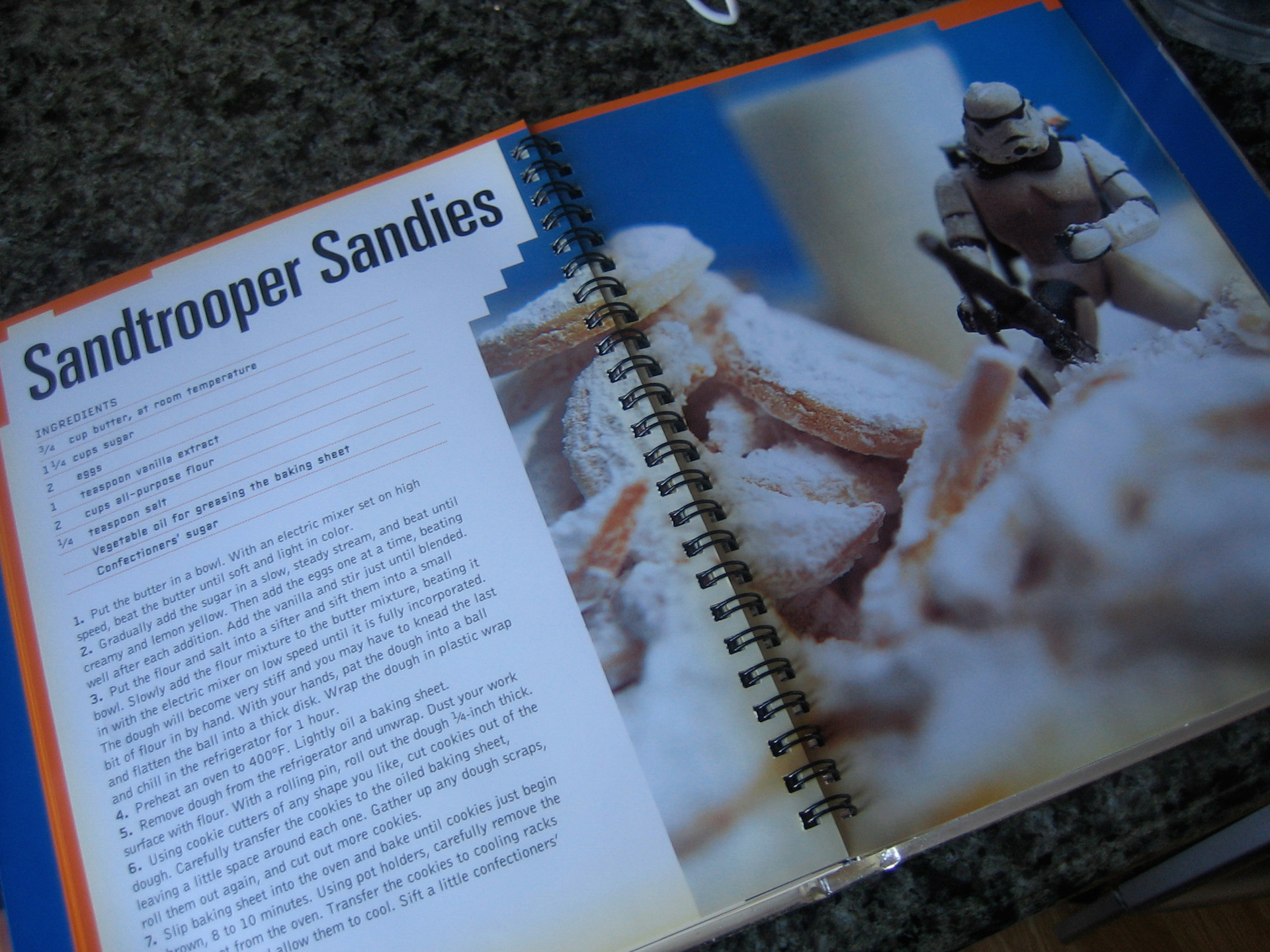 OK, we get it. Name some dishes after Star Wars characters, and kids and nerdy dads will flock to buy the book in droves. Still, Sandtrooper Sandies? Wookie Cookies? We’re just not feeling these recipe titles from a movie that was famous for blue milk, Beru stew and Jabba eating live frogs. 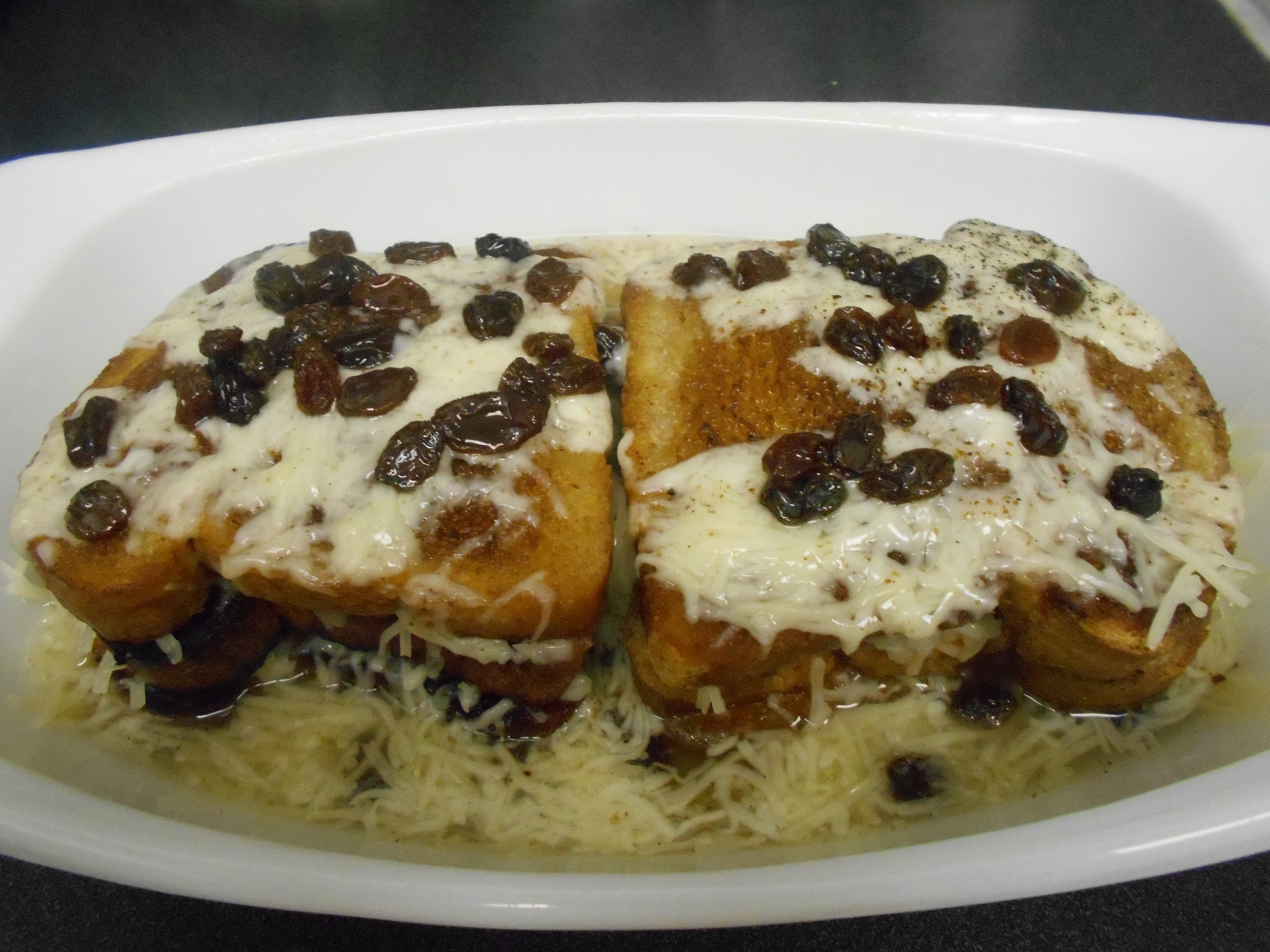 The Dead Celebrity Cookbook offers us the capirotada, a Mexican bread pudding-like dish that mixes cinnamon, nutmeg and other spices with aged cheese and, in some cases, meat. Then it is topped with raisins. This dish is probably OK without the meat, though aged cheese and what is essentially pumpkin pie spice feels a little strange. However, it’s really the oily, greasy mess at the bottom that makes us think twice about this dish.

Photo credit: Thoth God of Knowledge via Flickr, CC BY 2.0

We know that when we’re craving meat, we bypass the perfect flame-kissed, savory flavors of a Brazilian barbecue and go right for canned-looking chili topped with hot dog halves. The cheese topping in the middle really seals the deal.

7. One of Granny’s recipes you won’t be passing on 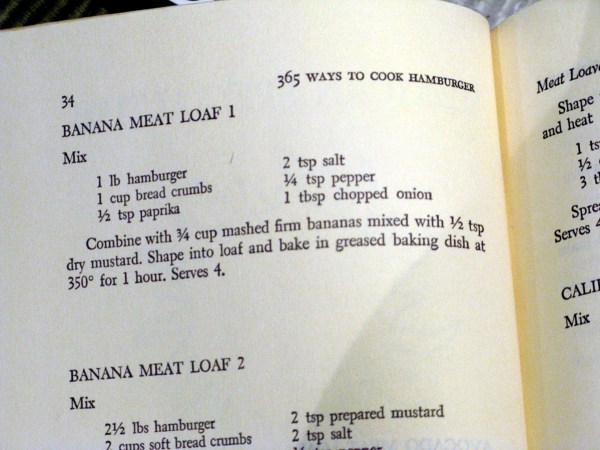 One must respect the attempt to find a way to cook hamburger every day of the year (well, except in leap years). Most people, when confronted with this dilemma, might stop after day four: tacos, meatloaf, meatballs, hamburgers… uh… tacos? Still, meatloaf with banana puree? Two ways? Strange how neither recipe seems to mention bananas in the ingredients. 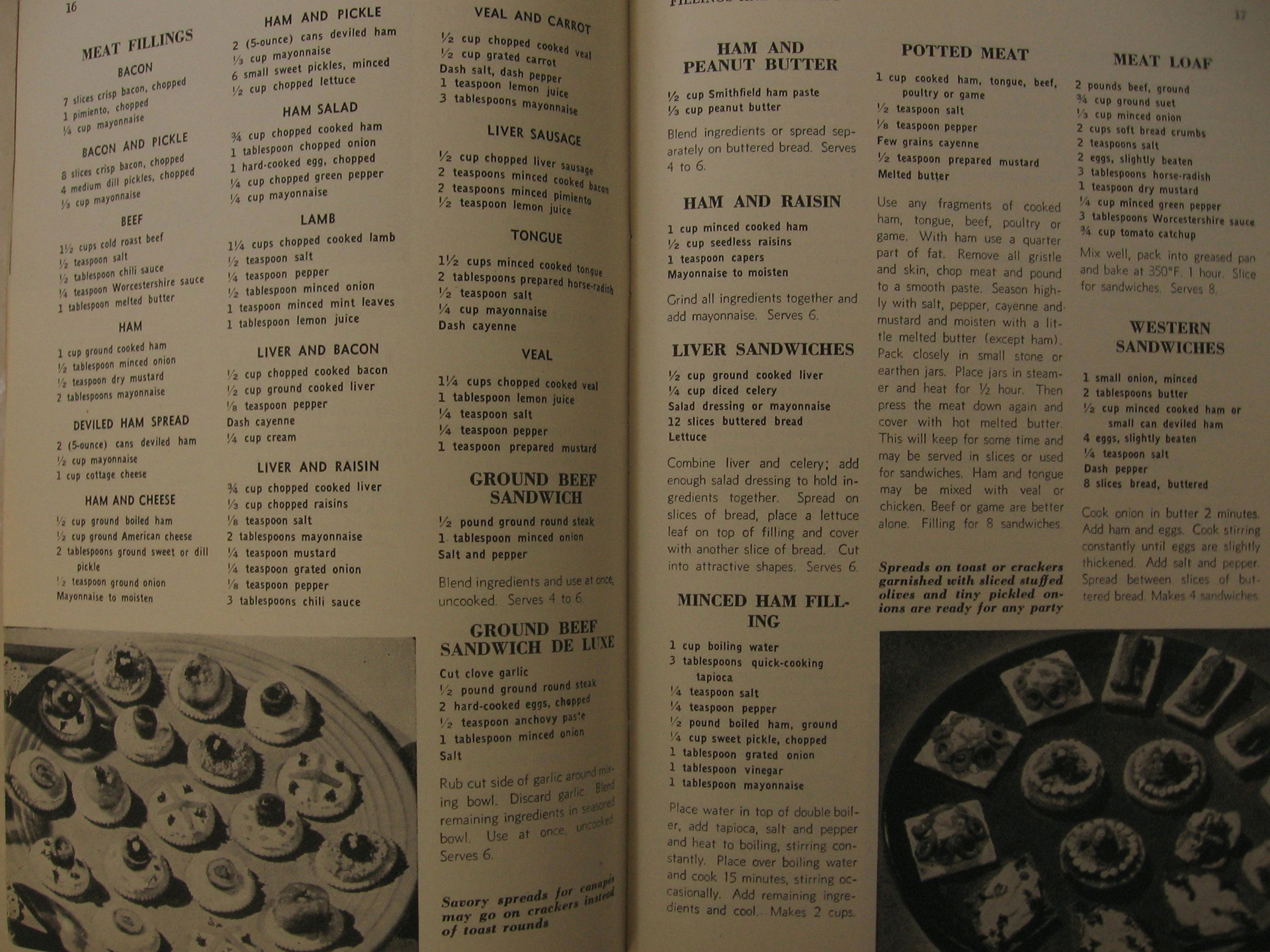 In this excerpt from a cookbook clearly devoted to meat, we find a multitude of things we don’t want to try. This leads us to believe that perhaps meat-based cookbooks aren’t the best investment. But perhaps you disagree and want to try making your own potted meat or ham paste and peanut butter.

9. Sometimes it’s not just one recipe that deserves our attention 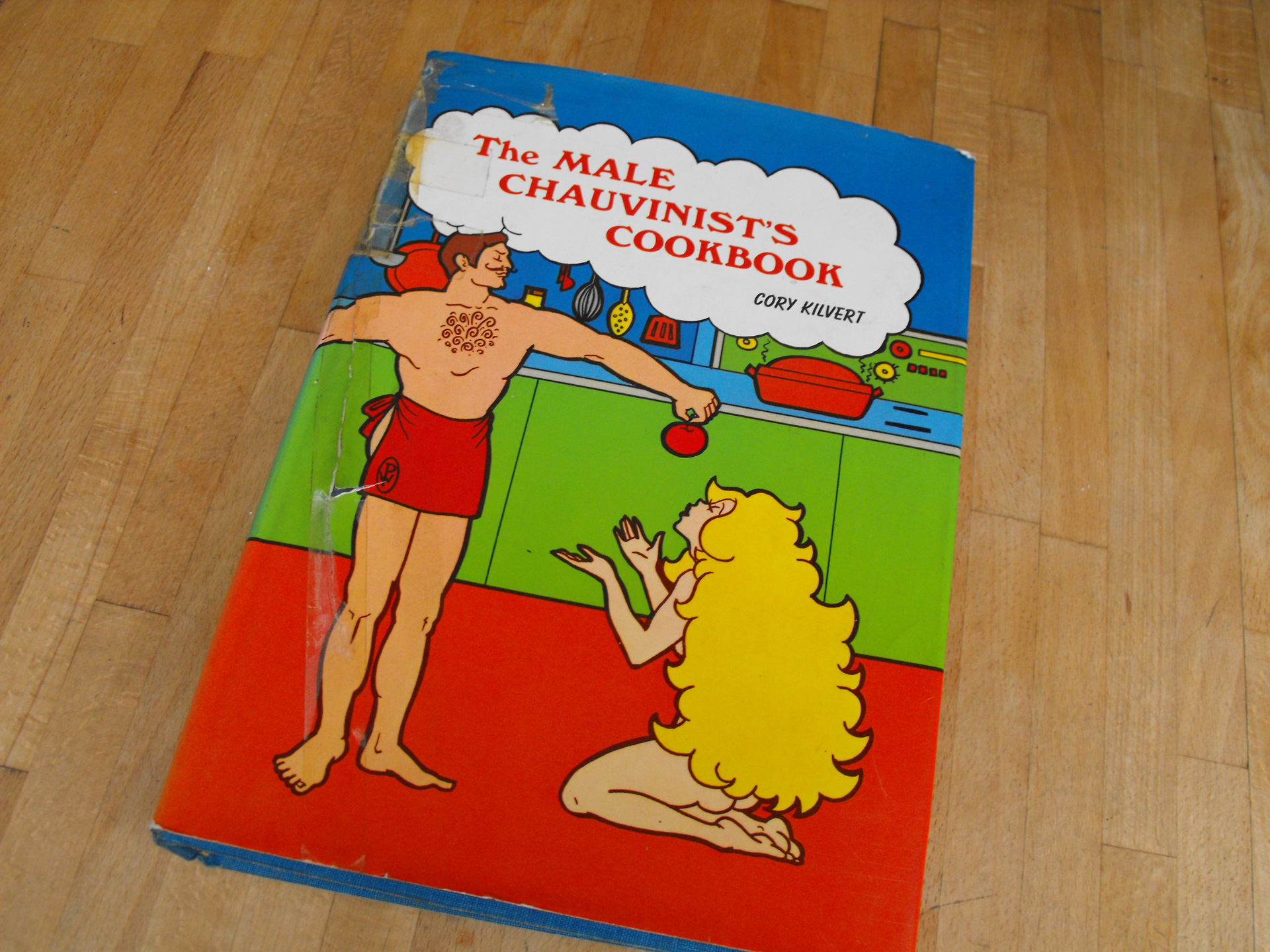 Yes, occasionally an entire cookbook comes along that makes us wonder. (Though in fairness, this one is satire.) 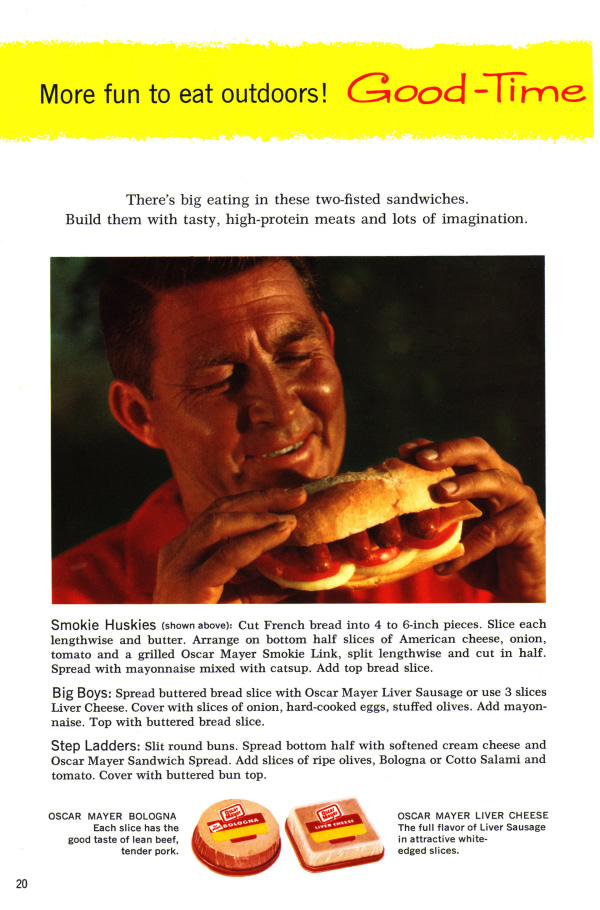 You know, in addition to meat cookbooks, brand-specific cookbooks seem to be a bit suspect, though it’s possible we’re in the wrong, and a sandwich with buttered bread and Oscar Mayer Liver Sausage (or Liver Cheese) really does sound amazing. Yeah, we didn’t think so.