If you’re going to eat a raw food meal, chances are you’ll be eating something that’s uncooked, unprocessed and organic. Whether you practice a raw food diet or just want to see what the fuss is about, here’s a list of the best raw food restaurants in the country. 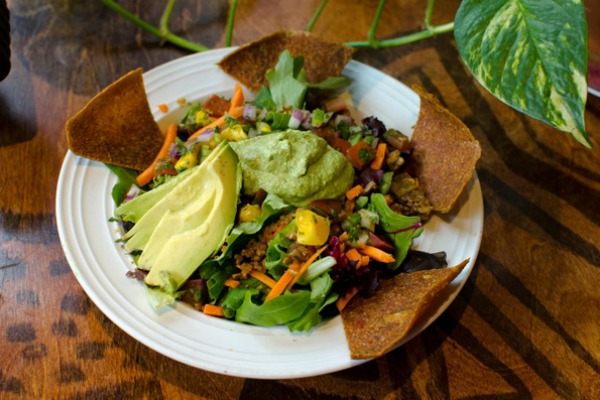 While there are different types of raw diets (raw vegan, raw vegetarian, raw animal), the fundamental premise stays the same. Raw diets include the diet of uncooked foods, or cooked at less than 115 degrees F. The most-common restaurants feature a raw vegan menu that consists mainly of unprocessed, raw plant foods. Raw foodies believe that foods cooked above 115 degrees F lost their nutritional value and are not as healthy — maybe even harmful — to the body. They believe that heating foods destroys natural enzymes found in living foods and leaves behind toxins.

Cooking a raw food diet takes a lot of time, effort and money. Why not treat yourself with some of the best raw restaurants around the country instead?

If you’re ever in the vicinity, these are some of the the best raw restaurants to try out.

Tassili’s Raw Reality in Atlanta, Georgia, opened in 2011 by master raw food chef Tassili Ma’at. Embracing a low-key and less-formal environment, the restaurant is set up like a traditional deli, allowing patrons to eat in or take out. Chef Ma’at likes to create menu items by taking colors, shapes and cuts of particular foods into consideration. Her approach to food is simple and pure: “Prepare food that a person can eat to live, not eat to die.” A must-try are the variety of “wrawps” it serves.

One of the world’s leading raw food chefs, Matthew Kenney, opened up M.A.K.E. Santa Monica. This living-foods restaurant features a plant-based cuisine with a menu inspired by seasonal and local produce. M.A.K.E. lets you pick the atmosphere you wish to dine in: a communal omakase-style bar so you can watch the chefs prepare food, indoors amidst natural wood accents or outside where a full-service patio lets you take advantage of the fresh weather. Other restaurants by Matthew Kenney include The White Lotus Miami and Tamazul OKC (Oklahoma City).

Christopher Slawson took location into consideration when he decided to open his living-foods restaurant Christopher’s Kitchen in Palm Beach Gardens, Florida. Chef Slawson is one of the most-respected organic, plant-based chefs, and his CK brand is growing to include a juice cleanse, retail goods and various handmade desserts. Each organic and nutrient-rich menu item is handcrafted by the chef himself. Try the famed “Mac N Cheese” made from quinoa pasta, cashew cheese and Brazil nut parmesan. Yum!

While Christopher’s Kitchen is a bit more in the upscale department, Darbster is a little bit more under the radar. The first West Palm Beach, Florida, location is a hidden gem located along a water bank and covered by trees. Though it’s not strictly raw vegan, most menu items are, and all menu items cater to vegetarians. Sure, it’s hidden, but its popularity is not. A second location opened just last year in Boca Raton, Florida.

In Chicago, Illinois, Karyn’s Bistro is a staple in the community. Karyn Calabrese brings her love of fruits, grains, veggies and sprouts to the table using only organic ingredients whenever possible. Menu items are high in fiber and low in fat, an ideal combination for easy digestion. Karyn’s enterprise also features events you can attend to learn about the benefits of a raw foods diet and how to prepare certain foods. The establishment also puts together a menu of foods for the current week, available for pickup for breakfast, lunch and dinner.

Chaco Canyon is considered Washington state’s first certified organic vegetarian café and restaurant. With two locations in Seattle, Chaco Canyon’s mission is “to provide a delicious organic sustenance for a wide variety of needs and individual tastes.” This is the first café in the area to feature a daily raw foods menu composted of nuts, seeds and organic produce. The menu changes with the seasons, and the café also features a large vegan menu as well.

New York City welcomed its first upscale raw vegan restaurant in the summer of 2004, and it’s been growing in popularity ever since. Pure Food and Wine in Union Square boasts a menu full of seasonal raw dishes that are entirely plant based. It features a wine list that’s biodynamic, organic or simple sustainable, and its sake cocktails are made using organic sake mixed with organic and fresh juices. If you cannot decide what menu item to try, consider a five-course chef’s tasting menu… and try it all!

Do you frequently dine at a raw foods restaurant? If so, tell us about it.

Aldi Is Selling Two New Sandwich-Inspired Dips, & Commenters Have Excellent Ideas About How To Use Them