Learn about the science of baking, specifically the types of leavening agents we use in our kitchens. 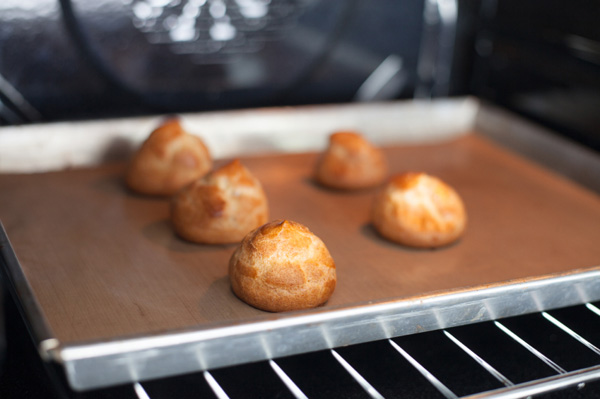 Some baked goods count on a big burst of steam to get the rise they need. For example, pate a choux, used to make profiteroles, are baked at a high temperature for the first 10 minutes in the oven, making them “puff” due to the quick steam production.

Although the first breads were flat, like tortillas and naan bread, wild yeast was captured and later used in “bread mash” to ferment bread doughs. This method is still used today, as some bakers would rather use the wild and local yeast around them then store-bought yeast. Known as a sourdough starter now, this bread mash has become the “mother” to bakers around the world. By allowing wild yeast to ferment flour and water, you obtain a mixture that can now be the base of all your breads. Some bread bakers are even known to preserve this “mother” by freezing or drying parts of it for re-activation decades later!

What is fermentation? Fermentation is the process in which yeast cells break down sugar for energy. To aid the fermentation of your yeast, and, therefore, your dough, you need to consider dough temperature (very hot or very cold temperatures will kill your yeast), amount of salt (salt is a dough retarder, meaning if there is too much salt, the dough will take longer to ferment), amount of sugar (sugar is what yeast feeds off) and amount of yeast (too little yeast and your dough ferments slowly).

Baking soda, or bicarbonate of soda, decomposes to form carbon dioxide that produces leavening. But to produce enough leavening, you’d need a lot of baking soda. Thus, this is usually combined with an acid such as buttermilk, yogurt, brown sugar or vinegar to balance out the flavors. Too much baking soda leaves a strong chemical flavor in baked foods.

Baking powders are all made up of the same ingredients: baking soda, an acid and a dried starch or filler. Typically used in leavening of cakes, it results in a tender crust.

Sources: How Baking Works: Exploring the Fundamentals of Baking Science by Paula Figoni, On Food and Cooking: The Science and Lore of the Kitchen by Harold McGee