Today we’re tackling the wide variety of sweeteners in the market as well as sharing some recipes to inspire you in the kitchen. Whether you’re baking a cake or a sweet bread, you’ll need some kind of sugar to sweeten the deal! 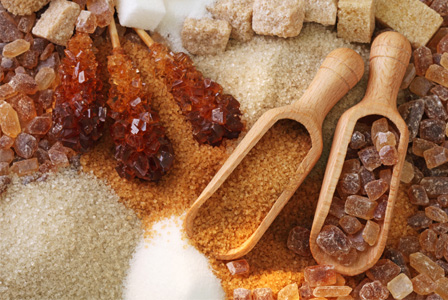 Sweeteners come in all shapes and colors, aiding in your baking by adding that hint of sweetness along with contributing a few other functions in our kitchen. Sweeteners:

We’ve divided the sweeteners in two main categories: dry crystalline sugars and syrups. There are some specialty sweeteners that deserve a mention at the end of this article.

Granulated sugar can be purified from either sugarcane or sugar beets and is typically 99.9 percent pure sucrose. Sugar is processed by first milling it and then refining it, resulting in today’s regular crystalline sugars.

Powdered sugar is also called confectioners’ sugar and is simply granulated sugar that’s been refining and pulverized to a fine powder. It comes in different degrees of fineness and is typically used in topping of baked goods. This type of sugar also contains about 3 percent cornstarch to avoid clumping.

Honey, which some call the original and first sweetener in the world, is the nectar of flowers collected by bees. It’s used in baked goods for its unique flavor. It is named depending on the flowers it comes from, such as rose hip honey or clover honey.

Get the recipe: Crepes with Brie, walnuts & honey >>

Molasses is the concentrated juice of sugarcane and the base from which rum is made. Its dark color and caramel flavor are a hit in baked goods.

Maple syrup, the thick delicious liquid we love over pancakes, is made by extracting the sap of the sugar maple tree and boiling it until most of the liquid evaporates, leaving behind a thick, luscious syrup. And it’s going to take lots of sap to make your syrup! It takes about 40 gallons of tree sap to make 1 gallon!

Agave syrup, mostly known because it’s from the same plant as tequila, is made from the core of the agave tree. We’re seeing more and more use of this syrup in healthier baking, since some companies keep the processing of agave to a minimum, making it a better-for-you sweetener.

This article would be a mile long if we listed every single sweetener, but we also wanted to mention these specialty sweeteners found in baking. These include stevia, date sugar, coconut sugar and pearl sugar.

Sources: How Baking Works: Exploring the Fundamentals of Baking Science
by Paula Figoni, On Food and Cooking: The Science and Lore of the Kitchen by Harold McGee