If you want to serve a little brew during your Thanksgiving festivities, we’ve got your cheat sheet for the best seasonal beers to serve with every course. 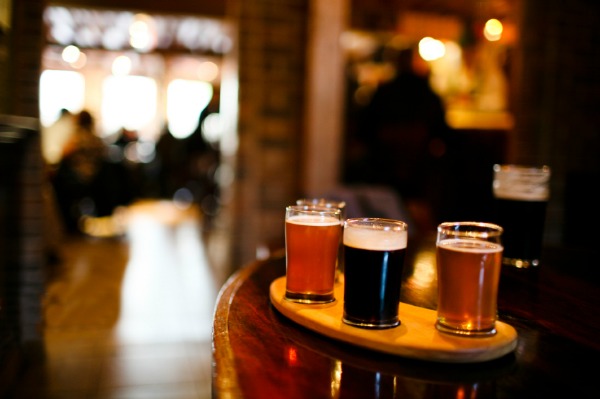 Most Thanksgiving meals are served family-style instead of in courses. Pairing beer properly typically requires course-style serving for optimum pairing results. If you just can’t see your way around family-style, don’t worry.

You can invest in beer tasting glasses and serve a taster size of each beer with the meal. Real taster glasses can be quite an investment, though they’re worth it if you plan to do this often. But you can buy plastic taster glasses online. You just need glasses that hold 4 or 5 ounces — enough for each guest to have a taster of each recommended brew.

An apéritif is an alcoholic beverage served before a meal with the purpose of stimulating the appetite. Traditionally, it’s served with a light snack, like crudités, though we don’t recommend that for Thanksgiving unless guests will arrive much earlier before you’re done cooking.

The best apéritif beers are those with a bit of bitterness, which is effective at stimulating the appetite. There are a lot of beer types that fit this bill, but stay away from the fruity beers and lambics during Thanksgiving (though they’re great any other time of year). You want something that will complement the aromas wafting from the kitchen, so we recommend a Czech or German pilsner or Belgian tripel. Try Reality Czeck by Moonlight Brewing Company, Prima Pils by Victory Brewing Company or La Fin Du Monde by Unibroue.

If you’re serving salad before the meal, you can make your life easier by sticking with a moderately priced Belgian tripel. It can do double-duty as the apéritif, moving your guests nicely into a salad when they’re about halfway done.

The beer you pair with turkey depends on how you roast your bird. For a traditional roasted preparation, go with an amber or malty brown ale or a porter. This is a good time to break out your favorite Oktoberfest, too. Try Brooklyn Brown Ale or 1554 Enlightened Black Ale from New Belgium Brewing.

If it’s going to be smoked or fried, go with something hoppy in a brown or Scotch ale. A porter works well here, too. Try Sierra Nevada’s Tumbler Brown Ale, Robert the Bruce Scottish Ale from Three Floyd’s Brewing Company or Smoked Porter by Stone Brewing Company.

If you’re one of those rebels who goes with ham on Thanksgiving (we’re not judging), you’ll want a wiezen or wiezenbock. Some people also like those with dubbels or dark lagers. We like Weihenstephaner Vitus by Bayerische Staatsbrauerei Weihenstephan, Optimator by Spaten-Franziskaner Beer or (for something more pronounceable) good old Sam Adams original.

The pairing for stuffings and dressings depends on what type of dressing you make, but since mashed potatoes go with a lot, anything you choose for that will go with the mashers, too. In general, Sam Adam’s Little White Rye, with sage flavors, is a fun pairing if you’re a fan of rye beers.

Sausage stuffing — We like sausage stuffings with dark lagers or American ales. Arrogant Bastard Ale is delish, but warn your guests that this beer earned its moniker. For a more drinkable selection, try Great Lakes’ Eliot Ness.

In general, many desserts pair well with porters and coffee- or chocolate-flavored stouts. You can also opt for a sweet beer. Any of these choices will complement a good many desserts. If you’d like something more specific for your Thanksgiving favorites, we’ve got you covered there, too.