Just in time for Thanksgiving — our guide to perfect, delicious and oh-so-fluffy mashed potatoes! 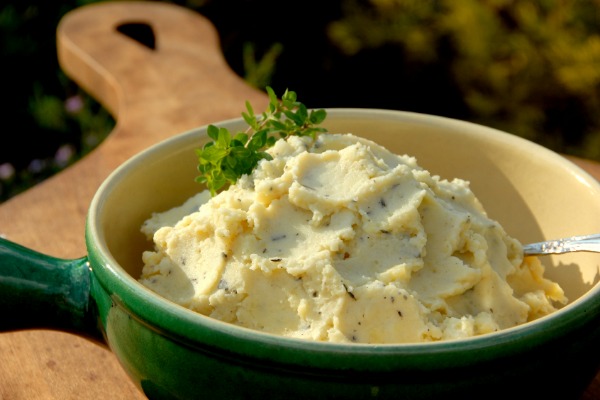 Though the worst batch of mashed potatoes I ever made came from a box (gross, I know), the second-to-worst batch was gummy, sticky and rubbery. They tasted OK — but when it comes to truly enjoying food, presentation matters. That’s why we’re letting you in on a few secrets to avoiding rubbery, gooey mashed potatoes — and it’s right in time for Thanksgiving!

Mashed potatoes can turn out like glue for a number of different reasons. For one, you may have overbeaten them. Potatoes that have been beaten too much turn into a sticky, gooey paste because the starch in potatoes has been released. You also may have overcooked them (can you see how sensitive potatoes are?). Overcooking them makes them extra-soft and extra-easy to overbeat, again making them rubbery.

Choose a potato that’s naturally low in starch, such as red bliss. Russet potatoes are most commonly used in making mashed potatoes, but they actually contain the highest amount of starch when compared with other potatoes. Though the starches can create a fluffier version of mashed potatoes, if yours always tend to turn out rubbery, give a different type of potato a try!

Tip: If you are using russet potatoes, never overbeat them. Russet potatoes will give you the fluffiest potatoes but they’re also the easiest to mess up!

Use a hand mixer. We already told you that the primary reason for rubbery mashed potatoes is overworking them. To avoid being too rough on your potatoes, use a hand mixer instead of an electric one. Electric mixers are powerful and oftentimes too harsh for certain foods, like potatoes.

Dry the potatoes completely. Once the potatoes are done cooking in boiling water, make sure to dry them completely before mixing or adding other liquids. Let them sit in the colander for a few minutes to drain the excess water. Also, don’t cut the potatoes into small chunks before boiling. Though they may cook faster, they will likely absorb too much water and leave you with a rubbery end result.

Avoid food processors. It may seem easier — especially if you’re trying to cook multiple dishes in the preparation of Thanksgiving dinner — but food processors are just too harsh on potatoes and will never give you the fluffiness you’re looking for. Take the time to mash them by hand with a potato masher or ricer.