If you’re unhappy with the quality of your pies, we’ve got holiday baking tips for you. We’ll give you the lowdown on making the best pies this side of the North Pole! 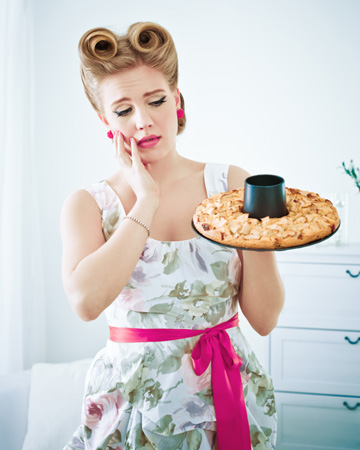 If you’ve taken to purchasing holiday pies because yours never turn out quite the way Mom’s did, we’ll show you why your pies suck.

If your bottom crust is soggy and you’re sure you followed the directions properly, your oven may not heat evenly or the temperature gauge may be off. Try baking it on the bottom rack to ensure it’s cooked all the way through. You should also avoid putting it on top of a baking sheet. It may be easier to remove it from the oven, but it also insulates the bottom of the pie plate.

If you already did bake it on the bottom rack and weren’t using a baking sheet, try adding a half teaspoon of baking powder for each cup of flour. (If it’s a meringue pie, see the weeping meringue entry, too.)

If you’re pie crust dough is cracking, you may be under- or over-developing the gluten. Sometimes, it just takes trial and error to know when it’s right. In general, you should only mix the wet ingredients in until just mixed and you see no traces of dry ingredients. Then stop. If it seems dry during kneading, you can add a tablespoon of cold water.

You can also try using half butter and half shortening. The real key is to ensure it’s properly moistened before you put it in the fridge to rest.

If you’re having issues with the rest of the pie cooking, a pie crust that’s too pale could be a sign that your oven temperature is too low. Remember, baking times and temps can be affected by local weather and altitude. Generally, though, you can just brush the crust with a bit of beaten egg or milk.

If your crust contains vinegar or lemon juice, often used to add tenderness, they could cause this, too. Try adding a teaspoon of sugar and pinch of salt to the flour before adding any fat.

Prebaked crust is shrunken and misshapen

When you fit the crust to the plate, don’t pull or stretch it. Then let it rest in the refrigerator again after it’s fitted. And don’t forget to use a fork to poke holes in the bottom crust and sides to let the steam escape, rather than forcing the dough to expand.

If your crust gets too brown, try tenting it with aluminum foil for the first part of baking. Just leave the tent in place until the time left on your bake is about what it would be for a prebaked crust.

Pecan pies tend to bubble up and sometimes even get a bulge in the center if you incorporate air into the sugar mixture. Try gently folding the ingredients together without the pecans until they’re just mixed. The pecans can add to the incorporation of air. Then spread the pecans out over the unbaked crust and pour the sugary mixture over top. The pecans will rise, so you’ll be left with a pecan pie that looks just like you mixed the pecans in.

Pumpkin and other custard pies cracked

Just as with pecan pies, you have to be gentle mixing custard pie filling. If the oven is too hot or you let it go too long, it will crack. Don’t let it puff in the center. Instead, it should be just underset in the center.

Precook your fruit filling if your pie is too runny. Just take a little over half of it and bring it to a boil, simmering the mixture for about a minute if it’s thickened with cornstarch or tapioca and three minutes if it uses flour. Then just stir the rest of the fruit in before adding it to the pie crust.