The fruity concoction known as cider has experienced a revival in recent years. We like these artisanal ciders, often made by smaller breweries, for their creative flavors and high quality.

Related story Reddit Is Livid at This Woman's Family for Trying to Bring Alcohol Into Her Sober Home
Join the cider revolution! 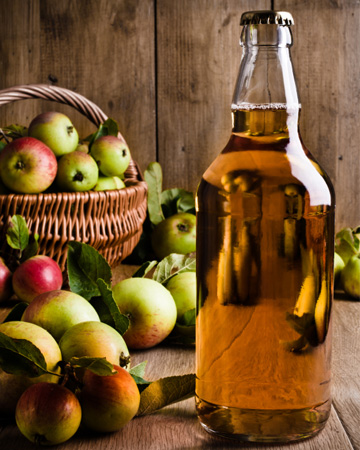 Everyone likes to party up when the temperature goes down, but we don’t all like lagers and ales. There’s no need for a signature cocktail or the “nostalgic” wine cooler to get your adult beverage refreshment on.

These artisanal ciders will let you celebrate without the bitter flavor of beer.

Whetstone Ciderworks in Marlboro, Vermont, has released its yearly lineup, and the Whetstone Reserve is the leader of this pack. Similar in flavor to a sauvignon blanc, this cider has a crisp, clean, fruity flavor that pairs well with lean pork, seafood and chicken. Since it doesn’t have to be well chilled to be at optimal flavor, you can keep the bottles in ice at a party for easy access.

Smackintosh from Tandem Ciders in Michigan is exactly what it sounds like — a sweet and tart apple-flavored jewel of a cider brewed from the apples of local growers in small batches to preserve the best each apple has to offer.

Crispin brews a refined cider that isn’t as styled as the traditional sweet beer alternative. The Saint is no exception to their “not sweet and sticky” rule. If you’re a cider skeptic, Crispin challenges you to prepare to be converted. Fermented with Belgian Trappist beer yeasts and a blend of fresh-pressed apple juice, The Saint has a naturally sweet, floral (and very beer-like) bouquet with hints of yeast and herbal complexity on the back end.

Bushwacker knows that the barrel is the key to a great cider. The newest addition to their barrel collection is the Sequoia, which is aged in barrels with a Big Bottom history. They held white port for over a year, were then filled with Big Bottom Whiskey, then emptied and filled with Sequoia to age for five months.

Woodchuck asked cinnamon to take a hike and opted instead for another spicy complement for their private reserve cider — ginger! As strange as it may sound, ginger works well with apple. This unique cider is easy to drink with a slight kick.

Gotta love the Scottish and their wonderfully playful use of language! This aptly named cider is immediately flavorful, but finishes with the sweetness you’d expect of an apple cider.

Left Food Charley in Traverse City, Michigan, is an urban winery with one eye on the orchard and the other on the latest trends. That trend includes artisanal ciders, and their Cinnamon Girl Hard Cider couldn’t be more on point. It’s aged with Korjinte and Vietnamese cinnamon with just a hint of carbonation to give it a flavor reminiscent of Grandma’s apple pie.