These shows aren’t for amateurs! We’ve rounded up the best shows on television for foodies like us! 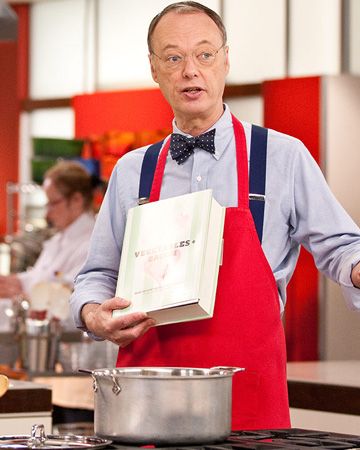 Love television? Love to cook (or, um, eat)? I’ll be the first to admit that both of these are passions of mine (the television and eating part, at least!). If you’re like me and have an indescribable love of food and television, you won’t want to miss these hot shows for foodies!

Currently in its 13th season, America’s Test Kitchen is the most popular cooking show on public television. The show features a theme for each episode and shares two to three recipes you can make in your own home. Host Christopher Kimball opens each show with common cooking problems and how to tackle them. A must-see show for those who love to cook!

A show all about world culture and cuisine, Anthony Bourdain: No Reservations first aired on the Travel Channel back in 2005. Though the series ended in November 2012, you can still catch reruns or watch it from the beginning on Amazon Prime.

Speaking of Anthony Bourdain, his newest show — The Taste — is based on NBC’s hit, The Voice. Bourdain, along with Nigella Lawson, Ludo Lefebvre and Brian Malarkey, judges contestants (ranging from home cooks to professional chefs) based on a tasting of their food, only it’s done blindly!

Originally debuting in 2010, Fox’s MasterChef just finished its fourth season and signed on for two more. We love this show because it’s relatable — there are no professional chefs here, just amateurs competing against each other for the title of MasterChef. Judged by Gordon Ramsay, Joe Bastianich, and Graham Elliot, the show is not one to miss!

Already finished with its eighth season, Food Network’s Cupcake Wars doesn’t appear to be going anywhere any time soon. Contestants create cupcakes based on a theme and are judged by three judges — including the founder of Sprinkles Cupcakes, Candace Nelson.

Giada at Home stars celebrity chef Giada De Laurentiis as she welcomes you into her home for memorable food and fun! If you love entertaining and are constantly on the lookout for unique and exciting recipes, this show’s for you! Tune in Saturdays at 11:30 a.m.!

Travel Channel’s Bizarre Foods with Andrew Zimmern (currently Bizarre Foods America) combines travel and cuisine in a hit show focusing on what American’s consider to be “bizarre” food. In each episode, Zimmern focuses on the cuisine of a specific region — discussing everything from how they get their food to how it’s served to how it’s eaten. He also willingly samples all these exotic foods with a smile on his face.

What’s your favorite cooking show? Share in the comments below!

Cookbook review: The Veggie-Lover’s Sriracha Cookbook
How to cook — well! — on a budget
6 Tips to cook like a chef and look like a model