Reality TV stars can be a breed unto themselves, but somehow they seem to get worse when those reality TV participants are cooks and chefs. Throw in a few hundred thousand dollars and some real characters crawl out of the woodwork. But who are the worst, the meanest, the cruelest and the silliest?

Related story 10 Australian food blogs you should be following 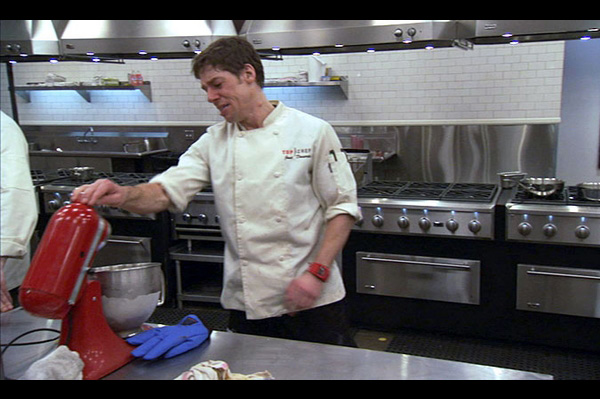 Food competition shows have given us some real doozies, but who are the worst contestants ever?

Every reality show has that contestant you love to hate. That one person who producers and editors know that all of America, young and old, Republican and Democrat, can join together and truly, completely dislike. However, even among the elite of reality TV repulsiveness, 10 food contestants stand above and beyond as the worst food contestants ever.

Davidi was ruthless, beautiful and arrogant — a trifecta of perfection on a reality show — during her stint as a finalist on the Food Network’s The Next Food Network Star. While she was a fearsome competitor with excellent culinary chops, she was also mean and said things in the confessional booth that were downright ugly, especially about perky contestant Kelsie. Still, her die-hard attitude resonated with some (including the judges), while others cautioned that she would need to soften a bit. Ultimately, her me-first attitude was cut from the show in the later stages of the competition.

Ken Lee has the honor of being the first chef ever eliminated from an episode of Top Chef. He was the unlucky chef-testant to be cut during Episode 1 of Season 1 and saw the axe for many reasons. His fellow chefs found him brash and cocky, he fought with several of the show’s judges and chef Thomas Keller had to throw him out of the kitchen for tasting a sauce with his finger instead of a spoon. All in all, it was an impressively memorable performance even though it was cut very, very short.

Nate Appleman makes the list for his deeds in The Next Iron Chef Season 2 and not, strangely enough, for his later appearance in The Next Iron Chef: Redemption. During Season 2, Appleman was mostly liked by his fellow contestants, despite his arrogance, his inability to be a team player and the sheer volume of time he spent in the confessional talking about just how precisely he planned to screw over everyone else. While reality food television is a competition, Appleman appeared to have little honor during Season 2. When he came back in Redemption, though, he seemed an older, wiser chef. He was still a little jerky, but seemed to accept the idea that there might be something called “fair play.”

Tali, a competitor in MasterChef Season 3, seems like the kind of guy you’d want to meet for drinks, except for one small thing: He can do no wrong… at least in his own mind. Tali was constantly criticizing the palate and food chops of MasterChef judges Gordon Ramsay, Graham Elliot and Joe Bastianich while they repeatedly informed him that he could not cook. His flavor combinations were bizarre, and he constantly overreached on his dishes. In doing so, he squandered away a chance to learn from three great minds and was way too smarmy while he did it. His exit from the show was not a surprise.

Andrew’s occupation was listed as “farmer” in Hell’s Kitchen Season 7, though he also gleefully talked about butchering his own meat in one rather creepy confessional. Andrew wasn’t eliminated from the competition. Rather, he left on his own after being tossed from the kitchen. Jean-Philippe Susilovic came after him, trying to talk him into staying by saying many wanted to be in his shoes. Forster responded by tossing his shoes at J.P. and storming off. Rumor has it that the producers of the show found Forster to be so off-balance after his exit, he was not allowed to stay sequestered with the losing chefs and was, instead, sent home.

If it were only for his smug, know-it-all attitude, Top Chef Season 2’s Marcel probably wouldn’t make the cut. Even though his level of jerk was bad enough that his fellow contestants tried to hold him down and shave his head, there are lots of smarmy reality food contestants. No, Marcel makes this list because he tried to rap gangsta style. His lyrics were anything other than hardcore and just made the chef look ridiculous.

Russell, the Dallas bad boy, made it all the way to the very end of Hell’s Kitchen Season 8 before finally losing to Nona Sivley in the finals. Throughout the show, Russell was rude and arrogant to his fellow contestants and to guest judges. During the course of the show, he made several dubious threats against the other competitors, including threats of physical violence. Also, after losing in the finale, he blamed his team and vowed to do everything in his power to ensure that the cooks on his team during the finale would never work again. Some of the last words on the show were him warning the chefs on his team to never show up in Dallas or he and his friends would assault them. Classy.

Cliff competed on Top Chef Season 2 and is the only chef in Top Chef history to be thrown off for assaulting another chef-testant. Cliff made it to the final five, only to decide (along with his other contestants) to give Marcel (who no one liked) a forced shaving. Fortunately for the rest of the chefs, only Cliff actually grabbed and held Marcel down, which resulted in him being thrown out and the rest of the competitors getting to stay. If that weren’t bad enough, head judge Tom Colicchio wanted to end the show right there and give the win to Marcel because no one came to his aid as he cried for help. Ultimately, Cliff paid the price and ended his time on the show by saying there were no hard feelings, even though he had been the aggressor.

Krissi of MasterChef Season 4 makes for wonderful television: She has a chip on her shoulder, likes to yell, has clear phobias, and will throw down with anyone who crosses her. She also genuinely appears to be a bad person, taking great offense from others who display any hint of happiness and picking fights with anyone with the thinnest provocation. Even worse, she seemed to derive justification for some of her anti-social behavior from her child, who she just “wanted to make proud.” In all of reality television, there has never been a more selfish, self-centered, poorly-behaved contestant. Fortunately, she was all talk and never had to go to prison for beating her fellow home cooks, no matter how often she said she would.

Seth was by far and away the most bizarre competitor in Top Chef or Top Chef: Just Desserts history. Initially, he looked strong with a Week 1 win. However, he quickly started to unravel. He became angry and began snapping at his fellow chef-testants, even when they were trying to help. Then, strange hives began appearing all over his body followed by a breakdown in front of guest judge Elizabeth Faulkner in which he lay on the floor and cried that he wanted to make his mother proud. Ultimately, it wasn’t his baking that got Seth removed, it was a fight with a production assistant over paper cups which then lead to an ambulance rushing him to a hospital over a medical condition. He was not cleared to compete again, thereby ending his curious Top Chef: Just Desserts career.