We rounded up some of the spookiest food and drinks that restaurants across the U.S. are serving up this Halloween. 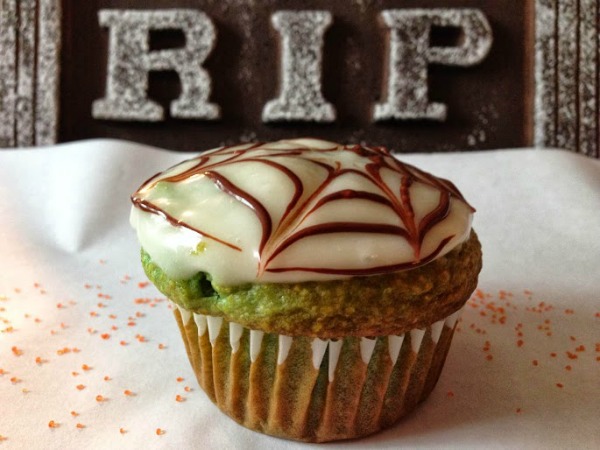 Online bakery Waltzing Matilda’s Bakery NYC has cooked up something special for Halloween — kale cupcakes! Complete with spider web icing, this bright green treat is made with kale, but tastes like a spice cake and is 100 percent vegan. Although Waltzing Matilda’s does not have a brick-and-mortar location, they deliver to Brooklyn, Queens, the Bronx and throughout Manhattan. Shipping is also available throughout the U.S.

The beverage team at Marina Kitchen Restaurant & Bar is out for blood. Well not really… but they’ve created a special Halloween cocktail called “The 13th Floor” that bears an eerie resemblance to the favorite drink of vampires everywhere. The recipe is a mixture of pecan-infused Jack Daniels, Cherry Heering liqueur, Sweet Vermouth, and a splash of orange juice shaken and served with an orange twist and bittersweet dark chocolate shavings.

Historic Deerfield Inn in Deerfield, Massachusetts, is known for being a haunted destination, so they’re adding even more to their spooky reputation with a decked out menu this Halloween! On Oct. 31, Champney’s Restaurant & Tavern will offer a menu of creepy items like “Pickled Brains” (florets of cauliflower covered in pickling vinegars) and “Black Bat Wings” (chicken wings rubbed with soy sauce, black food coloring, oyster sauce, black bean sauce and light brown sugar). 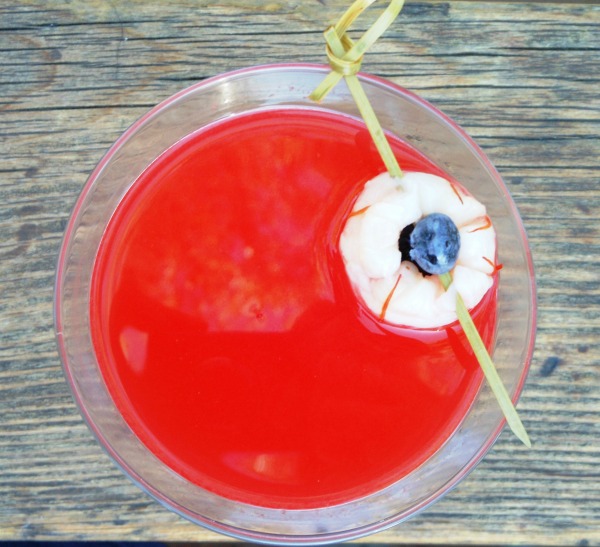 The Hermosa Inn, a luxury, boutique hotel in ritzy Paradise Valley, may be an unsuspecting location for a Halloween cocktail, but this is the creepiest one we’ve seen so far! The signature Eye for an Eye cocktail looks as though a speared eyeball is floating atop the martini glass thanks to a lychee “eye ball.” Make sure to sip this strong cocktail slowly, as it’s made with Veiux Carre Absinthe, Luxardo maraschino and lemon juice.

Fancy cocktails are nothing new, but when you throw beer into the mix, well that’s a different story! Not only has New York Beer Company hopped on the trend of beer cocktails, they’ve created an exclusive one-night-only Halloween beer cocktail called “Vampire’s Blood,” made with Lindeman’s Framboise Lambic beer, Champagne, Chambord Raspberry Liqueur, Stoli Razz Vodka and a dash of Argentine Malbec. Yes, that’s beer, Champagne, vodka and wine all in one drink!

It’s no surprise that Sin City would play host to some innovative Halloween cocktails this year. Head over to the Hyde Bellagio nightclub where, in honor of Halloween, they will offer a “Bloody Sand” cocktail, featuring Antica Formula, Cherry Herring, Dewar’s White Label and sangrita mix served in an Old Fashioned glass garnished with an orange slice. The cocktail will be served over crushed ice to look like it has been stained with blood. 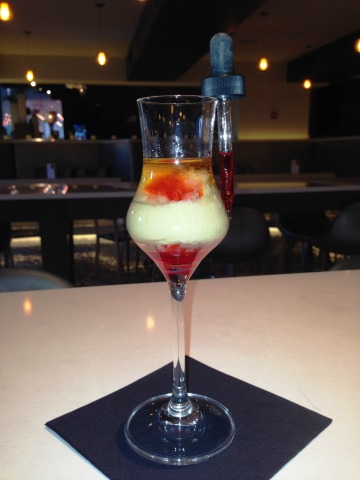 Master Mixologist Ergys Dizdari of contemporary Italian restaurant Filini in Chicago should definitely win an award for the most creative Halloween cocktail… even if the name does gross us out a bit. The “Dead Embryonic Cells” cocktail is made with white creme de cacao, bourbon and Bailey’s, served with a medicine dropper of grenadine.

Serendipity 3, one of New York City’s best sweet shops, has partnered with Ripley’s Believe It or Not! Times Square to create one of the creepiest, yet tastiest, ice cream sundaes we’ve ever heard of! The Ghoulicious Skull-tastic Sundae is served in a realistic half-skull keepsake filled with three scoops of ice cream, hot fudge and red raspberry sauce, covered with goo-filled gummy brains and bleeding gummy bugs, sugar-blackened whipped cream, candy blood-filled skull gummies and topped with a bone lollipop.

OK, so it’s not the scariest menu item in the world, but we think the Dat-O-Lantern cookie at New Orleans-themed restaurant, Bayou Bakery, Coffee Bar & Eatery, is pretty cute and sounds oh-so-tasty. Dat-O-Lantern cookies are Chef David Gaus’ version of a giant Oreo cookie — rich dark chocolate cookies, baked until crisp with whipped vanilla bean buttercream filling that is dyed a vibrant orange. The cookie itself has a jack-o’-lantern icing face.

Finally, not every Halloween cocktail has to be creepy or scary. Let us not forget, Halloween is about treats! Indulge in the quintessential Halloween candy in a grown-up way at The Flat lounge, with their new Candy Corn Corpse Juice — made with pineapple vodka, simple syrup, orange juice and pineapple juice.