Umami isn’t just a trend, it’s a scientific fact. Question: What is it? 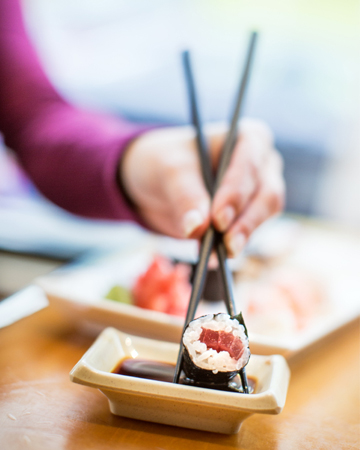 We all grew up learning that humans experience four basic flavors: salty, sweet, sour and bitter. But in the latter half of the 19th century, Japanese chemist and foodie Kikunae Ikeda discovered what would later be called “umami.”

Where does umami come from?

Umami is a Japanese word that means “yummy” or “pleasant and savory taste.” That’s not exactly specific, though, is it? (Warning: This is the science-y bit.)

Umami is how your tongue tastes nucleotides and glutamates. Umami is created by foods that contain an amino acid called glutamate, and/or two nucleotides, guanylate and and inosinate. Umami comes in many different types because of the multiple combinations of these chemicals.

Humans crave umami flavors. There’s a perfectly good biological reason for that, too. Amniotic fluid and breast milk are high in chemicals that cause the umami taste.

The most famous umami flavor is monosodium glutamate, created by Ikeda when he was breaking foods into various components to isolate umami. We all know too much MSG isn’t good for you, but umami flavors like MSG do make food taste better, so getting to know this flavor profile is a good idea.

At it’s essence, umami is savory — described by many as “broth-y” — but it can still be difficult to identify if you don’t know what you’re looking for.

Umami is mouthwatering (think steak or stuffed mushrooms) — as we said before, savory. It coats your tongue and is typically rather mild. It’s unlikely you’d like umami by itself (unless a straight shot of soy sauce appeals to you). It’s best served with other flavors.

To understand umami, think about soy sauce. Most people think of soy sauce as just salty. But if that were the case, why use that on your sushi instead of just salt, which is less expensive? Because of umami. Salt is just salty. Whereas soy sauce, which is made of fermented soy beans, also has a rich, broth-y flavor.

Pay attention to ingredients you know you have tasted or are about to taste. You might even buy a few to get you started. Start with one of these umami foods.