Summertime is the season for “girlier” beers. With lighter hops, citrusy flavors and interesting additions like coriander and lemongrass, these beers are on our must-have list for stocking the beer fridge. 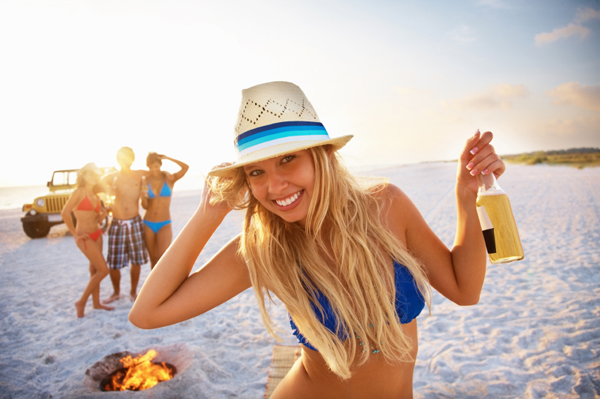 Blue Moon has become one of the most popular Belgian-style beers sold, helping to bring craft beers — especially wheat beers — into the mainstream. Blue Moon is often the first beer of a newfound love affair with craft beers.

The Sunshine Citrus Blonde has a clean, fresh citrus taste from lemon and orange peel and a nice, smooth malt. It has only had a limited release but is a refreshing alternative to their flagship Blue Moon Belgian White.

For those adventurous souls who need a break from the traditional summer fare but aren’t quite ready for the intense flavors offered in craft brews, put down your Coronas and Red Stripes and try a Leinenkugel Summer Shandy. Half beer and half lemonade, the Summer Shandy tastes lemony and heavily carbonated with a thin mouthfeel — almost like soda. They may not be for everyone, but shandies are a summer staple and Leinenkugel makes a good one.

An outstanding example of the farmhouse style, Saison DuPont sets the bar for other breweries. Not long ago, this beer style was nearing extinction but has recently exploded in popularity among Americans, saving a beer revered for its distinctiveness and deep complexity. Farmhouse ales are dry, slightly sweet, earthy and intensely fruity and spicy, but Saison DuPont is a bit darker and heavier than other examples of the style.

Uniquely refreshing , Kona’s Lemongrass Luau is a light, citrusy Hawaiian brew flavored with lemongrass and ginger with an unexpected kick of spice at the end. Not for beer purists, this golden brew is perfect for adventurous drinkers relaxing on a sunny beach.

Sink your teeth into a blueberry beer cupcake >>

Abita, famous for its Purple Haze and Turbodog beers, has a terrific track record of making quality specialty beers that stand the test of time, and the Strawberry Harvest Lager is no exception. The Strawberry Harvest is made with real Louisiana strawberry juice, and it tastes like it. Light, crisp and deliciously strawberry. If you tend to shy away from novelty beers, know that you have nothing to fear from the expert brewers at Abita. Cut yourself a slice of cheesecake and enjoy!

Shiner’s Ruby Redbird is the perfect beer for cooling off after a long day out in the yard. It has a light grapefruit flavor with ginger and other mild spices. While the grapefruit flavor comes through more strongly in the finish, it’s never overwhelming. The extra carbonation makes for a refreshing fizz. It’s the lack of complexity that makes it the perfect way to relax.

Fire up the grill for beer can chicken >>

Dogfish Head Brewery is a beer-brewing asylum of sorts — a group of mad scientists creating “extreme” beers from even more extreme ingredients and somehow managing to produce some truly exceptional beers. Think beers based on algae, antarctic water, crystallized ginger, residue from pottery in a Neolithic village in China and even the residue found in the tomb of King Midas (you read that right).

This particular four-pack is based on the nearly forgotten Berliner-Weisse brewing style, which at its height of popularity in the 19th century had more than 700 breweries, but today has just a handful. This beer is intensely tart and was served as an aperitif or summer quencher with woodruff or raspberry syrup to offset the sourness.

In Dogfish Head’s version, peaches are consumed by the yeast, imbuing the beer with the taste and aroma of peach and balancing the beer. For those with a taste for the unusual and extreme, this beer should top your summer beer bucket list.