Summer is the time for travel, which means amusement parks and fairs have to feed millions. But much like the attractions, the food has to be spectacular. We’ve rounded up the craziest concoctions these creative vendors have to offer. 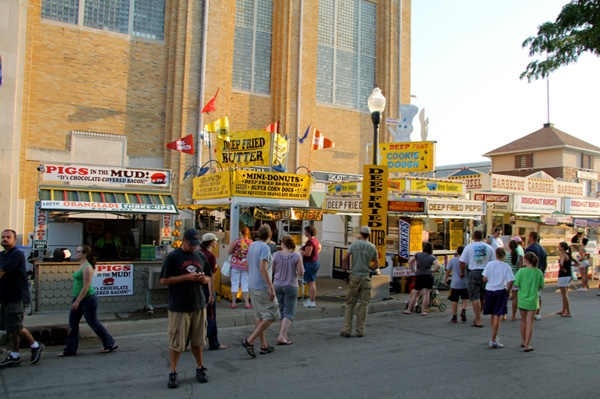 If you’re one of those gals who crash diets before she hits Six Flags under the guise of looking good in your bikini and jean shorts, we’re onto you. Just admit it. You want to pig out on all the crazy foods they have to offer. Make sure you find a park or fair that serves one of our favorites. Warning: Most of them are deep-fried.

At the 2012 Oklahoma State Fair, Layne Concessions took home the silver in the unique sweets category for their deep-fried bacon brownies. In the pastry world, the combination of bacon and chocolate is certainly in vogue, but these guys took it a step further by South-ifying the combo with a deep-fryer.

Each year at the Fair Park in Dallas, the Texas State Fair, aka “The Fried Food Capitol of Texas,” they serve up some of the craziest fried foods in the nation. But our favorite is the deep-fried beer. The beer mixture is enclosed in a salty pretzel-like dough. Mark Zable, who unveiled this tasty creation at the fair in 2012, claims to be the inventor. He won the prize for most creative dish in 2010.

We’re not sure what genius came up with this, but we’re pretty sure he or she should be considered for sainthood. The thing that makes this taco unique is its shell — made of 100 percent bacon molded into a taco shape. To get this delicious treat, you’ll just need to take in a Minor League baseball game in Michigan’s Comstock Park, where the Michigan Whitecaps play.

The cradle of Cosmic Collisions

Every foodie worth their liquid nitrogen has heard of molecular gastronomy. One French theme park, Futuroscope, houses the perfect restaurant for a park with the goal of transporting visitors to another place through 3-D attractions and multimedia. The cradle of Cosmic Collisions is named for one of their attractions. With a perfect sphere of white chocolate surrounded by a pineapple ring to represent Saturn, stars of Oriental star fruit, a licorice nebula and a bubbling black hole of basil sorbet and dark alcohol, this dessert is an attraction on its own. Watch it happen below.

Don’t tell the folks in Louisiana, but Iowa may have them beat on the fried pickle front. If you’re at the Iowa State Fair, stop for a deep-friend pickle dawg. This quartered dill pickle is dipped in regular or spicy cream cheese with either ham or pastrami wrapped around it, then batter-dipped and deep-fried.