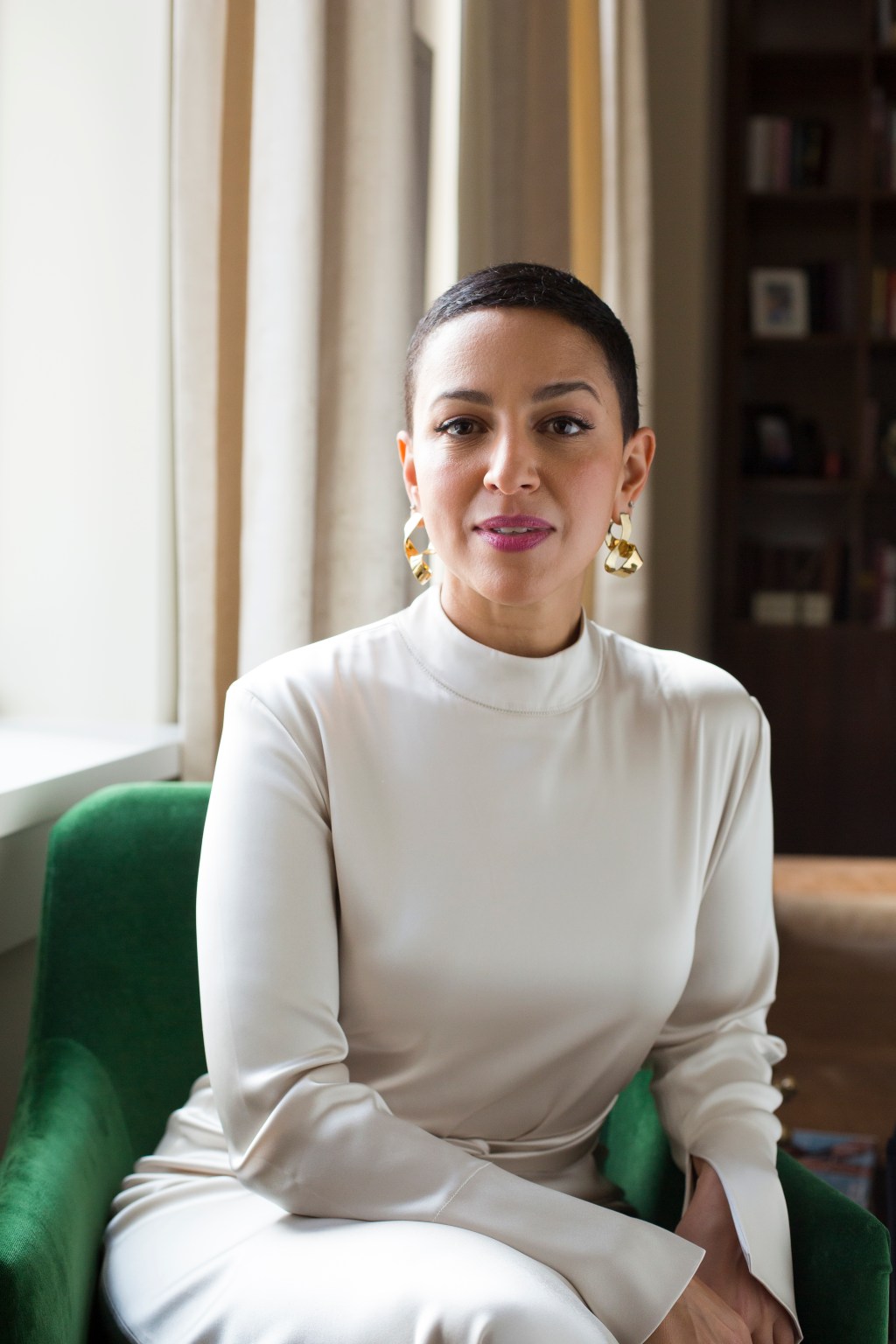 “Mami?” I had on my sweetest most grown-up voice as I sat on the kitchen counter, eight-year-old legs dangling and swinging as I watched my mother cook something from her ubiquitous American women’s magazines. I liked to watch out of curiosity and help when I could out of boredom and sometimes to try to bond with Mom, but the Anglo food was barely palatable. After growing up on Dominican and Chinese cuisine, this new American-food-only-in-this-house menu of meatloaf, overbaked cod, and macaroni salad had me nearly seeing my ribs. At least Mom took our rice cooker with us, so we had white rice available every night, a concession to her beloved first and only son, the very-Wong Alex.

“Mm-hmm.” Mom kept at the confection she was attempting; her plastic apron did not fully protect her skirt from the flour.

Mom paused. Had I pissed her off with such a grand request? We were solidly middle-class but not a family with enough money to take now two babies, curly-topped me, a big brother, and two parents on a flight to Florida to see Mickey Mouse. A girl could dream.

Lupe turned and patted my knee with her floury hand. “You know, maybe one day.”

“Sometimes if you ask the universe for something, it gives it to you.”

Why Didn’t You Tell Me? by Carmen Rita Wong

My mother was instructing me to manifest. I had no idea how it was going to happen, but you’d better believe I prayed and wished and prayed again for it to happen. Her smiley encouragement and surprisingly inspirational quote gave me a weird kind of determined hope. And I was relieved that she didn’t get angry and scold me for being so selfish as to ask for a vacation.

Maybe a week or two later, as I sat on my bed with my head in a book, Mom came into my bedroom and plopped down a shopping bag filled with clothes.

“Well. Your Papi has been living in Florida so I called him up and asked him to take you and Alex to Disney World.” You could have scraped me off the floor, as this was surely a grade school miracle. “I bought you some new clothes because you’ll need to dress nice for the plane.”

I was that little girl with the fur coat and go-go boots again. I dug into the bags. There was a new light-green-and-white-striped sleeveless shift dress with a matching short-sleeved bolero, an outfit that blew my mind. An adorable terry cloth top-and-shorts combo that I can still feel between my fingers, more shorts and tops, and even socks and sandals. It was really happening. My first plane flight, and alone with my big brother, no adults. This was the kind of excitement I needed back in my life. But excitement is the fraternal twin of fear. Florida gave me both.

Papi called our house in New Hampshire fairly often. Always during the day when Marty wasn’t home. Mami would yell for me to get on the phone after she’d spoken to him and he’d yell-ask (he’s a yeller on the phone, always and forever): “What you do in school? How your grades? A’s? You make A’s? What you eating? You eat good there? When I see you, we go Chinatown — get your favorite! Steamed fish, big steamed fish . . .”

Every Chinese American kid knows these questions. Grades and food. Languages of love. And though we saw Papi twice or more a year when we’d go back home to our family in the city, we didn’t see him there that year and I didn’t dare ask why (never ask Lupe why). I’d find out later when he sent Alex and me postcards from his travels to Malay sia, where one of his brothers had settled, and Singapore, where the other had settled. But Florida? I’d had no idea he was there. Serendipity as to the timing of my Disney World request.

“Ay, Carmencita, keep Papi awake, okay! Keep Papi awake! Das your job!” My father was pleading, half-joking, as he made a grade-schooler responsible for avoiding a deadly car accident as we drove in the middle of the night on a Florida highway. He kept nodding off but wouldn’t stop to rest. Alex was asleep in the back seat and thankfully, I was too anxious to be anywhere near sleepy. The whole ride, probably from Orlando to Miami, I watched Papi out of the corner of my eye as his head would fall, then jerk upright, dangerously close to swerving off the road a few times or into oncoming traffic. “Pinch me! Pinch me, ayy-yaaaa!” He grabbed my hand to put it on his arm. Even though I was scared to put my hands on any grown-up, let alone a parent, I pinched and punched Papi’s arm with my little hands as needed for the rest of the ride. And somehow, we made it to our destination without injury.

We did Disney World, where I prayed like I’d never before prayed in my short little life. I was sure that Alex and I were going to die on Space Mountain as we shot through the “warp speed” tunnel. I rode that ride for my brother, who insisted on it. Whatever he could do, I could do, I assured myself. If he liked it, I had to like it too. Serves me right to have been making every promise to God with my head whipping left and right as we shot through a plaster faux outer space, Alex sitting in front of me chillin’ as I screamed the screams of the damned. But wouldn’t you know, as soon as we got off that first ride and walked back out into the sun, my terror transformed to utter euphoria and I begged to go on again, and again, and . . . Alex and I rode that ride eight times in a row that day.

Next, it was SeaWorld, Reptile World (I love snakes and always have), and even Monkey World. But then there was the day that Papi had had his fill of draining his wallet on his two kids in these “worlds.” It was time for Papi to scratch his inescapable itch in his favorite world, gambling. Alex and I spent hours alone in the hot, humid sun of Miami, no water or snacks, sitting in the car outside of a greyhound racetrack– gambling den while our father did his thing inside.

“When is he gonna come baaack?” I whined to my brother. Papi had told us it was going to be twenty minutes or half an hour (“I give you twenty dollars when I get back!”), but we were running into a couple of hours now, sitting on the sticky, steaming vinyl of his sedan. I remember the wet sensation of curls sticking to my forehead and the back of my neck, drenched with my sweat.

“I’m gonna go sit over there,” Alex said as he got out of the car. He was a young teenager but had the look of a man about to crack. My brother was pissed that our irresponsible father had left us two kids alone in a gambling-spot parking lot for hours on a steaming Florida day, no water. At least our windows were open.

“But wait! You can’t leave me here!” I begged after my brother. I was alone in the car, watching men going in and out of their cars to the track and vice versa. Alex didn’t answer me. He strode off to sit on the front steps of the powder blue building. At least I could see him from where I was. I rested my head on the window edge, exhausted and wilted. I knew Alex wasn’t abandoning me. He was angry and in big-brother, man-of the-house mode. When Papi finally returned, there were no apologies. No talk of why or how he’d been gone so long. He was quiet and so were we. I don’t think he won anything. But not all was lost in the long term. I learned a lesson about who our father was that I didn’t know up until that point as I’d never lived with him. That maybe he shared the same feeling toward me that Marty and my mom shared when they forgot to pick me up from the dump, or when Mom would pick me up an hour or more late after school, in the winter when I’d have to wait outside in the cold. Not a priority.

When we came back from our adventures in Florida with Papi, I gave a debrief on the wonders of Disney World to my mother, including the pretty blond friend I had made, the daughter of the motel owners (“They had a pool and the rooms had these little boxes where you could put quarters in and the whole bed would shake!”), and then that we’d been left outside alone in a parking lot while Papi gambled, and how I kept him awake as we drove in the middle of the night. At that, Mami’s face turned dark, and we never had a trip alone with Papi again.

Our father was a gambling addict and living in Miami because that’s where his “business” was. He had gotten me my first plane ride, motel stay, Disney World, and new clothes. It was difficult to be too angry with him when I was young because, like any good manipulator, he compensated with gifts and adventure. Marty couldn’t necessarily compete in that arena. We were far from our once-eye-opening trips to the Met in the city and money was getting tighter as more babies joined the family. Instead, in New Hampshire we had weekend jaunts to the local potato chip factory, the maple syrup maker, apple picking (which I detest to this day), zucchini festivals, and flea markets. But Marty could give something critically important that Papi never could: the American “white picket fence” dream, banana-seat bike riding, suburban life of a nuclear family with a dad who carried a briefcase to work every day and brought home the bacon, along with a stay-at-home mom wearing an apron who rang a bell (literally) for all her wandering kids to come back in the house for dinner. It was Good Housekeeping and Little Golden Books and “Dick and Jane” come to life. At least, in the beginning.