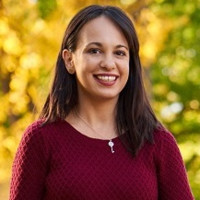 I remember when my 6-year-old son confirmed he knew what the safety switch was on his BB gun, and I nodded as his small hand pointed to the lever.

Related story As an Asian American Gun-Violence Survivor, I'm Not So Shocked by the Latest Attacks

That day, I agreed in my son partaking in aiming for the targets. There were adults present who have gun licenses and safety had been a priority; it seemed OK. I later regretted it. I didn’t like the feeling in my gut as guns became a fixture in my kids’ lives. Even though a part of me was glad he knew how to set the safe position, which prevents a gun from firing, I felt sudden anxiety building. I personally hadn’t spoken to him enough, it seemed, about the danger. What if the safety failed?

Since then, talking about gun safety has been consistent for my two kids, now ages 8 and 6.

I’m from New York, but now I’m raising my kids in Texas, a state with looser gun laws, where it is normal to see a family at a gun range on a sunny Saturday, and kids might try out a BB gun in the open space of their backyard.

As a child growing up in Syracuse, N.Y., I didn’t even own a water gun. My family didn’t hunt. No one brought up the word gun. It just wasn’t a thing at all. Moving to Texas opened my eyes to how casual the word can be and how quickly gun ownership can become the norm. Suddenly, my family had a huge gun safe, firearms were stored in our home, and I had to memorize the safe’s lock code.

Across the United States, 44 percent of adults report living in a gun household, according to a 2020 Gallup poll. For parents, no matter where you live, awareness of gun safety should sit next to learning addition, subtraction, how to spell, ride a bike, and learning basic Minecraft coding. This conversation with my family has become normal because it is necessary, whether or not your kids live in a gun household.

When I was in middle school, I found out through a classmate that a boy our age in a town over had died from an accidental gun wound while simply hanging out at a friend’s house. To this day, I can remember the shock I felt, the confusion that a student my age in a school district nearby had been killed suddenly by his friend accidentally. I was compelled to attend the boy’s funeral, even though I didn’t know him. I waited in the long line, I shook his father’s hand and hugged his mom. I handed her a note with a poem inside, empathizing with hope in my words and sorrow about his short life.

That was the first time I had heard about the dangers of firearms not stored properly in a home. Now that I’m a parent, having these conversations about gun safety feels more urgent than ever.

Talking to your kids about gun safety

“Remember, guns can hurt people,” I have said, and, “They can kill someone.”

“Remember, if you see ever see gun on a table, at a friend’s house, walk away and tell a grown up,” I have said, as a way to bring up the safety in a way my kids can understand.

To get a better idea of what parents should know about bringing up this important and lifesaving topic, I asked Leesa Ross, who faced every parent’s nightmare when her eldest son, Jon, died in an accidental shooting in 2009. Ross is the founder of Lock Arms for Life and a board member of Texas Gun Sense.

“It’s most important to have a talk with your kids like you would for safe sex, sober driving, drug use, or even texting on the road,” she told me via email. “The days that lead up to kids leaving for college or the first week of high school are often the best times for what I call the New Talk.

“The best place to start a talk is in our own homes, riding alongside them, or anywhere we have their undivided attention because the cell phones are silenced,” she continued. “Starting the talk by asking who’s in their group of friends who owns guns is one easy way to begin. We model responsible behavior for them by doing role play.”

When it comes to what parents should know about storing a firearm, Ross said, “We say to gun owners that it’s not a safe home unless there’s a home safe. A quick-access gun safe costs under $100 and keeps guns from falling into the hands of kids and even young adults. Separating ammo from the gun is important, too, even if it’s just locking the gun in a different place than the magazine. A loaded gun isn’t a safe gun, and hiding a gun isn’t a safety measure, either. Cable gun locks make guns safer and impossible to fire while locked. A safe is better.”

Talk to other parents too

Then there’s also being advocate yourself for gun safety in your circle. Ask your friends, family members, and in-laws about the guns they may have in their home, and if they have a gun safe and gun locks. Be the parent that breaks the ice — it is good for everyone to discuss and confirm that the basics are in place for storing guns safely in a home.

“It’s a parent’s responsibility to make sure that kids can’t access guns in the household, because when they do, the results can be deadly,” said Shannon Watts, founder of Moms Demand Action. “Nearly 5 million children in the U.S. live in homes with improperly stored guns, and with the recent spike in gun sales, that risk is only growing. Parents can save lives by storing guns securely — that means locked, unloaded, and separate from ammunition — and making sure that other parents do the same.”

Watts suggests that parents visit the website Besmartforkids.org, which goes through the steps parents and adults can take to normalize conversations about gun safety and take responsible actions that can prevent child gun deaths and injuries.

In this moving video, asks parents to Be SMART: Secure all guns in your home and vehicle. Model responsible behavior around guns. Ask about the presence of unsecured guns in other homes. Recognize the role of guns in suicide. Tell your peers to be “SMART.”

The American Academy of Pediatrics (AAP) says the absence of guns from homes is the most reliable and effective measure to prevent suicide, homicide, and unintentional firearm-related injuries to children and adolescents. But because we can’t expect all the homes our children enter to be free of guns, we need to take steps to make sure they know how to keep themselves safe.