This article contains mild spoilers for season 1 of Severance.

Have you ever wanted to shut your brain off from thinking about work long after you’ve left the office at 5 p.m., so much so that you’d be willing to undergo a medical procedure to do so? That’s the premise of Severance, the new TV show directed by Ben Stiller and starring Adam Scott, Patricia Arquette, and Christopher Walken, streaming on Apple TV+ starting Feb.18, with episodes to follow weekly thereafter. In this futuristic take on what it might look like to sever work from life on a more permanent basis, Severance may not offer answers about how to solve our modern work dilemmas — but it points out plenty of problems in the way that things are now.

Mark (Scott) is a middle manager at Lumon Industries, a company that remains a mystery to its employees (“My theory? The sea,” says one character. “Cutting swear words out of movies,” is another philosophy), but is infamous in the snowy town where it is headquartered for offering the titular “severance:” a voluntary practice that involves separating an employee’s work consciousness from their consciousness outside of work. Sounds like a dream, especially after the hellish few years workers have experienced.

Severance arrives at the perfect time to capitalize on our anxieties around work after two years of working a few feet from where we ostensibly live, “the great resignation,” and “essential workers” being paid a pittance while risking their lives.

Since many of us were asked to work from home on that fateful March 2020 day and have continued to do so for an indeterminate amount of time, work has been a hot-button issue. Parents (read: moms) have had to juggle childcare and working from home, with many opting out of the latter due to the sheer difficulty of the paid and unpaid labor balance. Add to that the fact that many of us have had to take on elder care for at-risk relatives, or worry about their well-being even more than usual.

As the demarcation between labor and life wore away, many realized they weren’t interested in living to work and quit their jobs, moved to less demanding roles, or looked into flexible working conditions, a trend that has been dubbed “the great resignation.” And while there’s a certain amount of privilege baked into those who have been able to take part in this “great resignation,” the trend points to an inescapable truth in a world grappling with the mass disabling event of COVID-19 and long-COVID: the way we work is going to have to drastically shift.

In Severance, it’s not a pandemic that makes people desperate to separate their work lives from their personal lives; each person has a unique motivation for opting in. In the case of Mark, with whom we spend by far the most time, severance seems like a no-brainer (pardon the pun) after the recent death of his wife. Severance allows him respite from his grief between the hours of nine and five, while the rest of his time is spent drinking on the couch.

One shortfall of Severance, created by Dan Erickson and directed by Ben Stiller for the majority of its nine-episode season, is its choice to center a middle-aged white man in this premise — historically, the group that has struggled the least with work-life balance. Helly (Britt Lower), the only woman in Mark’s office, stands out as someone for whom this divide might be more interesting and complex; luckily, the finale seems to indicate that Helly will have a bigger role in a potential season two. Despite this, the show makes a compelling argument by the season’s close: a complete severance of work from life, and vice versa, is not the way forward.

Throughout the season, Severance hints at a lack of support for mental health, care arrangements, identity politics, and creative output for its characters, hinting at why they might have chosen severance to begin with. As so many of us might relate to, these characters could no longer stand to ruminate on the unfulfilled needs of their personal lives 24/7 — especially as work made meeting those needs ever more out of reach — and instead opted to sever from those thoughts completely. But while severance removed the miseries of their outside lives from their working minds, that all-encompassing separation created an even larger issue: Without something to look forward to when they clocked out, work became even more meaningless for the characters of Severance.

As we come up on a century since the 40-hour workweek was widely adopted by most industries in the U.S., Severance doesn’t provide a key for how to make our working lives more balanced — but it does point out truths many of us have already acknowledged about how unsustainable our current work-life “balance” is now. Severance may not have all the answers, but it makes a strong case that we ought to try reconfiguring our current system, lest we end up like the deeply unhappy employees of Lumon Industries — and, indeed, of many workplaces outside of Severance’s dystopian locale.

Before you go, click here to see dystopian TV shows that don’t seem so different from our current world. 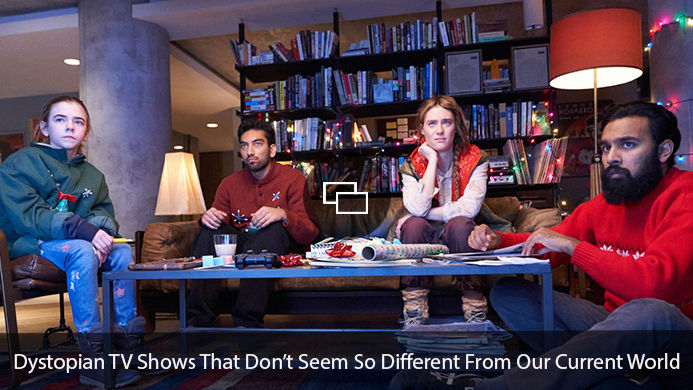