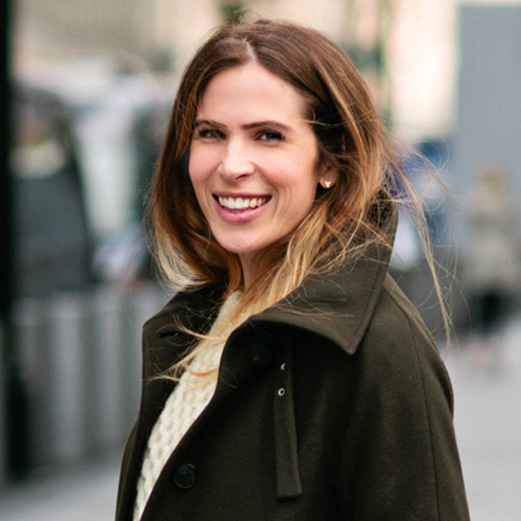 There was never any doubt that I would need to be close friends with my breast pump. Even before becoming pregnant a few facts were very clear to me: I wanted to attempt to feed my baby breastmilk as long as possible and that I’d need to figure out a pumping routine in order to do so. During my pregnancy, the thought of pumping was one of the more intimidating things about my future as a mom. Not the delivery, nor bringing a tiny newborn home, but hooking myself up to a machine that made weird sounds, sucked at my body, and distorted my nipples.

Fast-forward a few months to when my daughter Allegra and I were both grasping the swing of things. I tentatively started a bit of light pumping and bottle feeding so she would be used to it when my maternity leave ended and I would invariably have to return to the office (I commute from the suburbs into Manhattan, so I didn’t have the option of coming home to feed her). Then sometime after month three — and there’s no nicer way of putting this — she got annoying when it came time to nurse. We’d thankfully never experienced problems with latching or other breastfeeding issues that can plague women, but suddenly she wanted to eat, then stop, look around, fool with my nipple, eat a little more, stop, stare at the ceiling and on and on. Add to that the mounting frustration I had with being the sole person who could help when she got cranky every few hours (if I heard my husband say, “Maybe she’s hungry” one more time, I could have screamed), and I realized I should rethink my relationship with the pump.

So started a carefully choreographed routine that would have been easier from the outset if my original pump had been the compact, non-intimidating Medela Freestyle Flex. That initial premonition had come true — I was spending a lot of quality time with a pump — and when you’re that intimate with something you begin to notice its flaws. Subbing in the Freestyle Flex over the past few weeks has proven to be a boon in all the ways. (And even though I’m not commuting into the city due to the current state of things, there’s absolutely no denying that its compact size would have been a life-saver). 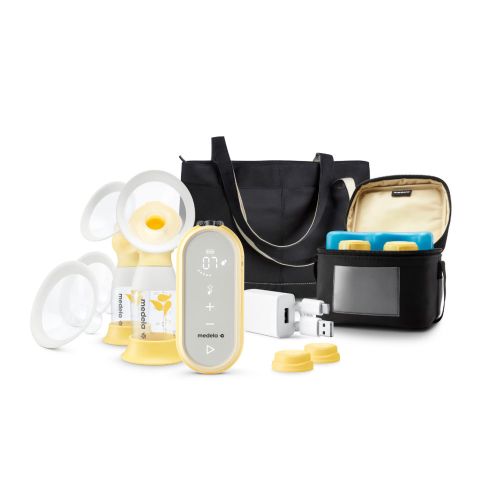 Every friend who has children a few years older than mine has honestly been in awe when I’ve shown off the Freestyle Flex to them — it’s that much smaller than what they had been lugging to and from work. The company has perfected a sleek and simple bag for carrying it, but if you’re devoted to slimming down the amount of bags you’re toting (or just really, really love your handbag collection, like me), the pump is tiny enough that you can tuck it into most larger purses.

I remember taking a girls’ trip with a friend who was still nursing a few years ago and watching, eyes agog, as she took out her pump, set everything up, and got busy before breakfast. That thing was big (and could definitely have contributed to my initial nerves around pumping). The Freestyle Flex would never require that sort of square footage. To wit, places I have successfully experimented with pumping include: my small work-from-home desk, the car, our kitchen (the pump base in my bathrobe pocket while I tidied up). I honestly can’t think of a space too small to not pump with this guy.

The friend whose pumping scarred me? Whatever device she used looked more like a run-of-the-mill piece of hospital equipment. Comparatively, the Freestyle Flex looks like a new video game console: it’s sleek, streamlined and equipped with a minimalist touchscreen. On its face, design might not matter as much as functionality, but attractiveness is a nice bonus when you spend hours staring at something.

When I decided to mostly express and bottle feed Allegra, the pump became like a household appliance. It floated from living room to kitchen to bathroom, staying wherever I last used it. As such, having it be visually appealing actually kind of mattered. The Freestyle Flex is small enough, with rounded curves and a milky white, iPhone-esque face, that you could leave it out without attracting any curious glances from visitors.

I’d bet the friend with the clunky pump would take a look at mine and assume all the design came at the expense of power. This has proven wonderfully untrue. I’ve gotten into a process where I spend 20 minutes actively pumping, a time span that seems roughly on-par with friends who have larger pumps. The battery life is also impressive: I couldn’t previously imagine being unable to pump without tethering myself to a wall outlet. There was the aforementioned bathrobe-and-kitchen pump session, but also the amount of times that I’ve opted to pump from the corner of the couch watching Westworld is also noteworthy (the couch-outlet proximity wasn’t previously ideal for a pumping session). The length of time the Freestyle Flex can go between charges is seriously impressive — I never had pump plans stymied because I realized I needed to be located within cord’s reach of an outlet. Any mamas will understand the value of that: when you get a tiny block of uninterrupted grownup time, you don’t want any surprises to interfere with the agenda.

Amongst all the great parts of motherhood, there’s a fierce desire to retain parts of your “old” self — and to be held back as little as possible. Undeniably, there are some things I just can’t do since Allegra came into my life (like signing up for a workout class on a whim or having a bathtub soak and glass of wine on a Sunday evening). Deciding to rely more on my pump and bottle-feeding was freeing … until it wasn’t due to the reoccurring need to lock myself away to pump. Finding a go-anywhere, portable solution completely changed things. I’m a happier, saner version of myself. Perhaps most encouragingly, the act of pumping-and-feeding has gone from “Maybe I can make it to six months…” to “I’ve got this!”.

This article was created by SheKnows for Medela.