When I first became a vegetarian, there were only a handful of faux meats on the market and even fewer that were actually delicious. But these days, we’re in something of a vegetarian meat renaissance, especially now that several people are turning to meat alternatives due to the meat shortages affecting stores like Costco and Kroger.

Plant-based alternatives are becoming more important than ever and companies are scrambling to put out the tastiest versions of burgers, sausage, chicken tenders and even jerky for vegetarian, vegan and even meat-eaters to enjoy. Some of these plant-based options are definitely better than others, though. Luckily, I’ve done plenty of research to find the best store-bought meatless meats out there. These are my favorites.

Nothing beats sausage for bringing big flavor to a meal, and quickly. Field Roast sausages, which come in a variety of flavors, can be sliced and added to pastas, sautés and stir-fries or slapped on the grill during summer barbecues. The texture and flavor are as close as I’ve found to real sausage.

Beyond Meat gets more press for their Beyond Burger, which is supposed to more closely mimic real beef, but I prefer their Beast Burger. It offers up a whopping 23 grams of protein per serving and has a delicious savory flavor and hearty texture without being a little too much like real meat to be believed.

Gardein Meatless Meatballs are a staple of my diet. They taste pretty much exactly like the non-vegan frozen meatballs you get at the store. They don’t disintegrate when simmered in sauce and can also be toasted and added to salads and sandwiches.

There was a year right after graduating college when I had Quorn meatless chicken nuggets almost every single night. They’re tasty as a snack for us grown-ups, sure, but your kids will really love them.

I truly don’t understand why people wait until Thanksgiving to enjoy the glory that is a Tofurky veggie roast. Surprisingly savory and ever-so satisfying, any cozy dinner party would benefit from having this on the table.

I don’t know how, but MorningStar Farms has found out how to expertly replicate the taste and texture of breakfast sausage in these patties. There’s nothing more comforting than some veggie sausage and pancakes for breakfast in the morning. 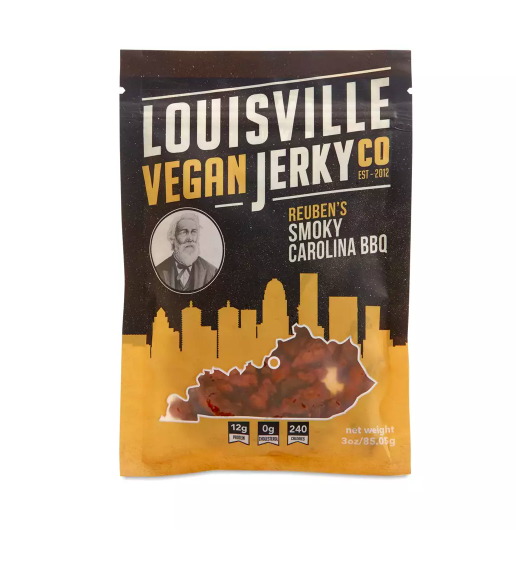 I never thought I’d be around to taste vegan jerky, but here we are! This one is properly “meaty,” definitely satisfying any cravings you have for something you can really sink your teeth into.

It just wouldn’t be a camping trip without a weenie roast or a game night without pigs in a blanket. Tofu Pups are the perfect mild vegan hot dog for you to use in all your favorite applications.

A version of this article was originally published February 2018.