When it comes to celebrities on social media, Chrissy Teigen is the best of the best. Through good times and bad, it feels like Teigen always knows what to say and, even better, she knows how to say it in a way that it makes for an instantly relatable post on Instagram or Twitter. Sadly, recent drama with food writer Alison Roman has Teigen taking a break from Twitter — so while we mourn the loss of new content (for a while!), we’re looking back on her greatest hits to get us through.

Teigen’s knack for distilling the absurd parts of life into the perfect post has made her a social media icon, with fans tuning in for everything from family updates and cooking advice to political commentary and epic shutdowns. To honor this true queen of social media, let’s take a look at some of her greatest hits, from blowouts with President Trump to thirst traps, clapbacks, and more.

1. When she tracked down her own boobs in The Fast and the Furious: Tokyo Drift

“My boobs are in fast and the furious Tokyo drift. I sat on the floor with 200 people in a parking garage in downtown la,” she wrote. “They pulled me to be “girl getting out of car”’and the shot ended up cutting off at my face as they panned up my body. Lmao. can someone find it? I dont wanna have to watch it but its a parking garage scene and I believe the boobs are in a pink bra.”

And what do you know? Within minutes, someone had the shot.

2. When she revealed the perfect way to seamlessly touch up a photo you don’t like

my teeth looked so bad in this pic that I love, but luckily I have my own emojis that make it flawless

3. When she trolled John Legend over his Sexiest Man Alive title

4. When she got real about deep conversations with toddlers

“I just tried to have a talk with Luna and said ‘hey. I just want you to know that you’re a really awesome daughter. I’m so lucky,'” Teigen wrote. “And she said ‘what if my name was poo poo pee pee’.”

5. When she shared this adorable photoshoot footage of Luna & Miles

NO ONE gets my little butts to work it the way @yutsai88 does!! They love him so ❤️😩❤️

6. When she embraced the Daily Mail‘s attempt to shame her

Teigen screenshotted a Daily Mail headline reading: “Chrissy Teigen locks herself in a room to get some ‘peace’ from her crying children while on a family vacation with John Legend.” As a caption, she wrote: “Hell yeah.”

“[L]ol what a pussy ass bitch,” she wrote. “tagged everyone but me. an honor, mister president.”

8. When she updated us on the adventures of Peanut Butter the hamster

stop asking me if the hamster is still alive yes it’s alive!!

“Luna and I bought a hamster today,” Teigen first wrote. “Her name is peanut butter. John is not thrilled, which makes me love her more.”

A few days later, her affection had cooled: “They told us we can feed her anything. My mom said, ‘rice?’ And they go, ‘no, not rice…They also said ‘don’t really touch her for a week. Then touch her a lot or she’ll bite you’ it’s very confusing, being a hamster mom.”

And finally, the inevitable: “welp the hamster got out. just what you all told me would happen.”

9. When she made this extremely valid point about breastfeeding

There’s no troll quite like the kind who changes their profile photo to the very picture they were trolling. #CommentsByCelebs

10. When she clarified exactly why her ass looks so good in this picture

11. When she kept Miles by her side while giving a speech

12. When she gently roasted her hubby

Teigen never misses an opportunity to roast her husband, John Legend, on social media. Recently, she nailed it when she reminded everyone of Legend’s resemblance to the cartoon character Arthur while snapping a cute shot of Luna.

13. When she showed us a new way to prep a salad

14. When she got real about a little-known aspect of being around kids

A snapshot into Teigen’s life by way of a viral tweet.

15. When she took us on the roller-coaster ride of getting brown bananas

We’re calling it now: The search for brown bananas for Teigen’s banana bread recipe will go down as one of the greatest moments in Twitter history.

16. When she might have accidentally messed up her Grammys aesthetic

Listen, we’ve all been there, but on the eve of a necessary Grammys appearance? That’s a uniquely Teigen struggle we can only laugh at and empathize with from afar.

17. When she almost killed us all with the cuteness that is Luna talking

18. When she reminded us what the minimum relationship requirements were

This needs to be everyone’s relationship baseline from now on. Teigen has declared it so.

19. When she gave us a peek into touring life with Legend

20. When she made scrolling on her phone look like art

How does she make scrolling through your phone in bed half-naked (a thing we’ve all done at one time or another) look so glamorous?

21. When she and Dwayne Johnson had this amazing interaction about food and exercise 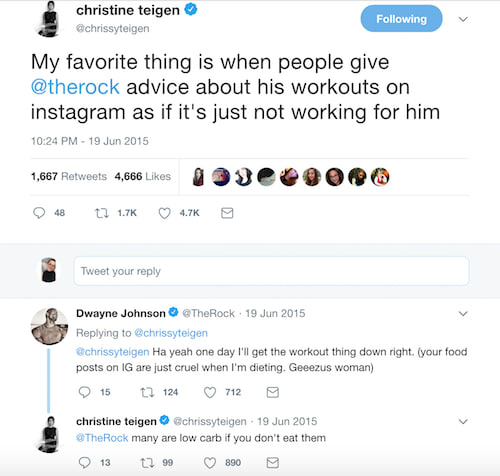 22. When she had a funny moment with Legend

23. When she showed up the upside of taking a bath

24. When she clearly came out on top in an “epic feud”

Don’t mess with Teigen — she bites back.

25. When she had a feisty clapback for the president

Teigen is hardly President Donald’s Trump’s biggest fan, but she really let the shade fly when she let this burn loose less than a month into Trump’s time in office.

26. When she joked about an accurate meme

Teigen knows her memes and isn’t afraid to hilariously embrace them, even when they make her the target.

27. And, of course, when she was real about how tough it is to get the perfect shot

Teigen will go to any lengths to get the best photo, but that doesn’t mean she won’t gripe about it like the rest of us — and that’s why we love her.

Before you go, check out these celebrities who famously aren’t on social media.