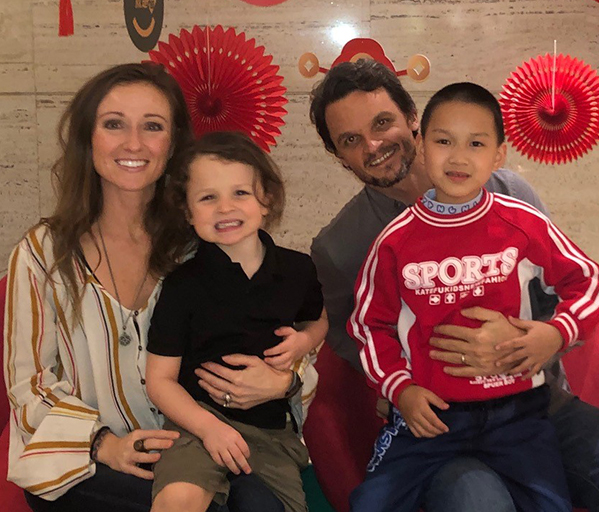 There is a date that’s very important for my family. No, it’s not our wedding anniversary, or one of our birthdays, it’s the day my son Trey was adopted and officially became part of our family, his forever home.

This year was the one-year anniversary of Trey’s “gotcha day,” and we celebrated by picking up dinner from his favorite local restaurant in our hometown in Kentucky: rice and cheeseburgers! The day looks very different than just a short 12 months prior, when we had our first family meal eating traditional Asian cuisine in a hotel dining room in Guangzhou, China. It’s hard to fathom all the events, changes, growth and love that have transpired over these 12 seemingly short months since Trey joined our family.

I remember that day like it was yesterday. Me, my husband Josh, our biological son Tag, who was 5 at the time, and our newly adopted son Trey, then 8, together as a family of four for the first time. Trey had his plate piled so high with a little bit of everything from the menu, and he was eating so fast, I thought he would surely get sick. Tag, on the other hand, refused to eat any Asian food but managed to put together a meal of cheese, strawberries, chicken nuggets and crackers.

Trey spoke no English at the time, so communication was limited to nonverbal cues and whatever we could get our hit-or-miss translator app on our phone to tell him. He was all smiles, though, and seemed very happy to be with us and dining on all the delicious food.

Tag was his usual silly and active self and filled with the excitement of finally getting to meet his brother. He was talkative, bouncing around and trying to make Trey laugh when he somehow managed to bite a hole completely through his finger as he shoveled cheese in his mouth. Of course, the blood and tears started pouring. In that moment, Trey looked up from his meal, picked up a napkin, dipped it in ice water and walked around the table to his little brother to wrap it around his finger. He held pressure on it while he was talking soothingly in Chinese to him and got the bleeding and crying to stop! This moment solidified the start of their brotherly bonding. Then it was my turn to shed a few tears.

Looking back, I had no idea how representative this meal, and specifically this incident would be of the dynamic their relationship as brothers would take on. Even the bleeding Tag experienced held significance for our sons, having both been diagnosed with hemophilia, a rare genetic disease (it affects only 400,000 people worldwide) that makes them vulnerable to prolonged bleeding. Just a decade ago, children with hemophilia weren’t eligible for adoption in China, and many languished in orphanages due to inadequate care or resources. But for us, hemophilia is the very thing that connected us to Trey in the first place.

Josh and I knew we wanted to grow our family, and after facing challenges trying to conceive biologically, we welcomed the idea of adopting. Even then, challenges persisted. The financial barriers alone were steep. We decided to apply for a grant through an organization called Gift of Adoption, which offers the #RAREis Adoption Fund established specifically to help families adopting children with rare diseases complete their adoptions.

Now, it brings me peace of mind knowing both Tag and Trey are able to receive their medication together and attend their semi-annual doctors’ visits with each other. Their shared experiences with hemophilia makes their bond even stronger.

To this day, Tag continues to be the wild, mischievous, fun-loving little brother, getting himself into precarious scenarios, while Trey has owned his role as the watchful, protective, easy-going big brother who takes everything in stride and doesn’t get shaken or upset easily, no matter how challenging the situation. Trey is learning piano and Tag plays guitar. They are both exceptional swimmers and spend hours playing outside together. As brothers, they have their disagreements, of course, but they work it out, and they always have each other’s back.

This year, on the one-year anniversary, our family dinner was full of conversation and laughs from everyone. Trey has learned to speak English this past year and was wearing that big genuine smile that is his signature trait. He doesn’t have his plate piled quite so high, and thankfully there were no finger casualties. We are no longer strangers meeting for the first time speaking different languages; we are family. Trey is Tag’s brother, and he is our son.

For anyone considering international adoption and/or adopting a child with hemophilia, you can find more information by visiting Hand in Hand International Adoptions at www.hihiadopt.org.