Hollywood has lost another legend in Esther Williams. The actress, who was a prominent fixture during the Golden Era of film, died Thursday morning. 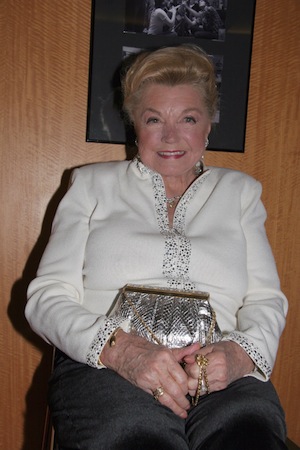 Esther Williams, a swimming champion turned actress, is dead at the age of 91. Her spokesman confirmed that she’d “been in declining health due to old age” and passed away in her sleep.

If Fred Astaire and Gene Kelly ruled the dance floor, Williams was queen of the pool. Her combination of acting and swimming talent made her a box office draw in the ’40s and ’50s. According to Reuters, Williams was often called “Hollywood’s Mermaid” and “The Queen of the Surf.”

Sally Ride, the first American woman in space, dies at 61 >>

Despite her accomplishments, Williams was very humble. She once said, “I can’t act, I can’t sing, I can’t dance. My pictures are put together out of scraps they find in the producer’s wastebasket.” She definitely undersold herself.

Williams was born Aug. 8, 1921 in Los Angeles, California. She spent her youth as a record-setting swimming champ, while dipping her feet into modeling. She made her film debut in 1942’s Andy Hardy’s Double Life, opposite Mickey Rooney. She moved on to more water-centric roles in 1944’s Bathing Beauty, followed by Ziegfeld Follies and Million Dollar Mermaid.

One of her most notable films is Neptune’s Daughter (1949). It’s a musical and romantic comedy co-starring Red Skelton and Ricardo Montalban. It was there that we first heard the Oscar-winning song, “Baby, It’s Cold Outside.” To this day, it’s become a holiday staple, particularly at Christmas.

Other film credits include Take Me Out to the Ball Game, Jupiter’s Darling and The Big Show. Williams leaves behind a great legacy to her family, friends and fans.